It’s a busy time for theater just now. There’s been a gap, mostly, between Christmas and now, during which theaters took down their Christmas trees, stashed away their decorations, and put their Christmas ghosts away until next year, as we all do. But this past weekend was when they’d finally had enough time to put together a new show, and, after that, the deluge. 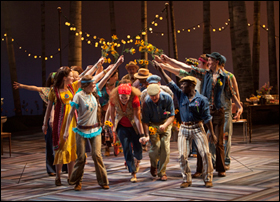 Photo by T. Charles Erickson
“The Winter’s Tale” at the Guthrie

And I do mean deluge. Come this weekend, the Guthrie alone will have three plays going on concurrently, although one is by guest artists The Workhaus Collective, which I shall review later this week, and another is by guest artists Penumbra Theatre, which I shall review next weekend. For the moment, the Guthrie’s own show is “The Winter’s Tale,” by the theater’s playwright-in-resident, William Shakespeare, who never seems to be available after one of his productions when everybody is having cocktails. The Guthrie has done so many plays by this playwright, who I am certain would otherwise languish in obscurity, that it actually has an entire section of its website dedicated to the man.

Everybody likes to point out that “Winter’s Tale” is one of Shakespeare’s so-called problem plays, in part because they’re about problems, and in part because the plays themselves are sort of a problem. This one, as an example, has a sudden and quite extraordinary shift of tone between the first part of its story, a tale of lunatic jealousy that ends in multiple deaths, and its second, set 16 years later, which is a pastoral comedy that resolves the preceding story with coincidence and a miraculous return from the dead. It’s as though Shakespeare got sick of bumming people out halfway through and decided to go a different direction, but I can’t ask him, because the Guthrie refuses to allow him to be interviewed.

“Winter’s Tale” is not one of his more beloved plays — it pretty much went ignored during the entire Restoration — but it does have one of the most famous stage directions in history: “Exit, pursued by a bear.” It’s always entertaining to see how theaters solve this particularly tricky bit of business, and the Guthrie, you’ll be pleased to know, does it quite well, with a massive and almost convincing costume bear. This is responsible for one of the funnier stories of stage catastrophe I have ever heard, and I shall share it at the end of this column.

The play also contains one of the first three recorded instances of the use of a word for a certain marital aid, and it’s always fun to see how a theater addresses the fact — this production, alas, skips through this text quickly in the middle of a lot of stage business. This is the theatrical version of putting your hand over your mouth and dropping your voice a bit so that all people hear is “with such delicate burdens of [mumble] and [mumble].”

So it’s not a popular play, and it’s one that people struggle to understand (one audience member, at a talkback, attempted to summarize the point: “If you kill your wife, don’t worry — she’ll just come back to life.”) It has some weird stage directions and is about as famous for sex-toy talk as for Shakespeare’s typical poetic oratory. It can be quite a drag to sit through — I have seen one previous production where I wanted to locate Shakespeare and throttle him, but he was, I am told, away on business.

So how is the Guthrie’s version? 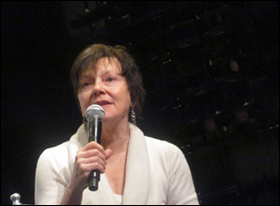 It’s great. It moves along at a tremendous pace, and benefits from terrific performances. Helen Carey will be singled out in every review published, and with cause. She plays Paulina, whose function in this play is to defend the virtue of the accused queen, and Carey brings a regal sort of rage to her role, as though she were one of those very proper English headmistresses that you daren’t cross. She’s all moldering stares and withering comments, and she’s somehow both heroic and terrifying. But I should point out that there really isn’t a weak performance in the play. Especially good, among many, is Guthrie regular Bob Davis, playing Camillo, the jealous king’s right hand man and, for the sake of justice, his betrayer. Davis has a weary, wry humor about him, and, in some ways, he’s our guide through the play’s shift in tone — when the action shifts to the pastoral romance, he’s there as well, grounding it.

Like a lot of Shakespeare, this production takes great liberties with the approximate date in which it’s set, which usually annoys me — it often is gimmicky at best, and sometimes gives me the impression that the director doesn’t trust Shakespeare enough to just throw people into togas or farthingales and let the story do the work. And so this production, which opens on New Year’s Eve with a group of tuxedo-clad men and evening-gown-beclad women dancing the twist to Christina Baldwin singing popular standards, seemed like it might be equally guilty. But director Jonathan Munby, in his first gig at the Guthrie, does trust Shakespeare — he’s exceptionally precise in his direction, communicating the story as much through intelligent staging as through the performances.

And there is the same intelligence in his locating the play in the era of Kennedy’s Camelot. This is, after all, about a king, played by St. Paul native Michael Hayden, whose underlings cannot rebuff his decisions, even when they are very bad ones, which has echoes of Kennedy’s Camelot, and the Bay of Pigs, and the Cuban Missile Crisis. Additionally, it sets the later, pastoral action in the 1970s, and while the story is set in Bohemia, Munby sets it in bohemia — a sort of rural countercultural utopia where everybody is dressed in bell bottoms and polyester and, in the morning, clumps of semi-undressed women will stagger out of a single tent as jug-band music plays. Aside from being great fun to look at, this is an effective device for signaling the play’s tone shift — the period between Kennedy and the early ’70s represented an instantly recognizable epochal cultural shift.

So, anyway, I promised to tell a story about a bear, and will do so quickly. This is one of those backstage stories that actors like to tell, so I don’t know what theater it happened at, or even if it’s true. But the story has a troupe ordering a bear from a mail-order costume house to replace the one they have been rehearsing which, which they created out of carpet remnants. The costume is held up in the mail, and arrives just before the performance, at which point the theater realizes it has accidentally received a Winnie the Pooh costume, with the bear’s head stuck in a honey pot.

They have two options at this moment: to dress their actor as a carpet remnant monster, or to get him into the Pooh bear costume, bring up the stage lights at the back of the theater so that it is shining into the eyes of the audience, and hoping this will silhouette the costume enough so that nobody notices. This is the option they choose.

And, at that moment, the actor trips over the front of the stage and sails into the audience.

Exit, pursued by a bear: ‘Winter’s Tale’ at the Guthrie