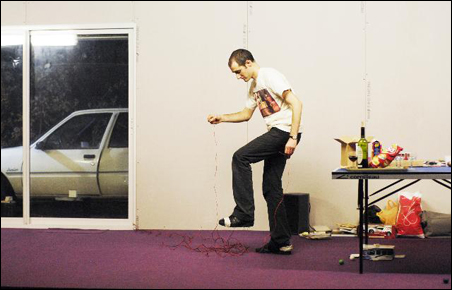 I’d like to talk, very briefly, about a show I saw last week, because it’s been on my mind, and then I’ll launch into recommendations for things to do this weekened.

The show was called “L’Effet de Serge,” presented by a Phillipe Quesne of Viarium Studio, and was the last show in the Walker Art Center’s Out There series. The show has come and gone, so I won’t offer a review of it, but we broke into a discussion group after seeing it, and I was struck by how different other audience members had in their reaction to the show from each other, and from me.

In some ways, it wasn’t a terrifically complicated show. It told of a man named Serge who regularly invites his friends to his house to put on one- to three-minute performances. Those performances are always quite simple and performed to music. One consists of a box placed over a radio-controlled toy car that spins around the room in time to classical music. Serge is very formal about all this, offering his guests wine, sitting them in a chair and briefly discussing his performance afterward. He then thanks them and sends them home, and that’s it.

And that’s pretty much it for the play. He does several performances. Oh, and he has a pizza party at the end.

I read the play as being relatively straightforward. Serge was replicating the experience of going to theater, but on a very small and intimate scale. I found it charming, and immediately started asking myself what sort of small performances I could throw in my own apartment. Others found Serge to be sad, or lonely, and saw the play as representing the failure of humans to connect. Rohan Preston, writing for the Star Tribune, saw the play as containing a critique of modern audiences, who can’t sit still to watch anything longer than a music video. One audience member was frustrated by a few scenes in which people stood around awkwardly, doing nothing.

In a lot of ways, I thought the piece was the least out there of the Walker’s Out There series. It was a rather meticulously composed miniature. But it is a strange piece, in a fundamental way, in that is eschews the rising and falling action of a usual play, doesn’t bother with character development and has several scenes that seem fraught with significance, but that significance is obtuse or illusory.

Audiences struggled to read meaning into it and, in some cases, seem to have superimposed their own experiences onto the story. Theresa Madaus from the chorographic group Mad King Thomas blogged about it, saying, “I wondered, is this my life? Long stretches of waiting for the next tiny excitement? Am I so small? How beautiful each small spark is, and how sad.” And this is similar to my response, in that I do not think most performances are significantly bigger than what Serge had to offer. Performance is generally like what he showed us, a short-lived creation that plays out before a small group of people, and our lives between when something is happening often consist of waiting for something to happen or leaving from the place where something happened, and those interstitial moments, which fill up most of our lives, are often the things we forget or edit out.

Is this sad? I suppose it depends on your perspective. I personally found Serge neither sad nor lonely, and didn’t agree that a human onnection went unmade in the play. His audiences are appreciative, returned, and grow in number, so an artistic connection was made. And we are told these are Serge’s friends, and they greet each other and him warmly. As small as the telling of the story was, in my eyes it was about the making of a successful performance, and I found that greatly hopeful.

All right, while we’re on the topic of the Walker, let me offer up two suggestions regarding the institution. Firstly, they will have the Kronos Quartet this evening and Saturday. Tonight will include music from their most recent recording, “Floodplain,” which quite literally looks at music created in parts of the world that are prone to flooding. This seems like an unusual metaphoric structure for an album, and it is, but its a fascinating one — the cultural need to be prepared for dramatic change because of rising waters. But it gives them a chance to look at traditional music and new compositions from places like Serbia, Lebanon, and especially Egypt, which is in the middle of a very different sort of circumstance of rising water as we speak. Saturday night, the Quartet will perform selections from the avant-garde of rock, electronica and jazz, which should be instructive, and the Quartet is famously good at identifying what’s worth looking into on the fringes.

Also, the Walker will be hosting a talk with filmmaker Jay Rosenblatt, who specializes in short, extraordinarily interesting films, such as “Human Remains,” which looks at five of the monsters of the 20th century, including Hitler and Stalin, through the more mundane details of their day-to-day life. It’s like a reverse image of “L’Effet de Serge,” focusing on the moments between when the defining events happen, rather than the events themselves. So with Hitler, for example, we get a portrait of a sickly man who passionately loved art, in a sort of jejune way, with a dual obsession with bombastic kitsch and American popular culture; no mention is made of war or genocide. It’s sort of a pity that movies no longer open with newsreels and shorts, and I’d like to suggest to local art house theaters that they consider, at the very least, coupling their feature film with an appropriate short. I’d be thrilled to go to a movie and have it introduced by something by Rosenblatt. 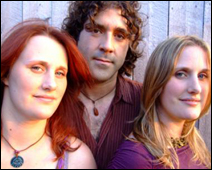 At the Cedar Cultural Center tonight is a group called Vishten, from Prince Edward Island, who play their version of the thoroughly Celtic and French traditional music of Eastern Canada, and so you’ve got reels and hornpipes and whatnot, tightly arranged for such trad instruments as penny whistle, accordion and fiddle. They’re a lively group, and, best of all, they often tap/stomp their feet in complex syncopation with the song they’re playing, which gives the sense that a folk band has spontaneously started tap dancing to their own music.

Altered Esthetics in Northeast is a risky place for me to go into, as I usually walk out with a purchase. So, once I check my bank balance, I either will or will not be going to their “Online (Dis)connect” show, which has its opening reception tonight. It has a number of artists I already like, such as Don Edler, who sometimes makes rather startling structures that seem deliberately incomplete, like somebody started building an addition to their house and just abandoned it. And it’s not clear what the point of the addition was — a hole will be punched in a wall with a long wooden tubelike structure emanating from it, or an old armchair will have what looks to be the skeleton of a gramophone’s external horn extending from its side.

They say you never complete a piece of art but just abandon it, and I appreciate how early in the process these pieces seem to have been abandoned — an illusion, I’m sure, but it gives the sense that somebody might show up at any moment and attach a few more pieces of wood or glue on a panel or something. If our life is mostly the moments between when we we’ve stopped doing something and when we start doing it again, these works seem to be set in those moments, when the thing has been started but isn’t done yet.