Sometimes there’s a knack to being in the right place at the right time. Once upon a time, years ago, I went to the Ernie K-Doe Mother in Law Lounge in New Orleans, which was owned by the wife of the late singer, Antoinette, who served me some sort of shot she had invented that I think may have been intended to tranquilize elephants.

Antoinette had a life-sized statue of K-Doe in one corner of the bar, his hot song from 1954, “Mother in Law,” on the jukebox, and a small group of older women sewing little pillows in the middle of the bar. The women were all that remained of an old Mardi Gras krewe called The Baby Dolls, although they explained that there were actually two Baby Dolls that used to march during carnival, one made up of streetwalkers. They were the other group. They had not marched in decades, but were going to this year, and the pillows they sewed were “throws” — handmade gifts that they would toss out to parade-watchers. One woman, named Lollipop, kept getting her facts wrong, and Antoinette K-Doe responded to all of her comments with an angry look, calling out “Now, Lollipop, you KNOW that’s not right.” And then Lollipop would giggle. 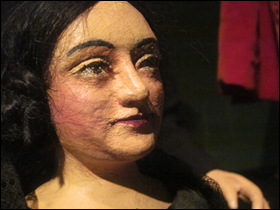 Sometimes you almost have the knack. I almost had it Sunday when I swung by the Hennepin History Museum, which is housed in an old mansion formerly owned by George W. Christian, a milling millionaire who seems to be haunting my column. There, in the mansion’s atrium, a former Aquatennial Queen of the Lakes named Pamela Jo Albinson was setting up a display of Aquatennial history for more recent queens. She had set out her own photo from the ‘62 parade, which showed her atop an arrow-shaped parade float festooned with flowers, with three other comely young women before her, waving from miniature sailboats, likewise covered with flowers. “Local businesses used to be able to afford floats like these,” she said, sadly. “They’d cost millions of dollars now.”

I was fully prepared to hide behind a potted plant or pretend to be a library book to listen to her presentation, but, alas, the more recent Aquatennial queens never showed — oh callow youth! Ah, well. Perhaps I shall return when the next parade happens, as I understand the museum has quite a collection of Aquatennial stuff, including crowns. I hope to get a photo of myself wearing one. Never mind that for now. At least I got to see one of Pamela Jo Albinson’s favorite cartoons, given to her by her husband and drawn by former Star Tribune cartoonist Richard Guindon, which shows an angry older couple arguing, the women seated in a tiara and sash. “You know,” the man complains, “life hasn’t been any bed of roses for me, either, being married to an ex-Aquatennial queen.”

I was at the museum for a purpose, anyway. They have an exhibit whose very name seemed to call out to me, like a siren on the rocks, beckoning me come hither, come hither: “Curiosities and Remnants I.” It’s a wee exhibit, consisting of maybe two dozen items, as most, in one single room. But it’s probably stuff that wouldn’t fit into any formal exhibit, like a giant bellows, or handmade dolls of Gov. and Mrs. Alexander Ramsey made from potatoes, dried apples, and papier mâché. I gravitated toward items that, were I to own them, would have me labeled a ghastly eccentric, as Crispin Glover’s collection of diseased eyeballs made of wax so labeled him. I’d buy them anyway, given a chance.

There’s an old apothecary’s cabinet, from back when treating illness seemed a lot more fun and a lot less effective. It was filled with containers of herbs, including sea onion, which its label helpfully let us know could be used as a diuretic, and could also be used to poison rats. Mostly, as I understand it, Victorian druggists offered tinctures of alcohol, herbs and laudanum, whatever ailed you. They also accidentally produced the modern cocktail and soft drink, and it’s one of those historical trades where it is impossible to weight the good against the evil and discover whether they balance. I do love a good cocktail, and I love Dr Pepper, which was created by a pharmacist to taste like a Victorian pharmacy smelled — like a mix of herbs. Is it worth decades or even centuries of opium fiends? Maybe. Maybe. 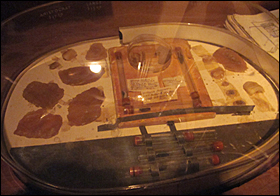 The exhibit also has a glass case containing something that the placard itself describes as “The infamous Podiatrist specimen collection.” I can’t be sure whether it is the collection or the podiatrist that was infamous — perhaps both, as what he collected were warts, ingrown toenails, and various callouses and bunions. There they are before you, preserved for posterity: chunks of other people’s feet. Now that’s an exhibit!

Just a few blocks from the history museum is a bantam second-floor art gallery called Stevens Square Center for the Arts, and they have an exhibit now called “The Nature of Romance.” Despite its name, the exhibit could be a companion piece to “Curiosities and Remnants I.” This is an exhibit filled with illustrations that might have been pulled from a Victorian medical journal and preserved animals, and it would hardly surprise me to catch Crispin Glover hiding in a corner, peering at the show with four eyes — his own, and two from his diseased eyeball collection, one in each hand.

There’s even an apothecary’s cabinet, albeit a miniaturized version, by artist Michael Wong. Instead of rat-killing herbs, each of the cabinet’s hundreds of tiny bottles offer a different sort of love, such as “tender love” and “infinite love.” Come to think of it, this could serve as rat poison, presuming a rat could die of a broken heart. 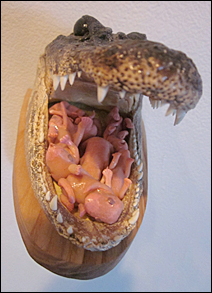 Near this is a piece by an artist named Raina Belleau called “Safe Keeping,” which consists of a small alligator head — an actual alligator head — mounted on the wall, it’s mouth filled with tiny plastic babies. As an art critic, I am suppose to ponder the meaning of such a piece, and its place in art history, but I’d rather enjoy this piece on the most superficial level possible. It’s an alligator head filled with plastic babies, and that’s exactly the sort of demented creativity that I appreciate.

Also on hand are two paintings by Alex Kuno that look very much like they are taken from the pages of a musty children’s book of fairy tales, but I think I might be a little afraid to read the tales that accompany them. One, titled “Into the Forest,” shows a fez-wearing, white-gloved dog astride a sled that carries several large pieces of luggage. He points a finger and seems to be barking out orders of “mush” to the two who drag the sled: exhausted and terrified-looking children, their breath coming out in fast pants of fog, up to their knees in the snow.

If I can raise the money, I intend to build a parade float that looks exactly like this, and enter it into the Aquatennial.