I know there is a presumption that we arts critics are not fans of football. It’s presumed we know nothing about the pigskin, the gridiron, the bringing of the wood. It is supposed if we watched the Superbowl at all, it was only to see Christina Aguilera fumble the lyrics to the national anthem, and then we would wander away to make ourselves gin gimlets and discuss Proust.

But I tell you this is entirely unfair. True, I didn’t watch the game yesterday, I wasn’t even aware it was on until I looked up at a bar and saw Aguilera’s chin wobbling with uncertainty on the television screen. I don’t know who played, or who won, and I’m not even sure why they call it the Super Bowl. Do they go out bowling afterward?

But there is a reason we critics would be interested in the Super Bowl, and it’s something I stayed up late to watch online: the commercials. Although most only last 30 seconds, they tend to cost about as much as a feature film, they get seen by more than 100 million people, and they get discussed for weeks and sometimes years later. As popular art forms go, they’re about as important as anything produced today. And, when well-done, they are master classes in narrative minimalism, telling an entire story in the length of time it takes me to look up whether Super Bowl is one or two words.

There was, for example, the ad for Living Social, in which a Patrick Warburton-lookalike makes use of coupons to change himself from a mountain man to a transvestite. It was a very clever commercial, and also an unexpected one, as you wouldn’t expect an ad directed at a Super Bowl audience to suggest that a side-benefit of their business would be a loss of masculinity. Heck, right toward the end there, before he puts on a dress, he seems to have turned into a theater critic.

And it wasn’t the only commercial to toy with the idea that a daintier version of masculinity is somehow desirable. There was an Audi commercial called “Release the Hounds” in which a pair of Thurston Howell-types attempt to escape a prison that looks like the plummy interior of an English social club — one actually carries a stuffed dodo with him to aid his escape. The warden’s attempts to stop them involve releasing a large number of very well groomed Afghan hounds and playing the music of light-jazz favorite Kenny G.

Budweiser took a similar tack with its spaghetti western commercial in which a black clad desperado threatens to shoot up a saloon until he gets a Bud, and then spontaneously launches into Elton John. I don’t know what to say about this. I don’t expect that it meant to imply that beer will make you likely to participate in singalongs of the music of a man who is married to filmmaker David Furnish — I suspect instead it’s a riff on the scene in “Almost Famous” when the fictional band Stillwater bonds over the same song. Nonetheless, it is a bit like Jack Palace paused “Shane” for a few moments to dance along with Madonna’s “Vogue.”

I can’t help but wonder if this isn’t a reaction to last year’s Super Bowl ads, which collective seemed to paint a portrait of modern romance consisting of childlike men straining against the spoilsportism of their humorless, scolding girlfriends and wives. (One example: The Dodge Charger ad that featured a contemptuous male narrator describing what is presumed to be an inventory of the humiliations men must suffer at the hands of their mates — “I will carry your lip balm” — as forlorn male faces look at the screen). This year, men weren’t at war with women so much as they were at war with their own desires to not be so very butch.

That’s not to say there weren’t female spoilsports at all — that’s one of the primary roles of women in modern narrative fiction. Male characters are reckless and have fun, female characters stare at them like they were infants and, charitably, offer a civilizing influence. Uncharitably, they just make things less fun. It was ever thus, and, as long as Hollywood and Wall Street are ruled by men who desperately wish to be Don Draper, Sic semper girlfriendis.

The most egregious example of this was the Pepsi “Love Hurts” commercial, in which a scowling wife physically abuses her husband when he cheats on his diet, and, at the end, when he leers at a passing jogger, she accidentally assaults the jogger. Oh, Mylanta! Such hilarity!

But the controversy du jour is not about unconscious sexism. No, instead Groupon, the popular coupon site, produced a series of commercials that seemed to mock social ills and recommend mindless consumerism as an alternative. One example: Their commercial titled “Tibet,” in which Timothy Hutton discusses the very real Genocide against the Tibetan people, and then switches gears to talk about buying fish curry from a Tibetan restaurant. It’s a puzzling commercial in a few ways, not the least of which is that Tibet is landlocked and fish curry isn’t a typical example of their cuisine.

It’s hard to say precisely what Groupon’s people were thinking. It may be that they thought it would be funny to start an ad as though it was one of those desperate pleas for aid that go out on late-night television, accompanied by pictures of starving children or abused pets, and then suddenly change into a mindless recommendation of where and how you might spend your money. Heck, it may even have been intended as a parody of that sort of thing — it does increasingly seem like people are mistaking their capitalist impulses for activism, defining their social action entirely by how cleverly they spend their money. But Groupon misfired badly, in part because it started the ad with very real, and very serious, social ills. 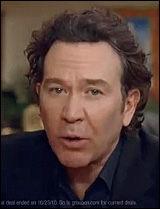 There’s another possibility, as Groupon is a web-based service. There’s an unfortunate convention online called “trolling,” which, if you’ve spent any time in front of a computer, you’ve probably been victimized by. It’s the act of deliberate provocation to illicit a response, and it’s usually done just for the sheer perverse pleasure of watching people get their dander up, which, in the Internet world, enjoys the name LULZ. I’ve never seen it work as a marketing strategy before, and it seems like the sort of thing that might backfire badly, but, for whatever it’s worth, Groupon seems to be enjoying the most attention of all of the ads from yesterday’s game.

I prefer not to give trolls attention. And so I will point out another ad that seems intended to redefine masculinity, the Stella Atrois commercial in which Adrien Brody mimics the singing style of Chet Baker in a smoky club, occasionally drifting into French — French! — as women look on and weep. We men could be the blank-faced victims of femininity from last year’s commercials, suffering in pathetic silence until we get the chance to speed in an overpriced muscle car. Or we could be the eagle-beaked, floppy haired European sophisticate Brody plays, which, frankly, seems a lot more fun. To me, at least.

But then, I don’t watch football.