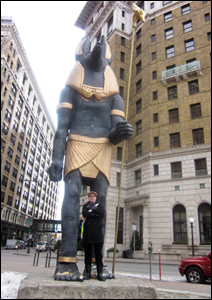 Standing sentry in a corner of Landmark Plaza in downtown St. Paul, between the St. Paul Hotel and Landmark Center, is a 26-foot-tall statue of the Egyptian god Anubis. One imagines the nearby statues of F. Scott Fitzgerald and Lucy from the Peanuts cartoon have spent the past three months, since the jackal-headed god’s arrival, staring at it in wonder, as Anubis himself watched the days grow colder and the snow come in, and thought to himself, “What did I do to deserve this?”

Well, Anubis has been fulfilling a function that dates back to the American circus, when a daredevil would arrive in town a few weeks in advance of a show and do something remarkable, such as bury himself alive, and this would drum up interest in the forthcoming tent and three rings. Anubis, of course, did not need to bury himself alive. Being Anubis, and weighing 26 tons, all he had to do was stand and look impressive. Which, when you’ve got the head of a jackal, is something you’re pretty good at, even when the winds whip the snow like frozen darts and you long for the fields of Aaru.

But what is Anubis promoting? King Tut at the Science Museum of St. Paul, of course, the boy pharaoh whose stuff occasionally tours the world, inevitably setting off some sort of craze for ancient Egypt. This has been the case since 1922, when is discovery caused a sort of popular panic. Suddenly flappers took to rimming their eyes with kohl in the fashion of the ancient Egyptians, and the Book of the Dead became became a publishing sensation, and Deco artists began tossing Egyptian motifs into their illustrations. The last major tour of Tut was between 1976 and 1979, and suddenly Americans were touting pyramid power (if you put a dull razor in a pyramid overnight, it sharpened itself!), funk bands were dressing in the style of ancient Egyptian royalty, and Steve Martin sang an ode to the king on “Saturday Night Live.” I shall be eager to see the effect this new Tut tour has on Americans — we are a deeply impressionable people.

The Science Museum was kind enough to let me through the exhibit on Saturday, as well as giving me a photo pass to take pictures of the items in the collection, which is not supposed to be photographed. What resulted, of course, was a series of misadventures during which I would point my camera at a scarab amulet and a guard would hurry up to me to tell me I couldn’t do that, at which point I would wave my pass at them and they would back off, which is precisely, I expect, what Tut’s amulets were meant to do for him when he passed into the valley of shadow and the ghastly He Who Dances in Blood set upon him. There is no chapter in the Book of the Dead for press passes; it’s time one was added.

The exhibit itself, I think, can be a challenging one for Americans. We don’t have a very prolonged sense of history. I recall being in the Napoleon House in New Orleans when an American was showing his British friend the building, and explaining that it dated back to 1797. The British man nodded, unimpressed, and then said “That seems like a long time to you, doesn’t it?” Well, yes it does, but I understood, as I had spent a year of my childhood in England, and just down the street from my house was a church built in the 12th century, and a quick car trip would take me to Stonehenge, built in 2500 B.C. We Americans don’t have the same sort of everyday contact with the ancient, and so it can be a bit of a challenge to wrap our heads around the fact that Tut was buried in 1324 B.C., and was mostly undisturbed until two Englishmen named Carter and Herbert dug him up 3,246 years later. It’s a dizzying amount of time to think about, about 130 generations of humanity. Most of us can hardly remember what movies we saw last year.

But even without this sense of ancientness, which is so foreign to us in the U.S., it’s an awesome exhibit, and one that sort of makes you wish you could quickly become an Egyptologist, perhaps with some sort of injection taken from the RNA of a graduate student in the subject, so that you could go through the exhibit and appreciate it more. It opens with statue after statue of pharaohs, and the names sound familiar, especially Ramesses II. This is the guy the Greeks called Ozymandias, the King of Kings, and Percy Shelley wrote a poem about his statue, and Anne Rice made him the main character in her novel “The Mummy,” and he is widely thought to be the Pharaoh in the book of Exodus, which means he was once played by Yul Brynner onscreen — and there it is, something we Americans can find impressive.

And this is before we even get to the stuff pulled out of Tut’s tomb, which include a coffinette that looks like the boy king, and once contained his stomach, and an actual bed upon which the boy king slept, which seems cozy, like a wicker chaise lounge one might set alongside a pool to nap and tan in. There are sandals made of gold that were placed on the boy king’s feet after his death, and gold fingertips and toes that were placed on his hands and feet when he was sealed into his long rest, which served some sort of magical function, perhaps allowing him to take photos of the afterworld.

There’s gold aplenty here, as well as alabaster and colored stones and semi-precious jewels; Egyptian royalty liked to live a bit of a gaudy lifestyle, although their design sensibilities are faultless, and, because they inspired the artists who created modernity, they seem somehow very chic. It’s impossible to do them full justice by offering a written description, and I don’t have enough room to do so anyway, so below you’ll find a slideshow of the photos I took at the exhibition.

A fellow named Karl Pilkington saw this show, or a similar one, recently in London, and I believe he may soon be going to Egypt to visit the pyramids, and he’s a hard man to impress, even when shown the wonders of the ancient world. I mention this because Pilkington has become a very unlikely star, and I have been watching a travel show starring him that is half educational, half an extraordinarily mean-spirited prank. The pranksters are Ricky Gervais and his writing partner Stephen Merchant, who discovered Pilkington and made him a celebrity, and the show is “An Idiot Abroad,” produced by Sky1 and available via the Science Channel. 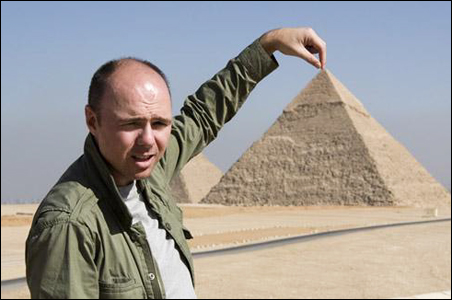 Courtesy of Sky1
Karl Pilkington in “An Idiot Abroad”

You may already have heard of Pilkington, as he has been the subject of an extraordinarily popular series of podcasts (available through iTunes) that consist entirely of Gervais and Merchant quizzing the man about what he thinks about the world, and then laughing at his responses. You see, Pilkington, a genial, round-headed man, is something of a wonder himself. He is a very deep thinker, but he is also, as Gervais puts it, an idiot. Pilkington is a man concerned with comfort more than adventure, and he’s not one to be bothered by facts, so his investigation of the world consists of exactly two questions: Do I understand it? If not, why does it bother to exist?

As you might imagine, Pilkington doesn’t especially like to travel, and so Gervais and Merchant decided to send him out to see the most wondrous sights in the world, including the Taj Mahal in India, Petra in Jordan, the Great Wall of China, and the Chichen Itza pyramid in Mexico. He tends not to be especially impressed by any of them — his comment on the Great Wall is that you can see it from space, but who would want to? And because Gervais and Merchant take a sadistic pleasure in pushing Pilkington outside his comfort zone, they also find precisely the things for him to do abroad that will be the most uncomfortable and bewildering for him. These include eating disquieting food: He has been subjected to toad and sheep heads boiled in milk, as well as eating a Mezcal worm in Mexico which left him gagging for what seemed to be three solid minutes.

If this also sounds as though it can be a bit maddening, well, yes it can. But Pilkington has a strange genius to him and a deadpan sense of humor (in one episdode, an Indian guru declares him a “laughing saint”), and sometimes his most preposterous points suddenly make sense. Prior to visiting Petra, he declared that he’d probably rather live in a cave facing the building rather than live in the building facing a cave.

And so, to his horror, Gervais and Merchant make him do exactly that: They discover people do live in the caves around Petra, and arrange for him to spend a night in one. And, as it turns out, Pilkington loves it — it’s warm and has comfortable bedding, and he can enjoy a drink before he sleeps. And he wakes to see one of the wonders of the world, whereas, were he to live in Petra, he would wake to see a cave, and his own round head observing him from a cozy bed alongside the embers of a nice fire.