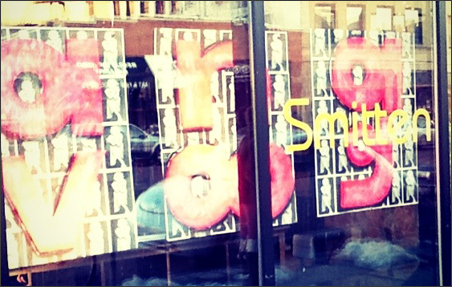 If you were online at all during the late ’90s you probably remember Ana Voog. Heck, you may even remember her from the local music scene, when she was frontwoman for a band called The Blue Up?; if you buy freeform crochet hats, you may have an ongoing relationship with Voog, who creates such items and sells them online.

Back in the late ’90s, she was a pioneer, and I think we’re right now at the point when we can understand what she was pioneering. The Smitten Kitten has a small retrospective of her work right now, and it’s mostly, or entirely, images taken from Voog’s experiment in living her life online, a project called anacam. She wasn’t the first to do this — she was predated by a college junior named Jennifer Ringley, who installed a webcam in her dorm room and broadcast unedited images of her day-to-day life, which were frequently mundane but occasionally quite intimate. Voog did much the same, except with more art — she had, and I imagine still has, a taste for costumes, and sometimes created elaborate performances for her webcam. And her work wasn’t occasionally accidentally explicit, as Ringley’s was. Voog made extensive use of nudity and eroticism, which is probably why images from her webcast are at Smitten Kitten, a store better known for its sex toys and supplies than as a gallery.

We can’t reprint many of her images here on MinnPost — she not only broadcast the birth of her first child, she also broadcast the conception, and there are images from this on Smitten Kittem’s walls. And I remember criticisms of Voog for this sort of thing — in the early days of the Web, it was fast getting populated by the adult industry, and, to some, Voog seemed like a strange web hybrid of adult performer and pure exhibitionist. What was the difference, her critics wondered, between her webcast and the millions of gigabites of online data that were similarly being used to exploit the spectacle of female pulchritude, except that Voog, in her costumes and with her art-school rhetoric, seemed pretentious.

I don’t mean to address these criticisms, as they never really interested me. The difference was, for me, self-evident anyway. Voog wasn’t looking to make a fast buck by showing some skin — there would have been faster and more effective ways to do this anyway than to constantly broadcast her life. She claimed that she wanted to live online, and I see no reason to doubt this. Moreover, she didn’t treat the web as some sort of accidental interloper, as Ringley did — like it was some stranger who stood in the corner of your room and watched you go about your business. Voog treated the web as a broadcast medium, and she treated her life as a show.

This is where I think she was the real pioneer, because, nowadays, in this future of ours, quite a few of us have turned into Ana Voogs. Well, at our best we have. There’s an entire generation of people who came of age during the dawn of the Internet, and whose understanding of themselves as public figures is radically different from that of  the previous generation. Our notions of privacy have been changed, to a degree that hasn’t really been well-documented yet. But, thanks to sites like Facebook and Twitter, and thanks to Flickr, and thanks to blogging platforms and YouTube, there are millions of people now who live their lives, to a very large extent, publicly and online. Most of us are Jennifer Ringleys — we’re happy to document our bland everyday, and if we are occasionally accidentally interesting or titillating, it’s only because, once in a while, people can be interesting or titillating by accident. But Voog never wanted it to be accidental, and, whether you enjoyed her work or not, I think she deserves credit for this.

We are now in a future where everybody is their own broadcaster, and their life is their show. It’s nice when people try to make sure their life is a show worth watching.

Speaking of which, I went to an odd locally made film last night that I am going to talk about for a moment, even though, as far as I can tell, there are no immediate plans to show it anywhere else. I’m sure it will pop up again, though. The film is called “tonight, we stay indoors,” and is by a local filmmaker named Joe Larsen, and he has, functionally, made an ’80s slasher film, of a sort. It has all the elements, many borrowed from John Carpenter’s “Halloween,” including a psychotic killer, a former psychiatrist who is now hunting his patient, a series of brutal murders in a single location, and a “last girl” with a man’s name, in this case Davi (Natalie Sosnay), who confronts and bests the murderer at the end. From my description, this could be any of the tens of thousands of low-budget slasher films that came out in the ’80s and ’90s.

Except it is nothing like them. The film seems to have been shot with the lowest budget of all — I would guess about $6 — and how do you make a slasher film when you don’t even have the money for Karo syrup to double as blood? Well, you set the film after the slashing, when the last girl’s life has been reduced to sitting in her apartment and occasionally going to Kmart or the Mall of America, where she goes because she is not recognized. And that’s it for what we see onscreen. Come to think of it, it’s all very Jennifer Ringleyish, just a series of long, static shots of a young woman doing mundane things.

But the whole of it is narrated by a vaguely distracted voice that sounds as though the narrator were speaking far too low and far too close to the microphone. The narrator seems, at first, to be a traditional omniscient, offering up detailed descriptions of Davi, her town, and the events of the murder. But the narrator is a little off — his discussions often get lost in the nuances of and minutiae of detail, which sometimes seems to offend him. At one moment, he lists every brand of Pepsi that is no longer on the market, as though their presence in our lives, and now absence, were some betrayal. And it’s a long list — it goes on for minutes. Further, the narrator sometimes admits he’s not sure of the facts, although he then goes on to confidently discuss the private thoughts of Davi, the survivor.

And, once in a while, his narration is interrupted by plaintive, pained singing over a spare guitar, usually while Davi does nothing much at all — in one scene, she sort of obsessively spins in place on her desk chair in front of her computer, the way children do when they are very bored and have discovered that chairs like these swivel. Sometimes when you cry you sound like you’re laughing, the singer tells us, and I don’t know which it is until I see your face.

All this could get to be a bit much, but Larsen has kept his film to about one hour, which is about perfect — long enough to tell an entire story, and, especially with the narrator, create and sustain an intriguing, legitimately creepy atmosphere, but not so long that these things start to show their limitations. I’d like to see more films like this, films that aren’t about the sort of momentous, transformative narrative moments that filmmakers love to indulge, even when, as with slasher films, they are primarily grim fantasies.

Instead, it’s really interesting to start after those moments have ended, when things have settled back into something like normalcy, watching as the characters from the big event try to figure out their lives after the fact. With Davi, she doesn’t do much of anything. As the film’s narrator points out, there’s not much reason for her to go outside. All of her friends are dead.