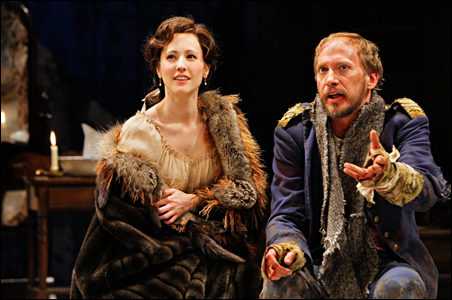 Thus it ever was. Playwright George Bernard Shaw included this play in a collection he called “Plays Pleasant” — you want the scolding, socialist, sharply intellectual Shaw, look to the plays he collected as “Play Unpleasant.” Not that they’re actually all that unpleasant. I was afraid of Shaw for years — his white-bearded, scowling visage and reputation as an author of political jeremiads put me off his work, until I got around to actually reading him, and realized that he was also the possessor of a puckish and often quite daffy sense of humor. Whatever other qualities Shaw’s plays may have, you can generally expect them to be funny.

And so “Arms and the Man” defies its setting, which is the Serbo-Bulgarian War, in favor of what superficially seems to be a drawing-room comedy of romance and manners, in which a young society girl falls for a Swiss soldier of fortune who hides out in her house. And this is a play that contains a character, a Bulgarian soldier named Sergius Saranoff, who is so broadly caricatured that when Laurence Olivier played him for Tyrone Guthrie, he despised his own character, and had to be chastised by Guthrie that Olivier must find the love for his character that Saranoff feels for himself, which is epic.

This production, directed by Ethan McSween, hits the script’s cartoonishness hard, building elaborate bits of business around foolish actions. Saranoff, as an example, is played by Michael Schantz as a swaggering, ridiculous, pompous, preposterous creature, wrapped in fur and tight-fitting, embroidered military garb, bearing a profound mustache that stretches from ear to ear. He struts the proscenium stage like it was a catwalk, and he never simply stands still — he strikes exaggerated heroic poses. He’s marvelously funny in the role, and what other choice was there in playing it? You can despise the character and make him wretched, or, as Guthrie himself insisted, you can have fun with him.

And so it is that the whole cast has fun. The female lead, played by Mariko Nakasone, shares Saranoff’s taste for false heroics and posturing, but she offers a feminized version — when upset, she will leap with great ceremony onto a fainting couch, and she likes to press her hand to her head and turn away from whomever she is talking to, a theatrical gesture whose theatrics the character accidentally exaggerates. In some ways, it’s too bad she doesn’t end up with Saranoff, as they’re perfect for each other — at least, the people they pretend to be are perfect for each other.

But along comes the Swiss soldier, played by Jim Lichtscheidl, to throw a wrench in things. He’s the sort of exhausted and thoroughly utilitarian professional soldier whose pronouncements sound cynical, but Shaw clearly intends them as simply being the honest claims of a man with a lot of experience. So he doesn’t carry bullets, but chocolate, and tends to turn and run at the first sign of danger. All of this has him seeming like a coward — especially in Nakasone’s eyes — but, over the course of the play Shaw reveals that he in, in fact, a superb soldier. Lichtscheidl avoids caricature with this role — it isn’t necessary, as the soldier, Captain Bluntschli, possesses one of Shaw’s most potent comic skills: He seems like he’s telling a joke, when he’s simply expressing the truth as clearly as he can.

There’s another character in the play who likewise avoids caricature, and if you’re looking for Shaw the political firebrand, you’ll find him expressed through this character. This is Louka, a maid, and, as played by Summer Hagen, she’s a ferocious creature. She has designs on Saranoff and eyes above her station, and she’s cutthroat about the subject, willing to blackmail her employers if it gets her what she wants. In most plays she’d be the antagonist, and her behavior would be punished. But Shaw seems impressed by her — he’d always sided with the world’s workers, and here he has a character who refuses to be bound by the circumstances of her class, and knows that leaving it is an act of war. In an actual drawing-room comedy, everything Louka does would be villainous. In Shaw, she’s heroic. She gets almost as much stage time as anybody, and it’s possible to see this play as realizing, at some point, that it made a mistake — the Bulgarian girl and her romance with the Swiss soldier isn’t the main story.

No, the main character is Louka, and, as it is, almost everything that happens in the play that drives it to its happy ending is Louka’s doing.

If I have a complaint about this Guthrie production, it’s not that it’s slight, but that I saw it opening night, when the play’s comedy seemed mannered and penciled in. I expect that this cast will continue to explore and expand on what they’re doing, and, by the end of the run, little moments of comedy that pass almost unnoticed will be elaborated into their own extended scenes of mayhem. The play has all sorts of these moments — Kate Eifrig, playing Nakasone’s mother, beseeching the Swiss soldier to stay while grimacing wildly and nodding her head in the direction of the exit, and Peter Michael Goetz, as Nakasone’s father, who responds to occasional bullying by his wife with an embarrassed laugh. There’s a lot of room for clowning in these moments. If I get the chance, I’ll go back toward the end of the run and see what the cast has done with these bits. 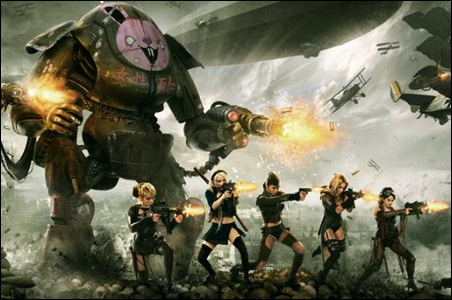 The radical proposition in ‘Sucker Punch’
There’s a movie out now where the main character quite literally realizes she’s not the main character at its end — that she’s been the supporting character in somebody else’s story, and the movie has made a terrible mistake in focusing on her for the entire time. This is quite a radical proposition for a film to make — it’s the sort of explosive moment of self-awareness that postmodern literature specializes in. Unfortunately, it occurs at the end of “Sucker Punch,” a film that genuinely is as slight as critics seem to think “Arms and the Man” is.

Director Zack Snyder is a superb film stylist, but this isn’t necessarily a compliment. He seems to have taken a camera and literally just flung it across a green screen, and then gone back and painted in whatever he thought might be cool: World War II flying aces battling dragons, as an example, or a girl in a Sailor Moon outfit battling brobdingnagian robot samurai. And there are real pleasures to be had in this sort of berserk genre mash-up. The film is obsessively, deliriously in search of its own muse, which aren’t any of the ones we know from ancient Greece, but instead a younger version raised on a steady diet of comic books, video games, anime, war movies and Pixy Stix. It isn’t Shakespeare’s tale of an idiot, but instead the tale of a hyperactive geek culture fanatic — but, as with Shakespeare’s storyteller, it is full of sound and fury and signifies nothing.

The biggest issue in the film is functionally a structural one, and, again, how postmodern. Snyder sets his tale inside an insane asylum, but then has his main character, a tiny blond girl modeled after Alice in Wonderland and played by Emily Browning, engage in an extraordinary act of psychodrama. She re-imagines the madhouse as a perverse burlesque theater, and it is in this fantasy world that she plots her escape, with each of her schemes pushing her into even more outrageous fantasies.

At the end of the film, we found out that much of what she did in the fantasy world also happened in the asylum — a stabbing, a fire, some thefts. But we don’t know how much of it was real and how much she made up, and it is pretty hard to invest in the film’s other characters, who may all be invented. This is especially a problem when Browning realizes that she’s a supporting character in one of their stories — as an audience member, we simply don’t know how much of the other character’s story is true, or even if she exists outside Browning’s imagination. Which I suppose might be another postmodern moment — the story acknowledging that it is a construct, and that any investment we have in a character is entirely based in how credible we find an acknowledged fiction.

But I find it very hard to believe that Zack Snyder created an $82 million criticism of the inherent artificiality of narrative. I think it’s more likely that he sort of lost control of his story, and postmodernism showed up completely by accident, like an uninvited guest at a mad tea party.