Quite a few years ago, there was a book by Rick Schmidt called “Feature Filmmaking at Used Car Prices.” It’s a good book, but, back when it came out, you could buy a used car for $400. Even if you shot an entire movie on 16mm film with a minimal lighting kit and unpaid talent, there was no way to produce a feature-length film for anything less than tens of thousands of dollars. Even “El Mariachi,” Robert Rodriguez’s debut film and one of the most famous microbudget films ever released, put him back $7,000. And that was to produce a videotaped copy, intended for the Mexican home-video market. Film was shot on film stock, and whatever you did to cut prices, this was an expense that you couldn’t get around.

But that was the past, and this is the future. Now that films can be shot, edited and distributed digitally, it’s possible to make a full-length feature film for almost nothing. For instance, there was a fellow in Wales, Marc Price, who made a feature-length zombie film for about $70, called “Colin.” And there’s an entire movement based around microbudget filmmaking, with its own genre name, and a rather hilarious one at that: They call it mumblecore. These films typically use actual locations, are semi-improvised, and use nonprofessional actors; the latter, presumably, tend to mumble a bit.

And how are they? I haven’t seen many, which I feel bad about, but they tend to get pretty good critical responses. 2002’s “Funny Ha Ha,” which is an early example of this type of filmmaking, was named one of the top films of the year by the New York Times. 2008’s “In Search of a Midnight Kiss” won an Independent Spirit Award, and both the Austin Chronicle and the Hollywood Reporter placed in on their best of list.

There’s a mumblecore film playing at St. Anthony Main just now, and it’s already high in the running for being on my best-of list. The film is called “Cold Weather,” by a filmmaker named Aaron Katz, who has two previous films under his belt, both costing about $2,000, which seems almost extravagant by mumblecore standards. This film cost even more — about $100,000 — and Katz is reportedly sick of getting grouped in with other mumblecore filmmakers. But one suspects, just as with punk rock and the world of hipsters, one of the marks of being part of that subculture is denying that you have anything to do with it. 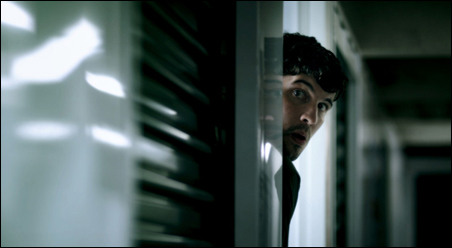 This film has all the earmarks of mumblecore. It’s cast mostly with unknowns — the star, Cris Lankenau, doesn’t have a Wikipedia page and only one previous film credit, which happens to be Katz’s last film. The whole of it is shot on location in Portland. The pacing is what we’ll charitably call languid. Much of the film seems improvised. And although the film is something of a mystery, the film doesn’t bother with the visual spectacle of suspense. There’s a daring theft that takes place off camera. And there are two car chases, but both involve one car driving away from somebody who is running down the street, and the runner gives up after about half a block.

Katz has rediscovered that film is capable of another sort of spectacle. If you place a camera in close proximity to somebody, it is a great recorder of small, intimate moments, and this film indulges those. It spends as much time watching Lankenau and actress Trieste Kelly Dunn, who plays his sister, looking at each other as it does establishing the film’s mystery. And the mystery is something of a McGuffin in the sense that Hitchcock used it — it really isn’t the point of the film, so I’ll get it out of the way quickly: Lankenau, a college dropout who studied forensic science, has moved back to his hometown of Portland and in with his sister, and he has found work packing ice in a factory. His ex-girlfriend comes to town for business and promptly disappears, and Lankenau tries to find her.

Lankenau is a Sherlock Holmes fan, and he has introduced one of his coworkers at the factory, a friendly Trekkie played by Raul Castillo, to the fictional detective. When the ex-girlfriend disappears, they take a stab at being Holmes. So they search the missing woman’s hotel room, and collect clues, and stakeout a suspect, and they do all of it with a sort of comical amateurism. They’re not inept, precisely — they actually do manage to figure out what’s been going on. But they aren’t exactly, er, ept, either. Their attempts to search the hotel room lead to repeated awkward interactions with the night manager, and Lankenau purchases a pipe in order to mimic Holmes, hoping it will help him think, and then promptly decides he doesn’t like it very much and stops smoking it.

But this is all a pretext for watching the way young adults interact. The film has a particular interest in Lankenau’s budding friendship with Castillo, which occurs in brief, teasing conversations when they can grab a spare moment at work, and Lankenau’s relationship with his sister. They have an evident affection for each other, but are estranged by his having been away at college, and they spend the film awkwardly trying to bond over things like impromptu picnics at the ocean and tossing grapes off a roof.

Eventually, it’s the mystery that causes them to spend more time together, and the film ends unexpectedly, on a moment of unforced affection between the two. It’s a genuinely lovely moment, understated and unresolved, and, as a result, startling. It’s also sort of perfect. The McGuffin has been resolved — it was never the main point of the film anyway, and filmmaker Katz doesn’t need to belabor it anymore. So he gives his cinematic siblings a moment together where they’re just being brother and sister, and then ends the film, because those are the moments that matter to him anyway.

The characters are all sort of lost in their first careers, or lack of them, and all a bit adrift, uncertain who they are or what they’re supposed to do with their life. The show mocks children’s programs like “Sesame Street,” because those programs promised us that we were special and could do anything, and we grew up to discover that life didn’t share that viewpoint, or give us the opportunities it promised. The show even includes former child actor Gary Coleman as a character, because, as the play’s creators point out, he was sort of the poster child for the disappointments of adulthood.

Mixed Blood theater has a production of “Avenue Q’ just now, and we’ll call it the mumblecore version — it’s quite a bit stripped down from the Broadway version, where each of the puppets costs as much as five films by Aaron Katz. But the show also benefits from being done on a smaller scale — Broadway excels at bombast, but fails at intimacy. “Avenue Q” was always a bit unusual in its use of a sort of theatrical doubling, in which the puppeteer dresses just like the puppet and stands next to it, and this leads to a sort of intimacy that is best communicated in a smaller venue. Director Jack Reuler has cast some very appealing actors in this production, and, while he has wisely brought in Michael Sommers to help with the puppeteering, resulting in very lively and engaging puppets, you can also watch the actors as they perform. 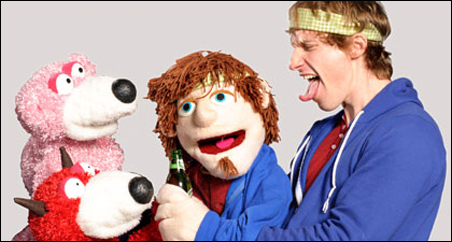 So there’s a faltering relationship between a college graduate named Princeton, played by Tom Reed, and a substitute teacher named Kate Monster, played by Bonni Allen. And it’s a pretty typical romance, filled with small uncertainties that lead to little betrayals that mount up to real heartbreaks. If you watch the puppets act it out, there’s a ridiculousness to it — it has a satiric quality, as though the play were using puppets to lampoon the missteps of young romance.

But if you watch Reed and Allen perform the role, they act it with genuine confusion and hurt, and there is no lampooning here. Instead, we have two actors representing one of those small stories of growing up that really smarts when it happens, when you wind up hurting, or being hurt by, somebody you care about for no reason other than you’re not experienced enough to avoid doing so.