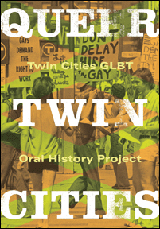 U of M Press

“Queer Twin Cities,” published by the University of Minnesota Press, starts with a complaint about the film “Milk,” about assassinated San Francisco Board of Supervisors member Harvey Milk. It seems like an odd thing to complain about, but there is a scene in the film in which the title character, played by Sean Penn, receives a phone call from a desperate, suicidal young man. He’s gay and lives in Minnesota, and he’s just hopeless. Milk advises him to do whatever he can to get away, to someplace like New York, or Los Angeles, or San Francisco, where there is a gay community that will support him.

Twin Citians never really like this advice in whatever form it takes, whether it’s visual artists who are told that if they are serious about their careers they should head to New York, or aspiring filmmakers who are told to head to Hollywood, or, I don’t know, people with magnificent beehive hairdos who are told they won’t really be appreciated outside of Baltimore. But Jennifer L. Pierce, who wrote the “Queer Twin Cities” intro, really takes umbrage with Milk’s cinematic advice. No Minnesotan needed to move to the coasts in the ’60s or ’70s to find a supportive LGBT community, she points out, as one already existed in the Twin Cities.

The book, a product of the Twin Cities GLBT Oral History Project, is the first I know of to try to really systematically document the local history of this specific community — a daunting task, as, thanks to social taboos and repressive criminals laws, it was a community that was necessarily clandestine for so much of its modern history. And so the book peeks in on logging camps during the late 1800s and Minneapolis’ skid row during the turn of the century and finds ample evidence of homosocial relationships: men or women living together in close quarters, often sharing beds. But there is scant documentary evidence of these people’s physical relationships, or their attitudes around the subject of same-sex physical relationships, but for one notorious example: William Williams’ murder of 16-year-old John Keller, with whom he had almost certainly been lovers, and Keller’s mother, who opposed Williams’ plan to move with the boy to Winnipeg.

But as we press forward into the 20th century, we find living witnesses to the history, and this is where the GLBT Oral History Project becomes especially valuable. For a while now, there has been only one tale from the 1940s: Ricardo J. Brown’s memoir of his experiences in a working-class gay bar in St. Paul called “The Evening Crowd at Kirmser’s,” also published by the University of Minnesota Press. But Brown had very little to do with any gay community outside of the one in his bar — he’s put off by drag shows and other showy expressions of gay identity, and contemptuously references another bar, the Viking Room, in Minneapolis, where “piss-elegant” gay men discuss Bette Davis movies. “Queer Twin Cities” points out that the Viking Room wasn’t exclusively a gay bar, but the gay male community benefited from a Minneapolis anti-prostitution ordinance that prevented women from going up to the bar. So it was men exclusively who gathered around the saloon’s octagonal bar, subtly cruising each other while surrounded by unaware straight men.

The GLBT Oral History Project didn’t locate many other Twin Cities gay bars from the ’40s, but for the gloriously named Persian Palms in Minneapolis, but the project did locate other former patrons of these bars — except the Persian Palms, which is a pity, because the place was rumored to have had a second bar in a room behind the main one that was intended primarily for gay clients, and the book’s authors located an ad for the establishment from 1949 in which the bar offered female impersonators performing in the “sensational ‘Gay Time’ revue.” They also located a photo, and, despite its exotic name, the bar seems to have been a workingman’s dive, the sort of place that is filled with sailors and where people throw the shells of bar peanuts on the floor.

The books also points out that these bars were pretty much exclusively white, and takes great effort to address the LGBT history to be found in Twin Cities communities of color. A chapter entitled “The Myth of the Great White North” offers a roundtable discussion of the topic, which is tricky — the discussion begins by acknowledging that much of the way we discuss the subject of homosexuality has been defined by white activists and overlooked experiences outside their own. For instance, one of the participants, Brandon Lacy Capos, points out that in Latin-American communities, there are a lot of men who have sexual relationships with other men, but don’t identify themselves as queer.

The best documented periods in the books are, necessarily, from the 1950s on, when the Twin Cities communities became increasing visible, and then increasingly activist. In the early 1960s, it was suddenly possible for a transgender man to move to Minneapolis from rural Minnesota, purchase a magazine called “Transvestia” at a downtown bookstore, and, via personal ads in the back of the magazine, befriend others from around the Midwest with similar self-identification, and join them for regular regional meetings. Post-Stonewall, gay and lesbian activist and support groups exploded in the Twin Cities, including at least two bookstores, Amazon and A Brother’s Touch.

I remember A Brother’s Touch. When I was a young man, it was located on Hennepin Avenue, midway between downtown and Uptown, right across from Temple Israel, where I went to Hebrew school. I was a bookish boy and tended to haunt bookstores, and so often wandered over to A Brother’s Touch, somewhat unclear on what sort of bookstore it was. I remember leafing through a book that detailed the hankie code that some men affected to signal their sexual preferences, and being startled by it — it was my first exposure to the fact that there were so many kinks, and that people had so formalized their kinkiness.

I tended to steer clear of the most blatantly homoerotic material, of which there wasn’t much, anyway, and it was kept away from errant Hebrew school kids who might wander in, anyway, but the store had an extraordinary selection of transgressive literature, from De Sade to Jean Genet to hardboiled crime writers from the 1940s, which fascinated me, and so the bookstore became one of my regular haunts.

Nobody ever said anything about this. And so I think Jennifer L. Pierce is right to complain about “Milk.” When a straight Hebrew school student in Minneapolis can accidentally become a patron of a gay bookstore in the 1970s, there’s really no need for anybody to move to San Francisco. 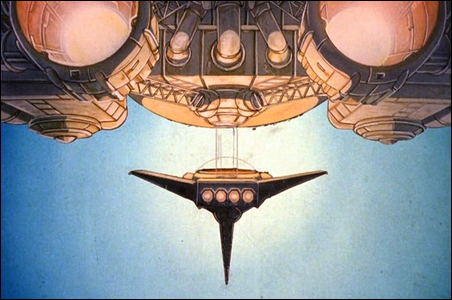 There’s an odd film playing at the Trylon Microcinema tonight, and, if you’re the sort of person who likes this sort of film, well, here’s your chance. If you were part of a specific subculture during the ‘70s — not the LGBT subculture, although I suspect there was some overlap — you probably saw a psychedelic animated science-fiction film by René Laloux called “Fantastic Planet.” Laloux followed this up in the early ’80s with a movie called “Time Masters,” which is similarly trippy, albeit with character animation that was primitive enough to resemble, say, “ThunderCats” or “GI Joe.”

The story tells of a very young boy stranded on a hostile planet filled with giant killer hornets. A rescue mission heads out, but will take at least a month to reach him, and so the mission faces dual challenges: Firstly, they must keep the boy alive for a month, and, secondly, the voyage is a very weird one, interrupted by a planet with a personality annihilating intellect, and space pirates, and, at the climax, a species of aliens that interrupts the narrative, throwing part of it 40 years into the past. In the meanwhile, childlike alien blobs observe humanity psychically and offer philosophical speculations on how strange we are.

The film’s look was designed by a French artists named Jean Henri Gaston Giraud, better known by his pseudonym Moebius — he co-created the influential magazine “Métal Hurlant,” which in the United States became “Heavy Metal.” In this way, not only was he responsible for much of the fantasy and science-fiction-themed cartooning of the ’70s and ’80s, but his own cartoons inspired the look of “Blade Runner,” and he himself was hired to create designs for “Alien” and “Tron.” He has a very distinctive style — it’s busily mechanical, but also borrows from art deco, featuring clean lines and elegant Egyptian motifs. It’s instantly recognizable, at least in part because it so thoroughly influenced the way science fiction looks that we have all been looking at Moebius’ work for 40 years without knowing it.