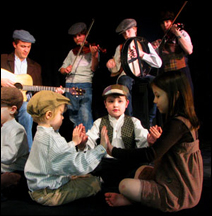 This past Sunday, the Irish Music and Dance Association had its annual Irish Day of Dance at the Landmark Center in St. Paul. Irish dance has enjoyed a terrific revival in the past few years, I suspect thanks, in part, to the phenomenon of Michael Flatley, the Chicago-born step dancer behind such Irish dancestravaganzas as Riverdance, Lord of the Dance, and Feet of Flames.

The main event took place in the towering atrium of the Landmark Center, and consisted of students from various area dance schools offering up showcases of their work. Now, there are actually quite a few forms of Irish dance, including a variety of festive social dances borrowed from the French; there was an opportunity to participate in this upstairs. But the main floor was given over to step dancing, a dance characterized by an unusually stiff upper body and percussive, nimble, leaping leg movements. Sometimes hard shoes are worn, creating an effect that is famously explosive.

Step dancers are mostly girls, some very young, although there will be an occasional boy in the mix, bouncing around like a gazelle. The costumes are elaborate — only figure skaters, Vegas showgirls, and, one supposes, Liberace, offered more of an assortment of sequins, embroidery, and dazzling reflective colors. Female dancers also, to the girl, wore curled wigs, or carefully curled their hair into tight ringlets. Step dancing is a competition dance style, and, as with figure skating and Liberace concerts, part of the final judgment is based on how the performer chose to dress. Best still, Irish dancers often also have the pleasing habit of screaming in delight at each others’ dances, like young women in the ’60s did at Beatles concerts.

This is one of those occasions where it doesn’t do just to describe something, and so I have made a short video from the day. Live music was also offered at the Landmark Center, and so the video starts with a sample of traditional Irish singing, in the Irish language, from a member of the Traditional Singers Club. This is performed sean-nós — literally, “in the old style,” an ornamental and traditionally unaccompanied style of singing that is nasal and pitched very high, at the top of a performer’s natural singing voice, and is sometimes as ghostly as a selkie mourning at sea and sometimes as licentious as the bleating of a goat. While the step dancing was performed to prerecorded accompaniment, there was additional live music taking place at the Landmark, and so I have put the dancing to a song by an adult ensemble from the Center for Irish Music.

The Irish Day of Dance also offered up samplings of Irish theatrical performances, including a scene or two from the current offering by the Steppingstone Theatre, which, in their words, is a “professional theatre for young actors” in St. Paul. They’re running a show just now called “Get Up Your Irish,” from an idiom about the Irish temper that I have only ever heard as “getting your Irish up.” This new phrasing of the idiom has the advantage of not ending with a preposition, but the disadvantage of sounding like one of those rude ’70s British comedies made at Pinewood Studios and starring Kenneth Williams and Joan Sims.

There is a risk in reviewing children’s theater of sounding a bit like Thaddeus Bristol, David Sedaris’ theater critic who offers up John Simon-like eviscerations of children’s Christmas pageants. I won’t be doing that, in part because it would be mad, but mostly because I rather liked the show. The play, created by Norah Rendell and Natalie O’Shea, tells of a family of Irish immigrants in St. Paul sometime around the turn of the 20th century. As is usually the case in children’s theater, the script lacks subtext — people say pretty much exactly what they mean — and metaphor. This is not a complaint, as quite a few things I like lack subtext and metaphor — including minimalist art and my own plays. Additionally, the play has the winning habit of stopping every few minutes for a song, often accompanied by dancing. Everything should stop every few minutes for singing and dancing, as Liberace knew only too well.

The tale tells of the Murphys, who have been in the United States for however long it took for them to lose the family’s mother and eldest brother — given the dire state of transportation at the height of the Irish migration, this could have happened on the boat ride over. The father struggles to find work, while his son and daughter struggle to make a home for themselves. This is expressed most keenly in the older brother, Patrick, who refuses to be called by his Irish name, Padraic, but will launch into extraordinary demonstrations of step dancing the moment he hears music. He is played by Evan Lowe as a sullen, bookish boy; Lowe is also an award-winning dancer who has competed in Dublin, and when you’ve got somebody like that on hand, you make as much use of it as you can, and so he spends half of the play performing jigs, or reels, or hornpipes.

He’s bullied, as is everybody, by a pair of brothers named Reagan, who wear matching patchwork vests and newsboy hats, and who like to brag about how well their father is doing. They’ve embraced assimilation with a vengeance, policing other Irish children and mocking them if they speak Irish, or exhibit any residue of the old country. For some reason, they hang out with a kid from Swede Hollow whose dialogue consists entirely of “Yah sures” and “You betchas”; they only seem to be bothered by unassimilated Irish. One imagines life to be especially irritating for the Regans: Not only is there the Murphy boy, who just needs to hear a single note from a penny whistle and he starts bounding around the set like a dervish, but pretty much the entire cast will burst into traditional Irish song when given half a chance, and, when they’re not making any noise, a group of Irish musicians off to the side will take up the slack and start singing. Additionally, about a third of the play’s dialogue is in Irish, although in the way that foreign speakers communicate in plays, speaking in their native dialect and then immediately translating. “Conas atá tú?” somebody will call out, and then immediately follow it with “How are you?”

Although the play does an admirable job wedging an awful lot of history into its family melodrama, what is succeeds at most is showing just how hardy culture can be — and, to some extent, it does that accidentally. Here we are, more than a century after the events of the tale occurred, and the theater has had no difficulty in locating a group of children and a smattering of adults who can step dance, and play Irish fiddle, and penny whistle, and sing and speak in Irish. Admittedly, some of this was certainly taught for the show, but not all of it — there’s only so much you can pick up during a rehearsal period, and these performers demonstrate a nimbleness with much of what they attempted that evidenced previous training.

The most telling moment in the play comes at its climactic dance number. The show has a few very small children in it — you could fit them in your shirt pocket. And, in the way children often are, at the performance I as at they seemed vaguely unaware that they were onstage, but were just caught up in whatever was happening right in front of them, which was step dancing. And, in the way children do, they danced along, kicking and bouncing with great enthusiasm and no training. This is how Irish culture has maintained itself in the diaspora. You show 50 children a step dance, you’ve created at least 45 new step dancers.

High stepping: The Irish Day of Dance and Steppingstone’s ‘Get Up Your Irish’