l have been meaning to meet Susan Marks for quite a white now. You should always make it a habit to meet interesting people, and Marks does all sorts of interesting things. She is responsible for a documentary called “Of Dolls and Murder,” detailing how forensic researchers in Baltimore in the 1930s used a series of doll houses to study murder scenes; Marks was crafty or lucky enough to get John Waters as the narrator for this film.

And now she’s written a book about underwear. Specifically, Munsingwear, a Minnesota-based company. I haven’t read the book yet, but plan to soon, and there will be several events related to the book coming up, which I plan to attend. So think of this as the first of several Susan Marks-related posts. For now, I’ll just discuss the event she was at last night. It was part of the Minnesota History Museum’s “History of Hip” lecture series, this one titled “Minnesota Naughty.”

So Marks discussed Munsingwear. More to the point, she discussed Munsingwear’s ad campaigns, which tended, for whatever reason, to be a little more out there than other underwear manufacturers. Back when the subject of unmentionables was, well, unmentionable, other companies relied on discreet illustrations or photographs of women shopping for underwear. Munsingwear offered up photographs of actual humans in actual undergarments, although, at the start, posed for modesty.

Further, if they were too clever, they carefully targeted a gay clientele. If they were too naive, they were naive to a startling extent. Starting in the 1930s, they began a series of ads based around male bonding, but the men were always somewhat unclad. The first showed a rather athletic man in his undergarments showing a new tennis racket to an appreciative friend, and here Marks quoted a friend of hers, who gave voice to the underwear-clad man in the ad. “It’s like he said to his friend: Come over and look at my new racket. But I can’t promise whether I’ll be dressed or not.”

As Munsingwear got into the 1940s, their ads became even more outre: They had a series in which two undressed men stood in front of a single, unkempt bed and mocked each other’s underwear choice. “A surveyer, eh!” one cries out. “Well survey this!”

“Boy, somebody should stuff you!” another shouts out to a friend with a mounted fish. The oddest one has one man teasing another by saying,, “It’s old flappy pants pappy himself!” Oh, near-naked men and your underwear bonding rituals, you’re always a delight!

This is not to say women were left out. Munsingwear also had a series of ads featuring two women, perhaps roommates, one unclad, the other looking on appreciatively. Marks showed one in which the undergarment-wearing woman posed in a mortar board while the other said, “If the dean could see you now!” What then, sexually ambiguous roommate? What would the dean think?

Marks was one of two presenters at “Minnesota Naughty,” and the other was a woman whom I now must add to my list of people I must meet; it’s always such a pleasure to discover there are interesting people you don’t know. Her name is Sarahjane Blum-Murphy, and she owns a gallery called Grapefruit Moon, which I presume is named after a Tom Waits song and specializes in pin-up art. 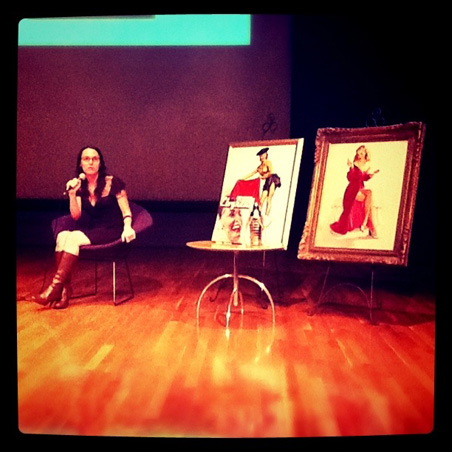 Blum-Murphy was on hand to discuss an artist named Gil Elvgren, who was among the most famous pin-up illustrators after World War II, so much so that one of his paintings was featured in a Norman Rockwell painting in which a cheerful old man hangs up a girly calendar while his wife looks on disapprovingly. And, as Blum-Murphy points out, there are several local connections here, and not just in that Elvgren was Minnesota-based. Two of the companies that produced pin-up calendars, the Louis F. Dow Calendar Company and Brown & Bigelow, were local. “Pin-up is a local industry,” Blum-Murphy told her audience, and the proceeded to show a series of paintings by Elvgren, which drew appreciative wolf whistles.

Elvgren liked to paint images of women who were active, good-natured, and, as Blum-Murphy points out, “a little bit clumsy.” So their activities tended to have them accidentally reveal some of their underwear. “We look at these now and think, oh my god, are they innocent,” Blum-Muphy said. “I guarantee you, in the ’50s, people were looking at these and saying, oh my god, are they innocent.” But there’s great charm to their casual, accidental, faux-naivete; everybody looks like they are having fun, and the women in the paintings don’t seem to care one way or another if somebody sees their underthings. “It was the easiest job I ever had,” one model said, according to Blum-Murphy. “I just lifted up my skirt and said ooh.”

While we’re on the subject of naughty, here’s another tale, although one that’s not based in Minnesota. A month ago I discovered there is a new rum called Ron de Jeremy, so of course I immediately requested a bottle for review. (The manufacturers are selling the first numbered limited-edition series of the rum exclusively over the Internet through their website.)

And now I must make one of the odder full-disclosure confessions I have ever made, because I have some professional experience with Ron Jeremy. Back in the 1990s, I cowrote an adult film called “Timeless,” which was a rather awful lampoon of Charles Dickens’ “A Christmas Carol.” Because the film’s story involved an adult actress being brought through time to witness scenes from the past of adult filmmaking, a number of porn legends were assembled for cameos, and so Ron Jeremy was given the Jacob Marley role, wandering the earth in chains representing his greed. Jeremy improvised a lot of his dialogue, considerably improving the dreck that I had written. I had given him an ignoble death, dying on the set of an adult parody of “The Towering Inferno,” and, when he described his death, he ad libbed. “A spark from the set set my back hair on fire,” he said. “I went up like a menorah.” For those of you considering tracking down this cinematic masterpiece, I can’t recommend it, but one does feel a certain perverse pride in having a tale like this in one’s past. 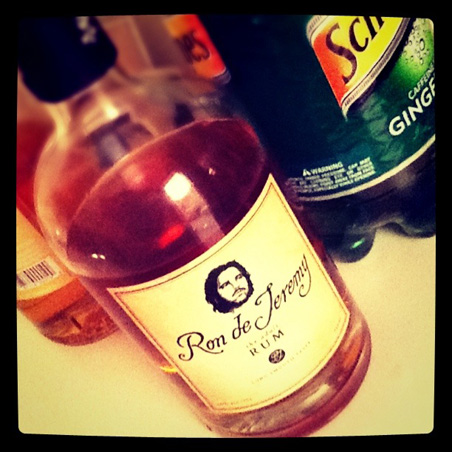 But how is the rum? Well, it promotes itself as a top-shelf brand, the sort of rum that people nowadays call a “sipping rum,” like Pyrat or El Dorado. These are the rums that are usually blended, in the way you blend whiskey, to make a drink that is smooth, mellow, and complex enough to justify drinking straight, perhaps with some lime. The oldest of the blended rums in Ron de Jeremy is 7 years old, and the drink is Panamanian and, according to their promotional material, blended by a 72-year-old Cuban master blender, which all demonstrates a degree of care that’s a bit surprising for a rum that seems gimmicky. But, then, comedian Dan Ackroyd is responsible for a vodka in a glass skull, reflecting his esoteric occult interests, and the vodka itself is superb. I am starting to wonder if Billy Beer might have been delicious.

I am not sure I would recommend Ron de Jeremy as a sipping rum. Although it has an aged flavor, I found it a bit sharp when drunk straight, although I didn’t add lime and that might help. As a mixer, however, I thought it was quite good, with a hint of cherry to the flavor. I could probably make a joke at this moment, but I am guessing you already have, and it was better than mine.