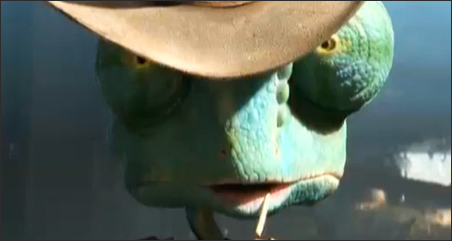 Courtesy of Paramount
Johnny Depp voices a chameleon in “Rango.”

In the ’60s, as with a lot of arts, the western took a turn for the weird. The genre went down one particular rabbit hole that it never really has again, until this past weekend, that is. Somehow the counterculture got hold of the humble oater, and suddenly everything went mad.

This was the acid western. There weren’t that many of them, and they aren’t screened much anymore. There was “El Topo,” Alejandro Jodorowsky’s grotesque, visionary and frequently incomprehensible gunfighter parable. There was Dennis Hopper’s “The Last Movie,” in which Indians in Peru develop a sort of cargo cult of western filmmaking, where the cameras are pretend but the violence is real. There were a series of films scripted by experimental novelist Rudy Wurlitzer, including “Pat Garrett and Billy the Kid,” a cyncial retelling of a classic western story with a soundtrack by Bob Dylan. There was “Greaser’s Palace,” by Robert Downey, Sr., which revisited the Gospels with a zoot-suited Christ figure in a deranged frontier town. And there was “Django,” a spaghetti western in which a gunfighter drags his own coffin from town to town, loaded with a Gatling gun.

There were more, and you can search them out, if you like. They’re excessive, in the way a lot of ’60s and ’70s countercultural films are excessive, and they’re often portentous, in the way much of the work created by the drug culture can be. But they’re generally genuinely weird, and, if this sort of weirdness is to your tastes, the Wild West really didn’t get any wilder.

Or you could just go see “Rango,” the animated film by “Pirates of the Caribbean” director Gore Verbinski, which opened this past weekend. Perhaps because it’s ostensibly a children’s film, the movie managed to do something that acid westerns have typically failed to do in the past. It found a mass audience.

But make no mistake, it’s an acid western all right. First, there is the animation style, which is both hyperrealistic and grotesque — the film is populated with desert animals, and most have frightening dentia and filthy fur and inhuman eyes, and then they are caricatured slightly, so their bodies are crooked in unexpected places. They live in a desert of baking heat, so everything sort of shimmers all the time, making it all look like some ghastly, glorious mirage. The film starts and ends with a mariachi group made up of owls that sing of the death of the hero, an iguana voiced by Johnny Depp as a gloss on one of his earlier characters, notorious b-filmmaker Ed Wood. But while Wood made dreadful films, Rango, the iguana, merely inhabits unlikely fantasies of heroism, which he then critiques. He’s thrust into the reality of heroism when he is thrown from the back of a car into the desert in a scene that signals what we’re about to see: At one point, he lands on the windshield of Hunter S. Thompson, driving through the desert in a convertible with Dr. Gonzo.

The plot of the film itself is rather plain, telling of a town with no water and the town leaders that benefit from it. Critics have pointed out how similar this plot is to that of “Chinatown,” which in turn was based on the actual California water wars of the ’20s and ’30s, in which Los Angeles bled the nearby Owens Valley dry of water, ruining the agricultural settlement that had been there since the mid 1800s. Depp’s chameleon becomes the defender of the ranchers in this version, blustering his way into a role as sheriff, which he tackles with great gusto and no actual skill.

What follows is a mixture of slapstick and epic set pieces, such as a ride through a canyon pursued by a family of desperadoes. All this might be rather by-the-books for a western, but, then, the desperadoes are moles, and they ride bats. And they play “Ride of the Valkyries” on jug band instruments as they do so. One suspects Jodorowsky would be delighted.

“Take Me Home Tonight,” a comedy starring, cowritten, and produced by Topher Grace from “That ‘70s Show,” likewise borrows from an earlier genre — he has set his romantic comedy in the ’80s and styled it after John Hughes movies, such as “Sixteen Candles” and “Pretty in Pink.” And the film has its own drug influence, in the form of cocaine, which is used enough in the movie  to cause its studio to panic and shelve it for five years.

The film has what is essentialy a good plot, following two high-school chums as they try to figure out their lives four years or so after high school has ended. There is Toper Grace, who hasn’t done anything and is afraid to try, and there is Dan Fogler, who skipped college for a failed career as a car salesman. Both take advantage of one wild night at two wild parties to investigate what they might have become had they made different decisions. Grace passes himself off as a successful banker, mostly to impress the girl he had a crush on in high school, while Fogler tries life as a party animal — thus the cocaine.

Neither of the parties are quite as wild as they should be. John Hughes had a taste for total chaos, and the most ordinary get-together would leave a house destroyed at the end of the evening (“Sixteen Candles” includes a long scene of heartthrob Michael Schoeffling walking through his parents’ house, post party, and it seems to be nothing but piles of beer bottles and empty pizza boxes). Grace’s film never manages that, especially at the second party, a soiree in Beverly Hills that is intended to be a vision of ’80s decadence. But the most it offers is some kinky sex in a bathroom, which so badly frightens Fogler’s character that he flees.

Ultimately, there was no real reason to set this film in the ’80s. Unlike the acid western, there are still John Hughes-style films made all the time, including “Hot Tub Time Machine” and “Adventureland,” both released in the past two years and both set in the ’80s, with the former capturing Hughes’ sense of chaos in a way that “Take Me Home Tonight” doesn’t, and the latter capturing Hughes’ genuine compassion and concern for his characters that “Take Me Home Tonight” strives for, but never really achieves.

Out of the past: ‘Rango’ and ‘Take Me Home Tonight’