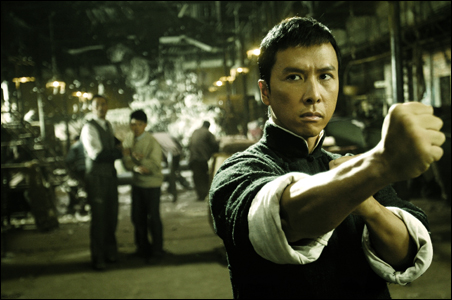 There’s a martial-arts film playing at St. Anthony Main, and it’s pretty irresistible, despite the fact that it turns into “Rocky III” in its third act. The film is called “Ip Man 2,” and is the second in a proposed trilogy inspired by — but only very loosely — the life of an instructor in the Wing Chun school of kung fu.

This is a style of kung fu I have some familiarity with, believe it or not. Years ago, I intervened in a rather brutal beating near St. Anthony Main. The attacker was a man, the attackee a woman, and, as far as I could tell, he had struck her several times with a hammer. Once I intervened, he turned the hammer on me, and we struggled for perhaps five minutes, with me clutching his hand to keep him from connecting with the hammer. Briefly, and stupidly, I attempted to knock him out, striking him repeatedly on the forehead with my fist, but that didn’t seem to do much more than amuse him. After a while, I somehow talked him down, and a few days later I enrolled in a local school of Wing Chun. I did not ever wish to be in a similar circumstance and be so ineffective.

I stuck with it for perhaps six months, and have re-enrolled since, and none of it is enough for me to feel that I have more than a passing familiarity with the program, although I have considerable more confidence in my ability to throw a punch. Mostly, I recall being paired with a very slender teenage boy whose arms were as small as twigs, but who had been with the program for years. We would punch at each other, over and over, glancing forearms, and his arms were like steel bars. After every session, my forearms would turn alarming shades of violet and purple, which I proudly showed to my shocked friends, referring to the marks as my kung fruises.

I took Wing Chun for what I suspect is the reason everybody does. Because it is the style of kung fu the movie star Bruce Lee trained in. And Ip Man (often also known as Yip Man) was his instructor.

He’s played here, as he was in the first film, by Donnie Yen, an actor who has carved out quite a career for himself in action films despite resembling an amiable chemistry professor. I have not seen the first Ip Man film. As I understand it, it was set during the Japanese invasion of 1937, and is pretty jingoistic. Perhaps this is a nod to one of Bruce Lee’s films, “Fist of Fury,” which is mostly about Bruce Lee beating up Japanese Bushido students. “Ip Man 2” at first follows the title character’s attempts to build a kung fu school in Hong Kong, and just as the genius of musicals is in how cleverly they build their stories around showstopping song and dance numbers, the genius of martial-arts movies is in how cleverly they build their stories around showstopping kung fu set pieces.

So Ip Man must fight the young people who come into his studio, just to show them that Wing Chun is a valid martial art. And then his students get into fights with students from other schools, and Ip Man must come to their rescue, which involves more fighting. And then, as it turns out, to open a school in Hong Kong, you must be willing to take challenges from any other school’s master, and so Ip Man must battle a series of bored looking elderly men who suddenly demonstrate extraordinary physical abilities.

And it’s all terrific. The fight choreography is by Sammo Hung, who also appears in the film. Although he occasionally indulges in superheroic whimsy, with characters performing impossible leaps and generally defying physics, for the most part he is fairly restrained. He takes great care to preserve and showcase the distinctive qualities of Wing Chun kung fu, which is done very close and very fast, with moves that simultaneously defend and attack. And then, in the third act, the film introduces the British.

“Ip Man 2” sees British colonial rule in Hong Kong as having been thoroughly corrupt, made up of petty officials who set themselves up as tin pot tyrants and expressed nothing but contempt for the native population. And so a local police official, when he’s not taking bribes, sets up exhibitions of western boxing, skimming all the profits. He brings in a boxer named Taylor “The Twister” Milos, played by an actor named Darren Shahlavi, who seems to be made of nothing but muscle and seething testosterone. In the middle of a kung fu demonstration, The Twister rushes the students, knocking several unconscious and heaping scorn on Chinese martial arts. This challenge must be met, and is, twice — the first with Sammo Hung, which ends in tragedy, and the second with Ip Man. And here’s where it starts seeming like the “Rocky” movie where the Italian Stallion had to fight an enormous Russian.

As certain as the outcome of this fight is, narratively speaking, the filmmakers do a great job of making it uncertain. Donnie Yen’s Ip Man, while being a superlative martial artist, is a kindly and thoughtful middle-aged man, and he’s a bit on the wee side; even his wife towers above him. He’s positively dwarfed by The Twister, who possesses a roundhouse that can kill a man. Worse still, The Twister has long arms that are as thick as telephone poles, and he uses them expertly — it’s virtually impossible for Ip Man to get close to him, which is pivotal in Wing Chun. And, over the course of the fight, the judges take away some of the tools that make his form of kung fu effective, such as the ability to kick an opponent. The resulting fight is brutal. I’m pretty sure it never actually happened, but, then, Rocky never actually fought Drago, and that film made $125 million dollars. Sometimes you just want to see a good fight. 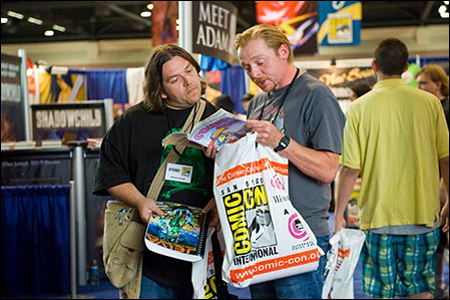 I’m going to take three paragraphs to talk about “Paul,” the latest film starring Simon Pegg and Nick Frost, a British comedy team who have had great luck mining their decidedly nerdly obsessions for film ideas. They were responsible for the superlative “Shaun of the Dead,” which both satirized zombie films and was quite a good zombie film in and of itself. They followed this up with “Hot Fuzz,” which sent up action films, but also was a rather good example of a peculiar British genre of horror film in which a small, occult cabal runs a small town. “Paul” is their sendup of science-fiction films, especially Steven Spielberg’s films about first contact with aliens. And it’s a rather funny sendup of, say, “Close Encounters of the Third Kind” and “E.T.”

It’s extremely genial, so it has that going for it. Pegg and Frost play two likable English science-fiction fans who take a tour of American UFO hotspots, only to be hijacked by an actual alien, a perpetually stoned smartass named Paul, voiced by Seth Rogan. They’re chased by shadowy government types and have a series of adventures, often experiencing a who’s who of American comedy, including Bill Hader, Jason Bateman, Kristen Wiig, Jane Lynch and Jeffrey Tambor. They all have great fun with each other, and it mostly translates to a fun film. But it never seems to dig very deep, staying satisfied with being amiable and vaguely fun.

This week in genre filmmaking: ‘Ip Man 2’ and ‘Paul’