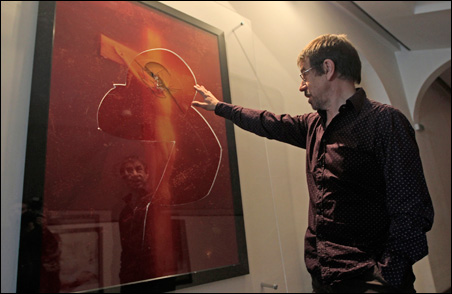 On Sunday, in Avignon, France, a group of men, all wearing sunglasses, entered a gallery, menaced a guard there and set about with a hammer and screwdriver to destroy two pieces of art on display.

Both were photographs by American artist Andres Serrano. The first, “The Church (Sister Jeanne-Myriam),” showed a nun at prayer. The second was one of the most notorious photographs of the 20th century, called “Piss Christ.”

“Piss Christ” was released in an edition of 10, so all the protesters managed to do was reduce the number of copies by a 10th — they very literally decimated “Piss Christ.” But the piece has aways been a locus for outrage, and while Sunday’s incident was dramatic, it’s hardly surprising. New York Sen. Alphonse D’Amato once tore up a copy of the photo on the floor of the U.S. Senate, protesting the fact that Serrano had received a National Endowment for the Arts grant. The image has suffered repeated attempts to ban it from being shown, echoing David Wojnarowicz’s video “A Fire in My Belly,” which showed a few seconds of ants swarming over a crucifix. The video was removed from an exhibition this past year after complaints, including some from House Speaker John Boehner that explicitly threatened Smithsonian funding.

What is it about “Piss Christ” that attracted such outrage? The image itself is evocative but ambiguous — a crucifix is seen suspended in amber liquid, overlit to the point that the representation of Jesus on the cross seems to glow, while small bubbles swirl about it. The title of the piece makes it clear what it is that the crucifix is submerged in, and Serrano has stated it was his own urine.

This  sort of image seems inherently provocative, and is, although there is a disconnect between the provocation and the outrage. Protesters have assumed the work was intended as sacrilege — the men who destroyed the photographs on Sunday were almost certainly responding to a call from groups such as the far-right Respect of the French and Christian Identity group, claiming the image is an affront to Christians. But is it? Certainly urine, as body fluids, is associated with contempt in most Western countries. An image widely appropriated by popular culture is that of Bill Watterson’s cartoon character Calvin urinating on something — often the logo of a car manufacturer or a competing baseball team — and this is not intended to convey respect.

No, the presence of bodily waste implies a lack or respect, no matter how unexpected or carefully used it may be, as with the portrait of the Virgin Mary created by British artist Chris Ofili, which incorporated elephant dung. Ofili and his work explores his Nigerian heritage by using materials native to his country. I have seen this image and, were you not instructed as to the presence of the dung, you would not know it to be there — and it’s interesting that people who were offended by the dung failed to notice that the image incorporates explicit images of female genitalia cut from pornographic magazines, probably because they are so cleverly incorporated into the final image that they merely seem to be a chorus of cherubim. No, it was the dung that caused outrage, including then-Mayor Rudy Guliani’s threats to cut off funding for the Brooklyn Museum of Art and a protester smearing white paint on the image in a failed attempt to destroy it, echoing reactions to the Serrano photograph, prompting irritated guards at the Brooklyn Museum to offer this defense of the image: “It’s not the Virgin Mary. It’s a painting.”

But, as with Serrano’s photograph, there was a presumption of blasphemy. I mentioned earlier that there was a disconnect between the aesthetic exploration by Serrano and the reaction of the protesters, and let me explain. Serrano produced a series of images in the ’80s and ’90s of images submerged in bodily fluids, often intended as an exploration of the contrast between items that are seen as being intrinsically beautiful or sacred and fluids that are seen as being intrinsically vulgar. The results are surprising, as Serrano’s images don’t show the objects soiled by this contact with the vulgar, but beautified by them — they take on an unearthly radiance and, because the fluids conceal all but the general features of whatever is submerged, a sense of extraordinary mystery. Without knowing what fluids we are dealing with, Serrano’s photographs are, objectively, gorgeous.

It is only the presumption that these fluids represent some universally understood expression of contempt that causes the images to seem sacrilegious, but, then, the image of Jesus is already heavily associated with bodily fluids; further. Mel Gibson’s “The Passion of the Christ” has Jesus drenched in blood, a grotesque spectacle of gore that is far from beautiful. But Gibson wasn’t accused of sacrilege — indeed, his Jesus was very much in the tradition of emaciated, agonized, fluid-stained representations of Christ that date back at least as far as Medieval times. Further, the story of Jesus is very much one of the sacred reaching out to the profane, and beautifying it, and being beautified by it; Serrano’s photograph abstracts this, reducing it to an icon and some fluid, but it’s not surprising that he has been championed by some religious figures. Writer Sister Wendy Beckett, a member of the Sisters of Notre Dame de Namur and a respected art critic, told Bill Moyers that she does not see the piece as blasphemous.

Serrano himself has responded to complaints with an aesthetic argument — that he was raised Roman Catholic and has an aesthetic attraction to the icons of the Church and feels, because he is a Christian, that he has as much right to make use of those images as anybody. “The best place for ‘Piss Christ’ is in a church,” Serrano told High Performance magazine in 1991, adding, “I think that I make icons worthy of the Church.”

It’s also worth noting that reactions to this sort of art are rarely merely aesthetic, or exclusively rooted in concern about blasphemy. They’re generally intertwined with politics, and, in the United States specifically, outrage over the images are generally fanned by right-wing politicians. In each of the cases I have mentioned — D’Amato tearing up “Piss Christ,” Guliani threatening to cut funding at the Brooklyn Museum of Art in response to Ofili’s portrait of the Madonna, and Boehner’s threat to defund the Smithsonian if “A Fire in My Belly” were not removed — the pretext was economic. All three claimed the outrage was primarily that tax dollars had been used to support blasphemy, although, in the case of Boehner’s protest, this wasn’t true. And while it’s unlikely that these politicians created the outrage — some people will legitimately be outraged by religious-themed art that strikes them as disrespectful — they fanned the outrage to score political points.

But this is a risky combination. It’s one thing for people to feel outrage over art — art is often outrageous, and some of us like it that way. But once an official sanctions that outrage, it tacitly legitimizes the most visceral, reactionary response to art, which is to vandalize it.

It’s a bit of a disappointing response. If you care about art, you don’t generally want to see it destroyed, and we patrons of the art labor under the misapprehension that challenging art fosters discussion. And it does, to an extent, but those discussion are rarefied, and don’t generally make their way down to the general public, and certainly not to the people who are outraged by art, for whom the discussion is often whether a hammer, a screwdriver, or white paint is the best solution for the problem of art.

But, then, there is always the risk that art will disappear into its own navel, turning into something only investigated and appreciated by connoisseurs who know the insider language of contemporary art, which likewise often runs the risk of becoming so cloistered and self-contained that it ceases to comment on, or affect, anything but itself. When men in sunglasses show up at your door with hammers in their hands, you know art is still reaching, and affecting, the larger public, even if that effect isn’t precisely what you would hope for.

Men with hammers and screwdrivers: On the destruction of Serrano’s notorious photograph