It’s hard not to get a kick out of the apocalypse. I don’t mean the real apocalypse, whatever that may be. I hold out little hope that I will be the John Cusack of however the world ends, steering limousines and aircraft away from cities as they collapse into the earth. No, I’ll probably be one of those background figures who you see for an instant, tumbling through the air. You’ll know which one is me — I’ll be snapping photos with my iPad on my way down.

No, the apocalypse that is kicky is not the one we experience, but witness. There were ancient Christians who believed that among the joys of heaven was the experience of peeking in on hell and taking pleasure from the suffering of the damned, and I think this is still with us. It doesn’t just explain the “Left Behind” series, which is a near-literal take on this ancient Christian belief. It explains disaster films, and, unfortunately, to an extent it explains actual disaster footage. Sometimes the news makes up complicit in leering at the agony of others. No, if we’re to take some sort of perverse pleasure from calamity, let it be fictional, or at least fictionalized. Yes, there was an actual Titanic; yes, we can still thrill at the guy who tumbles from the ship at the very end, only to get beaned by the propeller on the way down.

There’s a magnificent apocalypse taking place at Soo Visual Arts on Lyndale, which goes by the nickname SooVac, which sounds like a 1950s cleaning device. It’s a series of painting by Michigan painter Robert McCann called “You Had Me At Goodbye.”

I’m going to take an unusual tack here in discussing the show. Usually I would select one or two representative paintings and discuss them, but, in this instance, I am simply going to pretend that all of the eight or nine images in the show are actually just one enormous image, wrapping around you like a panoramic view of the end of the world — like “Earthquake” in Sensurround! They may as well all be one painting anyway, as the same sort of details and obsessions show up from one painting to the next. They’re often set near a strip mall. There are often sports figures in them. And figures from pop culture make cameo appearances. In one painting, Forrest Gump appears to be attempting to stop the Incredible Hulk. It’s not clear what the Hulk is up to, although, if the upside down house atop a nearby building is any indication, he’s chucking things.

McCann mostly paints with oils on linen in a style I will call “smudgy realism.” For the most part, his paintings look like photographs that have been put through a Photoshop filter, blurring them, so they are less about fine details than about a wash of color. But there are places on the canvas where he has loaded up his brush or palette knife with paint and just piled it on, in random clumps, so that it looks like part of the painting has fallen apart and is starting to pour forth as pure paint, like the magma that bubbles up under the La Brea Tar Pits in “Volcano.” Sometimes these disturbances in the painting take place in random spots on the frame, like the sky, or the top of the building. In one instance, somebody’s head seems to have erupted. 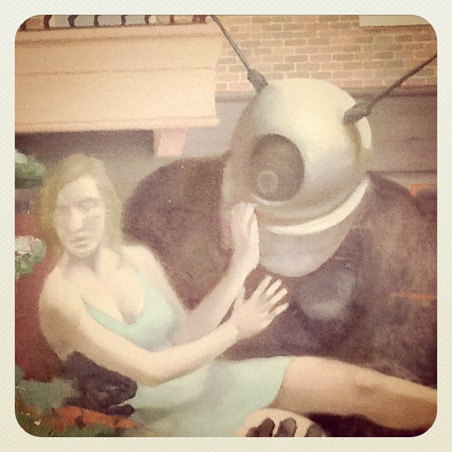 MinnPost photo by Max Sparber
Detail from “Superstitions Confirmed by the Wonders of Science” by Robert McCann.

McCann paints on very large canvases and fills them with details, some overtly apocalyptic, some subtler. There’s a strip mall with a person in a pup tent, which implies something has gone wrong, but nothing specific. Although, if you search the painting, you’ll also discover, in the background, there is a bear eating out of a garbage can. There are often little, odd details like this.

In one painting, a child seems to have tumbled to the ground, legs inside a cardboard box, clutching an oversized snail. There are often athletes: a runner crosses a finish line, bursting through police tape, while groups of little girls in swim suits line up on a sidewalk, like they are going to dive off of it. And there are observers, who seem unexpectedly casual, leaning against walls to watch, or lethargically pulling out their smartphones to snap photographs. My favorite details are two very small ones: In one painting, there is a little pile of feces, which is how you know things have really gone to hell. In another, a man is tossed around by an angry crowd, and his pants have opened to reveal his, well, let’s say his generative organ. Which is bright green. WHAT IS HAPPENING TO THE WORLD.

These are the subtle details of the apocalypse, but the end also comes in bolder strokes. Galactus, the world-devouring villain from the Fantastic Four, sits in the sky, in drag, holds what looks to be a pickup truck and eyeing it with little interest. Robot Monster, perhaps the cheapest monster ever made for a 1953 film that shares his name (he’s a gorilla costume with a diving suit head!) carries an unconscious woman. Dozens of people stand around in underwear, holding jars of their own urine, some making what seem to be awkward passes at each other. It’s the end of the world as we’ve never known it, and I feel fine.

The frames are so crowded with people — many of them taken from actual photographs — that I’m actually a little surprised I’m not in one of the images. Perhaps I am and  just missed it. I would be the one snapping pictures with my iPad.

SooVac also has three pieces on display by an artist named Jessica Teckemeyer, collectively titled “We Are Animal.” First, there is a sculpture of the heads of two snarling black hounds, conjoined at the forehead and not looking very happy about the fact, called “Reliance (Sinners and Saints.)” Then there is a mountain lion that hangs from the ceiling, clutching a knotted rope in its mouth, as though the animal has made a catastrophic error in balance and is just a split second before falling to the ground; this is titled, appropriately, “Derailed.” Finally, there is photo of the alarmed cat, available in an edition of 10, and named after the show. 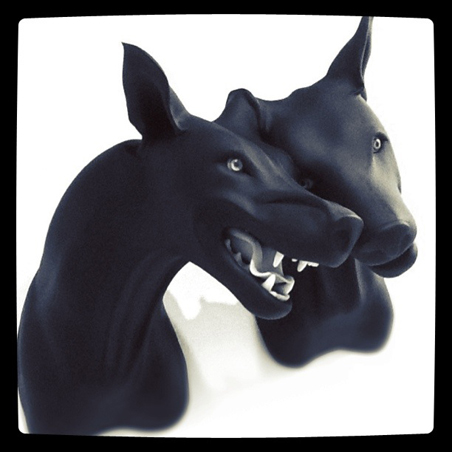 But they are not entirely beastial. The mountain lion has human eyes, and the expressions on the dogs are doglike, yes, but also humanlike, as dogs and humans seem to employ very similar expressions of frustration and outrage. In fact, dogs and humans both tend to duplicate expressions that they see, an unconscious act created by things called mirror neurons in our cortex. It’s tempting to just malinger by these sculptures and observe others watching them, to see if they mimic the bared fangs of the dogs or the jaw-clenching frustration of the bobcat — if the mere act of being exposed to art causes us to duplicate the expressions seen in the art, without realizing we are doing so. If so, Teckemeyer’s onto something. Not only are we animal, we’re the animals she created.

The pleasures of apocalypse: Two artists at the Soo Visual Arts Center