You may already know about Situationism, the French revolutionary movement that influenced the 1968 wildcat strikes in Paris. It also produced the extraordinary “The Society of the Spectacle” by Guy Debord, which argued, in part, that the lives we live are artificial creations, designed to transform us into passive consumers through the use of “spectacle,” such as mass media advertising. The Situationists argued for the creation of counterspectacles, and they were great ones for posters and graffiti with extraordinary slogans. My favorite is “Be young and shut up,” but they’re all magnificent: “Boredom is counterrevolutionary,” “In any case, no regrets,” and “Reform my ass.”

You may know about them thanks to cultural critic Greil Marcus, who wrote an entire book called “Lipstick Traces” tying together avant garde artistic and philosophical movements with the history of rock and roll, especially punk rock. And there’s no denying that Situationism influenced punk — one of the movement’s architects, Malcolm McLaren, was openly influenced by Situationism, along with the music of The New York Dolls and the fashions of Richard Hell. McLaren set out, very consciously, to create a movement. And it wasn’t too hard for him, as mid-70s Britain was experiencing a palpable sense of boredom, and was full of art-school students, pub rockers, fashion victims and wanna-be hoodlums who likewise felt that boredom is counterrevolutionary, even if they didn’t quite know who originally said it.

The unfortunate truth is that everything has the potential for boredom. I spent a year playing in local bars, and more often than not they were nearly empty of customers, and those who were there sullenly drank their beer and ignored the band onstage, whether the performers were likewise listless or were climbing the rafters and punching holes in the roof. No matter, though; American music has always labored under the myth of creating a spectacle, whether it managed to do so or not. I suppose Jerry Lee Lewis didn’t set fire to his piano every night. He really only needed to do it once.

Photographer Mark Murrmann, who used to be an editor for “Maximum Rock ‘n’ Roll,” seems to have a knack for being on hand when the piano lights up. About a dozen of his photographs are on display at the Stevens Square Center for the Arts as part of an exhibit called “Sweat Stains: Beer and Cigarettes,” and every single one captures a moment of spectacle. There is a shot of outsider garage rocker Billy Childish, as an example. Childish is middle-aged and wears shorts and long socks with sock garters, like a British accountant on holiday. In the photo, he is grinning, with his puckish eyes rolled heavenward, like a parody of innocence. But he’s holding a guitar like a machine gun, and has bent himself down into an extraordinary pose, down on one knee with his other leg extended behind him, like an especially advanced yoga position, or like a Medieval image of an archer. There is a long history of posturing in rock and roll, but this one seems like it actually hurts.

Murrmann has several images of a band called The Mummies, who dress themselves in white stripes of cotton, covering even their faces, and play with what looks to be wild abandon, lunging forward or clutching at their electric piano, which seems likely to tip over. Murrmann has also photographed what is described as the last show of the Radio Beats, and it must have been a doozy, and there is a cop on the stage, menacing the guitar player with a taser as the bass player looks on, alarmed. The band seems scarcely out of their teens. It’s impossible to know what the cop is telling them, but his posture says everything: Be young and shut up.

The whole of the “Sweat Stains” exhibit is based around the idea of rock ‘n’ roll, which gave curator Erik Farseth great license to approach the subject broadly, producing an enjoyable eclectic collection. There is, for instance, a pair of portraits of local hip-hopper Maria Isa by Janelle Olson. Oslon has photographed Isa dressed in oversized, electric blue, leopard-spotted  boxing shorts and a tank top, wearing a massive silver and gold rope chain, and put her in a boxing ring. Further, Isa’s face and neck are splashed with blood, and her knuckles are bruised and bloodied. Everybody should get their picture taken this way. 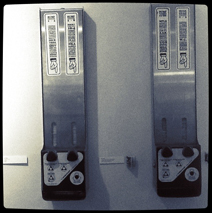 There’s an assortment of original rock and roll covers here, and event posters, and the like, which you’d expect to see. There’s also a condom machine, which is either a surprise or not, depending on how much time you’ve spent in bar bathrooms. The machine is by Mr. Mike, AKA Mike Haeg, and this one dispenses mini-comics, which, as anybody who has started discussing comics on a date can tell you, is a sort of prophylactic.

I know Mike Haeg. Years ago, I worked with him at the University of Minnesota’s radio station, which was then WMMR. I recall Haeg, along with others from the station, going to a taping of a television show — “Good Company,” I believe. The rest of the college radio gang watched Steve and Sharon, or whoever it was, but Haeg spent the entire taping glaring at the camera that was set up to catch audience reaction shots, so that home audiences would find themselves the subject of gimlet eyes as they tried to watch television. Haeg is currently the mayor of Mt. Holly, Minn., which is the smallest town in the world, consisting of Haeg’s home, his wife, and his children. Whether Mt. Holly actually exists or not isn’t entirely clear; Haeg claims to have managed to make it official thanks to some sneaky maneuvering, but this may be a legal fiction. Whatever the case, Haeg cheerfully insists on behaving like a real mayor, passing out keys to the city, attending parades, and throwing regular city events that take place, as far as I can tell, in his basement. So Haeg has always been a sort of a living embodiment of the counterspectacle that the Situationists envisioned.

“Sweat Stains” closes Saturday Night, with a reception and music. Will anything exceptional happen? Who knows, but with rock ‘n’ roll, there is always the possibility that a spectacle with break out.

This past weekend I went to the year-anniversary of Urban Arts in St. Paul, the first time I have visited. Urban Arts is located in a very large industrial building about a block down from The Dubliner, and let me interrupt now to say that I don’t know what it says about me that I have started to map Twin Cities locations by their proximity to Irish bars. Anyway, Urban Arts has an appealing democracy about it — it showcases several dozen artists of wildly varying experience and style. Not all of it was to my taste — some seemed quite jejune — but art doesn’t have to be to my taste, and I think it’s important for every artist to have someplace to show their art. Unless you’re Emily Dickinson, and you aren’t, you should try to have both your failures and successes be as public and as extraordinary as possible.

I shall focus on what seemed to be successes to me. I was particularly taken by a series of photographs by Katelyn White, which she called the “Hennepin Avenue Series,” either inspired by or innocent of the exceptional work of Wing Young Huie. I presume the photographer is aware of Huie’s work, however — her photographs share with his “Frogtown” series a spontaneity and wonderful sense of the character of her subjects. They are young people, mostly boys, snapped in the streets. Some respond shyly, covering their faces, and some are brash and press their faces close to the camera, grinning. Some have high, neatly cut hair in something like a pillar atop their heads, like Kid from the hip-hop comedy troupe Kid ‘n Play, and some of these haircuts have single, geometric patches dyed, I presume, blond; I can’t be sure, as the photographs are black and white. I haven’t actually seen anyone with this sort of haircut before, although I spend a lot of time on Hennepin Avenue. It’s probably for the best, as I think I might just spontaneously applaud. 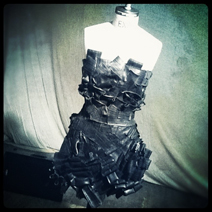 I was also struck by two pieces by an artist named Brian Jensen, who identified himself in his art by his fine art and design business name, 11thwonder.com. He had taken a pair of existing images and painted over them. I don’t know if there is a proper name for this (although the Situationists called it “détournement”), but I have several similar pieces called Woodgills, that are likewise painted over thrift-store images. In one, Jensen has taken a homey photograph of a living room and placed a Victorian man in a bowler hat and a group of bemused looking raccoons, all drinking tea. And a pair of dresses caught my eye, created by Drew Kleiner; they were very chic, looking, from afar, to be made from black lace ruffles. But the closer you got, the more fetishy they looked, as it became clear they were, in fact, made from rubber. In fact, they were constructed out of bike tires, which may be the most fetishy thing of all in the Twin Cities.

The biggest success of the evening was the party itself, which featured performances by B-Girl Be and an extraordinary looking drag artist named Esme Rodriguez. I didn’t stay around long enough to see Rodriguez actually perform, as my weekends are spent in a mad rush from one event to another; I shall have to make certain to do so in the future. In any case, no regrets.