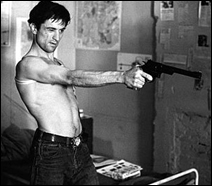 There’s a lot to say about Martin Scorsese’s “Taxi Driver,” filmed in 1976 and screening this weekend at the Trylon Microcinema. They’ve been offering a retrospective of films featuring soundtracks by Bernard Hermann; this was the last film he ever scored, and the film is dedicated to his memory. It’s an interesting score, unexpectedly jazzy, with angular harp figures and a stirring, lonely saxophone. I also think it’s the wrong score — it’s classically cinematic in a way the film isn’t, feeling like it might be right playing behind a 1940s detective film. But the soundtrack that would have been right for it was still to be invented when the film came out, and was inspired by “Taxi Driver”: punk rock.

A lot has already been said about “Taxi Driver.” It was approximately Scorsese’s fourth film, and his most ferocious. Most of you have no doubt seen it by now, but for those who haven’t, it details an alienated cab driver, a Vietnam veteran played by Robert De Niro with a perpetual scowl, a hunched walk, and, at the end, the Mohawk haircut affected by soldiers who were going on suicidal commando missions. After a bumbling, humiliating attempt at romance with Cybill Shepherd (he brings her to a porn theater on their first date) and an endless number of psychotic late-night monologues and encounters in the cab, he hatches a plot to kill a politician — a plot that inspired John Hinckley Jr.’s attempt on Ronald Reagan’s life. When this doesn’t pan out, De Niro turns avenging angel, rescuing a teen prostitute (Jodi Foster) from her pimp (Hervey Keitel) in a scene of extraordinary carnage. The film was celebrated and pilloried when it came out, but has come, through a long period of critical examination, to be seen as a classic.

It’s the carnage I want to talk about. Scorsese has never shied away from graphic violence, and in “Taxi Driver” he makes this impulse explosive. It must be, because it’s a movie of extraordinary despair and hostility. De Niro’s character, Travis Bickle, seethes with contempt; as he drives his cab in the evening, he eyes people in the street as the soundtrack features snippets from his diary, which act to vocalize his thoughts. “Someday a real rain will come,” Bickle says in a numb monotone, “and wash all this scum off the streets.” And who are the scum? He lists them, and it’s an inventory of racial and sexual rage.

One night, De Niro picks up a passenger, played by Scorsese himself, who claims to have a 44-Magnum. Parked outside an apartment building, Scorsese points out a woman in a window. His wife. “But that’s not my apartment,” he says. In a looping series of questions and giggling statements, Scorsese maps out his plan to kill his wife, and it’s grotesque. This is the specter of violence that haunts the film, and so, when the moment comes for actual bloodletting, it must, by virtue of all that has come before, be monumental.

The whole sequence takes about eight minutes, and is catastrophic. Nobody dies easy in the film, and they all fight back, the act of violence turning them into shrieking, gore-drenched, almost subhuman figures. There are only three people who die in the brothel hallway at the film’s end, but, oh Lord, is it a mess. Scorsese spends a solid minute and a half after the shooting with a series of tracking shots back through the hallway, focusing on details of the carnage: a spattered gun; a splash of blood on the wall; a slumped corpse. Scorsese had been building toward this moment throughout the film, a remarkable reversal of the usual cinematic trope of a climactic gunfight providing catharsis and resolution. There is no catharsis here, just a hideous ordeal, and there is no resolution but for a disturbing ironic coda. Scorsese’s tracking shots make it clear that what we have just witnessed isn’t an act of redemption, but a crime scene. 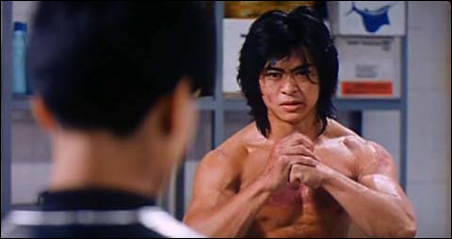 Another revival this weekend is pretty much the mirror image of “Taxi Driver,” although the amount of blood produced by this film makes “Taxi Driver” seem like one of those puppet shows that children put on for each other at birthday parties. The film is called “Riki-Oh: The Story of Ricky,” and is a Chinese adaptation of an especially delirious example of Japanese comic books.

The film will play tonight and tomorrow around midnight at the Riverview Theater (11:30, to be precise). That’s just perfect, as this is the sort of film one should see at a midnight movie, which, in my experience, always seems to take on a dreamlike quality, especially if you’re prone to falling asleep. This is not a film that works like regular films. It has a plot, yes, such as it is: It tells of a young man with near-superhuman strength who confronts corruption in a privatized prison. But that isn’t a plot so much as it is an excuse for a series of set pieces in which Riki-Oh, the ostensible hero, battles a series of gang bosses and, eventually, the warden. The film has attracted a cult following because these scenes are … well, there’s no polite way to put it. They’re not sane.

Riki-Oh is the master of a form of martial arts called Chi kung, an actual practice reinvented as nonsense in this film that allows the hero to survive attacks that would shred an ordinary human. The actual martial art comes with the risk of something called “Qi-gong psychotic reaction,” which the whole films seems to have been made under. Both kung fu films and Japanese comic books can be pretty violent, but this is either the summit or the nadir of that trend, depending on your viewpoint.

Whatever the case, the violence is excessive. Riki-Oh doesn’t just punch people, he punches through them. A villain is capable of bursting an enemy’s head just by clapping his hands onto them, an image that was used, for its first few years, on “The Daily Show” to introduce Craig Kilborn’s “Five Questions” sequence. The whole film seems to view the human body as just a walking bag of fluid, which can be smashed and explode at any moment — which, in fairness, is sort of true. This is a film that would test any critic’s vocabulary of mutilation, as there are hackings, gougings, severings, impalements, eruptings, and, when the film reaches its preposterous climax, a series of meat-grinderings.

As it happens, this is all done with special effects that look manufactured by a group of 10-year-olds in their backyard with an ancient 8mm camera, some papier-mâché, and a few hundred gallons of Karo syrup. So the ultraviolence of the film isn’t the punishment of Scorsese’s finale, but instead a camp spectacle. When bodies fall from roofs, they are clearly dummies. When body parts are smashed, they are clearly artificial constructions. The blood seems real, but there is too much of it, like somebody is using a garden hose to spray that red fluid that maraschino cherries come packed in. This is consistent with the rest of the film, which features acting that is so hammy as to border on burlesque and a soundtrack that sounds composed on one of those $15 Casio keyboards you can still buy in thrift shops.

So there it is. There will be blood this weekend, and there will be a lot of it. Depending on your tastes, it can be in service of a troubling classic or a deranged cult oddity. I recommend both about equally, because both, in their own way, are extraordinary. Go to both, if you dare! At least it will give you something to talk about on Monday around the water cooler when everybody else essays their dull weekend of drinking beer in bars and watching sporting events on flat-screen televisions. “And what did you do?” they’ll ask you.

“Oh, not much,” you can answer. “Although I did see a guy explode.”