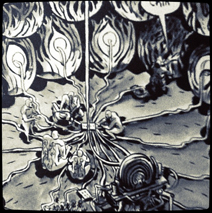 MinnPost photo by Max Sparber
A detail from “Death-Day: Part One” by Samuel Hiti

It’s been a long time since I’ve read a graphic novel like “Death-Day: Part One” by local artist Samuel Hiti, and I’ve never read one that’s just like it. It’s a bit like an old EC war comic book, such as “Frontline Combat,” in that it follows a small detachment of soldiers on a suicidal mission behind enemy lines, with great care taken to detail their mission and the psychological toll it takes.

But it’s also a bit like an old science-fiction comic, Heavy Metal, in that it’s set on a world that is genuinely alien — the enemies are enormous, six-limbed, jackal-headed monsters, while the humans takes their orders from severed heads in jars. And it’s a bit like a series comic auteur Frank Miller released in 1990 called “Hard Boiled,” in that the detachment’s leader is partly mechanical and possibly psychotic, and that, during action scenes, the frame is filled to bursting with detail — battles in this book look, from a distance, like swarms of insects pouring over each other.

The book came out in the past year and is the first of four, which leaves it terribly incomplete, but tantalizingly so. Hiti is parsimonious in his storytelling, and this work is defined by a near-total lack of exposition. Most of the context of the story is left untold, and what is told is doled out in teaspoons. We do not know why this war is taking place, or what world it is on. We don’t know whether humans are the aggressors or the defenders in this war. For much of the book, all we get is a grunt’s eye view of the action — orders are given, and they aren’t explained. So all we are left with is the mission, which is to destroy some sort of huge black orb that will apparently disrupt the enemy’s defenses in some way.

I don’t mind this; in fact, I hope it’s never explained. In speculative fiction, there’s a theory called the One Big Lie. The idea is that readers are willing to believe one essential conceit, as long as the rest of the story supports it — that, say, there are vampires, or that people in a neighborhood are being replaced by intelligent vegetable pods, or that Martians have landed in Grover’s Mill. For my tastes, not only do I think audiences believe the big lie, but I don’t think they need to have the lie explained to them. In this case, we’re witnessing war in an alien land, and it’s finely detailed. We don’t need the particulars of the backstory spelled out for us.

Much of the pleasure of this story is in the artwork anyway. Hiti likes a crowded frame, and fills it with details added in with a thick brush and extensive shading — images in his illustrations are often in silhouette. There’s a deliberate sloppiness to his style, in that all of his lines seem to quaver, and the shading won’t quite reach its border, or will overshoot it; it gives the whole comic a jittery feeling, like it was composed in a mad rush. This is self-evidently not the case, as some images are so crammed with details that they must have taken hours to complete. But the sense of frenzy Hiti communicates with his style contributes to an overriding feeling that the mission we are watching is an act of lunatic desperation, and not a careful scheme at all. 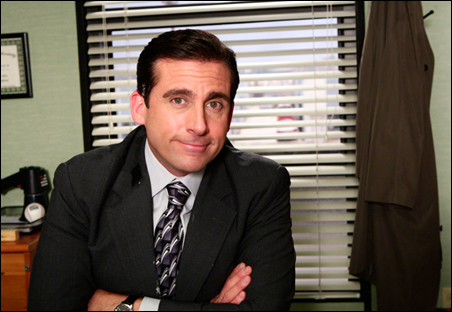 Courtesy of NBC
Steve Carrell as Michael Scott in “The Office”

I’m going to switch gears rather suddenly to talk about the final days of Michael Scott on NBC’s “The Office.” But I don’t think it’s actually that dramatic a shift, as one gets the mounting sense of lunatic desperation on NBC’s part as a result of this seismic shift in one of its flagship shows. The past three episodes have started the process of easing Scott — and Steve Carell, the actor who plays him — off the show. This cycle will culminate this Thursday with his final episode.

NBC can’t be happy about this. It wasn’t their decision, but instead Steve Carrell’s, who has become quite a viable comic film actor during his seven years on the show. And American television shows are rarely retired during their prime — instead, they are just left to slowly run out of steam and eventually canceled, long after it would have been wise to do so. Carrell could be stuck in a show that is slowly dwindling in audience and quality for years, and he may have made a very wise choice to bow out early.

But it’s not often that shows survive the loss of their main character, which Carrell inarguably is. In the original British production, there were two central characters: an absolute monster of a boss, played by creator Ricky Gervais, and a winningly juvenile salesman, played by Martin Freeman, who had a lovely, faltering romance with the office receptionist. This was re-created in the American version, with Carrell in the Gervais role and with John Krasinski in the Freeman role. But it has been years since Krasinski was wooing the receptionist, Pam. They are now married and have a child, and the writers seem to have lost the thread of the story with them. Both have been relegated to a sort of a Statler and Waldorf status, watching Michael Scott’s shenanigans and commenting on the ridiculousness of it all.

In fact, this has happened to almost the entire supporting cast of the show, which is a pity. The British “Office” only lasted a handful of episodes, and so kept its focus tightly on a few characters. The remainder of Gervais’s staff were undeveloped, functioning mostly as embarrassed faces in a crowd, responding like deer in headlights when Gervais made a fool of himself. The American “Office” has benefited from its extended run in that it has been able to give each of its characters distinct — and richly comic — personalities. We know each of the characters on the show, we know all of their jobs, and each has had their own storylines. It was, for quite a long time, one of the finest ensemble comedies on television.

But sometime in the last few years, the show’s creators lost them as characters and reduced them to caricatures. None of them have their own ongoing external storylines now; instead, they’re defined by their quirks. Angela, for example, was always one of the show’s more demented creations. Played by Angela Kinsey, she’s a diminutive accountant whose politics and personal life put her somewhere on the lunatic fringe. Sometime last season, the writers gave her a state senator as a boyfriend, and that was it — she ceased to be a character at all. And so it has been for almost all the main characters on the show.

I think this is demonstrated by the fact that the show has to keep bringing in ringers and outsiders to goose the storyline. Last season, they brought in Kathy Bates as a new boss. For a short while this past season, they had Michael Scott hire a new salesman who threatened him. And then they brought in the show’s traveling salesman, Todd Packer, for a few disruptive episodes. Neither the new salesman nor Todd have been seen since, and no mention has been made of them.

But there was always Michael Scott. The writers have been able to rely on him being the center of the show, thanks, in part, to Steve Carrell’s extraordinary skill in playing him. There is nothing bad that can happen that Michael Scott won’t make worse, and there is nothing good that can happen that won’t threaten Michael Scott’s shallow ego and he will try to sabotage. He’s the worst boss in the history of television, and that’s a character that you can always have fun with.

But Carrell is leaving the show, and it’s telling that the questions that everybody is asking is “Who will replace him?” It’s also telling that briefly Will Ferrell is filling the role, which he seems to treat like it’s as a sort of favor, filling in the gaps in the show with some pretty typical Ferrell schtick.

Had the ensemble remained strong, there would be no need to ask who can step into Michael Scott’s shoes, and there would be no need to replace him. There would be so much already going on, with each character enmeshed in their own compelling storyline, that the question of who would manage Dunder Mifflin would be  academic — after all, nobody has ever really managed the office. Michael Scott mismanaged it. Instead, the show now faces the fact that its only viable character is leaving, which may explain why they have gotten so maudlin in the past few episodes. This past Thursday, the whole cast spontaneously sang a song from “Rent” to honor Scott’s leaving, and Michael Scott himself has been maturing by leaps and bounds for about a month now. It’s as though the writers can’t stand to send him off as the wretch he has always been, but want, instead, for Michael Scott to become sympathetic and his leaving to break our hearts.

But it isn’t anybody’s heart that is breaking just now. It’s the show that’s breaking. The writers will have to scramble to figure out some way to keep “The Office” going, post-Michael Scott. I would suggest revisiting its ensemble and rediscovering what can be done with these characters. I suspect, instead, the show will simply try to find somebody they can dump in Steve Carrell’s place, which would be fatal to the show.

Perhaps, as somebody who has always had great affection and respect for the show, it is time for me to follow Carrell’s leave and bow out now, before things fall apart.