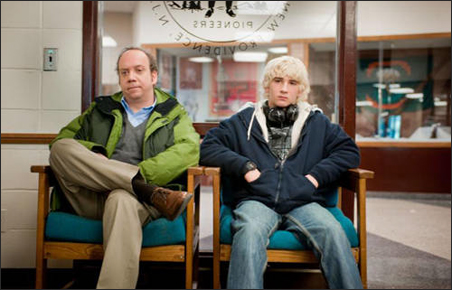 I have a theory about film actors, and I think it is mostly borne out by the facts: I think most successful film and television actors were not high-school drama nerds, but weirdo jocks. Film is a visual medium that relies very heavily on the spectacle of physical action, and the truth is that, for the most part, kids like the one I was — tall, thin, unmuscular, and decidedly hangdog — don’t look credible leaping off buildings with guns in both hands. But you get somebody from the track or basketball team with an attractive face and expressive eyes and, holy cow, box-office gold.

I came up during the ’70s, when the situation was reversed — it was the era of the character actor, with movies’ stars cast for their distinctive faces and extraordinary personalities. And so we had, say, Walter Matthau starring in “The Taking of Pelham One Two Three,” a taut thriller in which an old Jewish man with hunched shoulders and a face like a well-worn shoe chased after professional criminals in New York’s subways. Gene Hackman was a star then, and, sure, he was physically capable — he had been a marine for four years — but I don’t expect he was cast in “The French Connection” because of how good he looked sliding along the hood of a car so much as how well he wore a porkpie hat. Make no mistake, I’m a fan of James Franco, but he’s no Popeye Doyle.

So it is heartening that film still has a place for somebody like Paul Giamatti, who can be seen now in “Win Win.” He’s a heavy actor with hair, where he has it, like steel wool and a face like a doleful basset hound. Steve Martin once wrote a story in which Michael Jackson’s face, which had so much plastic surgery that it was incapable of expressiveness, envied Walter Matthau’s; it would envy Giamatti’s as well. The whole of “Win Win” is composed of a selection of wry looks from the actor; he always seems to suspect he may be the butt of a joke that he’s not entirely getting.

And the whole film is cast like a ’70s movie. My god, the faces in this film! There is Amy Ryan as his wife, and she has one of the loveliest smiles in film nowadays, but on a remarkable, pointed face that’s not the characterless, almost cartoonish prettiness of many young actresses. The plot has Giamatti, a lawyer in a small Jersey town, taking responsibility for an older man, mostly as a result of a financial crisis. The older man is played by Burt Young, one of the classic film character actors from the ’70s, a man with heavy-lidded, humorous eyes and a mouth like a contemptuous hawk, if you can imagine such a thing. Young’s grandson shows up, escaping a somewhat miserable home life, and he’s played by a newcomer named Alex Shaffer, who has an unkempt head of startling blond hair, a long face, and a quiet self-confidence that is masking a whole range of deeper wounds. As it turns out, the young man is a potential champion wrestler, and Giamatti coaches the high-school wrestling team.

And there’s your plot. It’s small and sweet, with enormous focus on character, all of whom are carefully cast. Giamatti’s assistant coaches, as an example, are played by two of today’s most appealing character actors, Jeffrey Tambor and Bobby Cannavale, and both are given as much screen time as they need to inhabit their characters’ eccentricities. And although the previews sort of present this movie as a sports film, it isn’t, really; Giamatti’s team is terrible, almost to a Bad News Bears level, and it  never really improves. But Shaffer is good enough that he could potentially get a college scholarship, and the conflict in the film is that his deadbeat mother shows up and wants him back. It’s all very well detailed by writer/director Thomas McCarthy (who was responsible for the similarly excellent “The Station Agent“), and his decision to populate it with expressive faces, rather than attractive nonentities, makes the film irresistible. 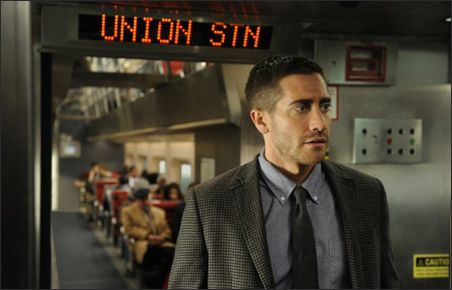 Director Duncan Jones is another fellow who is influenced by ’70s filmmaking. He was responsible for “Moon” from a few years ago, which was an visionary science fiction film that captured something that has been mostly lost in the genre — the sense of space as an extraordinarily lonely place. Jones deliberately drew from science-fiction films of the ’70s and early ’80s for “Moon,” including “The Man Who Fell to Earth,” which starred his father, David Bowie.

Jones now helms “Source Code,” which swaps out the loneliness of ’70s sci fi for the cosmic trippiness of the genre in the ’60s. It tells of a soldier, played by Jake Gyllenhaal, who seems to be missing most of his memories, and is thrust into a mission he doesn’t understand.

He is repeatedly sent to a train that is about to explode, and he has eight minutes before it becomes a fireball to figure out who did it. If he doesn’t find out — well, he just gets sent back again, despite the fact that his failures mean he gets to experience his own death in the fulmination, which isn’t much fun for him. Further, he finds himself attracted to one of the other passengers, and must watch her die over and over again. Further, it’s an actual train, and actually exploded earlier in the day — everybody on it is dead, and he’s revisiting their deaths.

Jones is also a director who has a taste for unusual actors. Gyllenhaal has done a few action films, but he’s really somebody who came to public attention for his starring role in the similarly trippy “Donnie Darko,” which also dealt with themes of time travel. He has a jumpy, nervous energy here, and he’s sort of bad at what he’s supposed to be accomplishing. He repeatedly follows the wrong leads, roughs up the wrong people, goes off on his own personal tangents, and, on one occasion, gets himself killed, much to the frustration of his superior officers, Vera Farmiga and Jeffrey Wright, who just send him right back to the train again.

I don’t wish to ruin the ending for you, but I will say that some have complained about it. It could end one of two ways — very downbeat, or happily, and you may be hoping for one and discover it chooses the other. Some have claimed the ending must have been forced on Jones, because it seems out-of-step with what the film has been setting up. I didn’t think so.

The possibilities for both endings are embedded in the text of the film throughout, which revolves around whether it is possible to save the people on the train, which Gyllenhaal desperately wishes to do. They certainly cannot be saved in this world, as they have already died here, but the film allows for the possibilities of alternate universes, where people’s lives have taken a different course, and what happens here does not need to happen there.

This was also a theme that was quite popular in ’60s science fiction, and it’s a tantalizing subject, the sort of cosmically intriguing question that good sci fi is built on. Does it exist in this film, and does Gyllenhaal find it? Well, I’m not going to say. But if you didn’t like the choice this film made, it is useful to imagine there is another reality in which the other choice was made.

‘Win Win’ and ‘Source Code’: The pleasures of the character actor