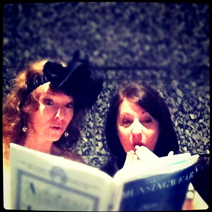 Specifically, I was at RetroRama at the Minnesota History Center. The event is annual and celebrates vintage clothes. This year, it was coupled with an exhibit and a book, both dealing with the subject of unmentionables. The exhibit: “Underwear: A Brief History.” The book: “In the Mood for Munsingwear” by Susan Marks, who I have mentioned previously in this column, and who I have taken great pains to be friendly with, because she has unusual interests and pursues them.

She has a taste for the silly and the sublime, which I share. She was our guest reader a few weeks ago when my girlfriend, Coco, and I read from our book about the history of the cocktail, “Bunny and Coco Get Smashed.” We read stories of the sour-toe cocktail, a drink in the Yukon that has an actual fermented human toe in it. Marks read a section of her book detailing a detective’s attempts to bust up a black-market underwear ring working out of Munsingwear.

You’re expected to dress up for RetroRama. Some people are not very good at this — in their dressiest clothes, they look like they should be carrying a bindle stick and carving nickels into folk art. But there are a number of Minnesotans with decidedly sadomasochistic tendencies when it comes to clothes, in that they want to be fashion’s victim, or its master. And so the History Center was full of fedoras and vintage dresses, worn, by some, with more eagerness than style, and by others with more style than sense, which is how I think a party should look. 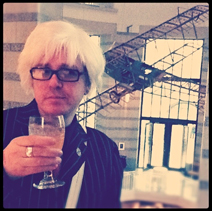 We went with the latter option: I dressed in my favorite mod suit and an Andy Warhol wig, which got me accosted by Warhol fans who had been denied a chance to get a photo with him in life, and so weren’t going to pass up a chance to pose with his simulacrum. I was happy to do it; it felt very Warholian. And I never turn down the opportunity to be in a photo.

Coco, in the meanwhile, dressed exactly right for the party, in a 1960s foundette, which is an undergarment that looks a bit like the sort of swimming suit that Esther Williams used to wear. Although Coco isn’t usually a shy person, the idea of wandering around the History Center in her unmentionables gave her a succession of nervous breakdowns before we actually arrived at the event, but once there everybody began demanding to see her undergarments and so she complied.

There was a specialty cocktail there, as I think there should be at every party. This one was called the aviation, and it’s a classic, but rarely made. It’s created using a traditional formula for a cocktail: a base liquor, a second liquid to mix with it, and a third flavor to perfume it. In this case, the base liquor is gin, the second liquid is lemon juice, and the perfume is maraschino liqueur (sometimes it is also made with crème de violette, and I think it should, although it wasn’t last night). The results are essentially a classic gimlet with a cherry aftertaste, and the whole of it just feels obscenely sophisticated, like one should be staring at an airplane and talking with Howard Hughes when he was still young and handsome and not old and mad. In fact, the history center has an airplane hanging from its roof, a single-prop, wooden-winged thing that looks like it should be out barnstorming or dumping pesticides onto a field, but somehow got word there was a party and decided to come. I stood under that and drank and wondered if anybody might be dressed as Hughes.

The “Underwear: A Brief History” exhibit is indeed brief — it’s just one room and a few dozen examples of brassieres and union suits and merry-widow ensembles, all from Munsingwear. But there doesn’t need to be a superabundance of undergarments for a show to be worthwhile. I used to obsessively go to Frederick’s of Hollywood on Hollywood Boulevard when they had an underwear museum, and it was only a few items, but it included Madonna’s conical bra designed by Jean Paul Gaultier. It was thrilling and also, if one tripped on the way over to examine the undergarment, potentially lethal. 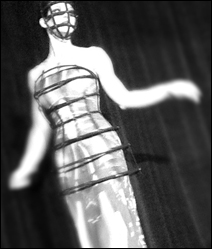 RetroRama generally includes a fashion show, and last night was no exception. From what I can tell, many designers look upon fashion shows as an opportunity to create clothes that no sane person would ever wear in public, and the world is poorer for its sanity. The standout last night was a piece by Chris Straub that made literal the idea of fashion victimhood, inspired, I presume, by just how confining old underwear could be. He very literally built a cage for his model, wrapped around her midsection like a combination corset and iron maiden, and encasing her face in a similar cage that wouldn’t look out of place on a hockey goalie, or Hannibal Lechter. Why don’t people dress like this for fancy dinner parties or to friend’s weddings? I am sure Grace Jones does, and the world needs more Grace Joneses.

The great thing about RetroRama is that, at the end of the fashion show, the party guests are invited to line up and take their turn on the runway — oh god, how thrilling! We finally get to be Chloe Sevigny! Coco and I immediately rushed to get in the line. I had a wine glass in my hand, which Susan Marks noticed. “Are you going to take that onto the runway?” she asked, and then stopped herself. “Of course you are.”

Of course I was. I toasted the crowd with it as Coco and I strolled the runway, and the crowd cheered back at us. It’s a good thing I hadn’t drunk more of that wine, or they would have needed to call security to keep me from just walking back and forth on the runway all night. 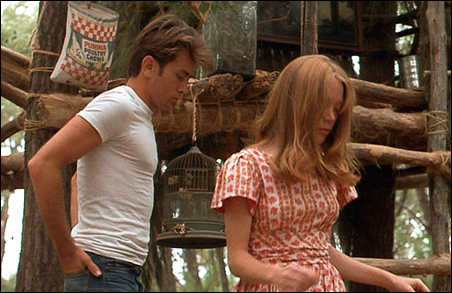 The only thing more glamorous than being a fashion model is being a criminal, and sometimes there isn’t much difference between the two, as director Terrence Malick understood when he made his terrific 1973 crime film “Badlands.” It plays tonight at the Walker as part of a retrospective of Malick films, which is an easy retrospective to do. Malick only releases about one film every 300 years, and they are so idiosyncratic and extraordinary that people brood and fuss over them forever. The New York Times did a piece a few years ago about Malick’s “The New World,” which they described as “epochal” and interviewed people who had gotten obsessed with the film, seeing it dozens of times in the theater. But all of his films are epochal. I’ve seen “Badlands” maybe 30 times. And that’s just in the time between when Malick put out his last film and his current one, “The Tree of Life,” which opens at the end of this retrospective.

“Badlands” is based on two of America’s more charming spree killers, Charles Starkweather and Caril Ann Fugate, who were attractive (especially Starkweather, who had a real James Dean quality to him) and unfailingly polite, but also managed to kill 11 people in Nebraska and Wyoming in 1958, including Fugate’s parents and her 3-year-old sister. It’s a good subject for artistic exploration — Bruce Springsteen used it as the starting point for his album “Nebraska,” which I think is his best work.

Malick casts Martin Sheen, then looking like he was just out of puberty and a dead-ringer for James Dean, and Sissy Spacek in the Starkweather/Fugate roles. The whole of it is narrated by Spacek, and she’s perfectly captured a tone of self-absorbed idiocy — her narration sounds like passages from a diary that might discuss shopping for clothes or readying for Christmas, but in fact describe a sequence of brutal murders. Sheen is no criminal genius either — his crimes are fumbling afterthoughts, and he barely seems aware of the fact that he’s killing people. He tries to make everything momentous, but is neither skilled nor smart enough to do so. In one scene, he decides to create a makeshift marker on the spot where he and Spacek have a romantic tryst, but it’s just a pile of rocks, some of which he later throws out for being too big.

The soundtrack is great, including a perfect placement of the song “Love is Strange” by Mickey & Sylvia that is likely to make you forget “Dirty Dancing’s” use of the same song. It’s a piece of music that has always sounded to me like it’s written by a pair of kids who are play-acting at adult experiences of romance (“Come here, lover!”) but it’s over a skittish guitar riff with a lot of reverb that sounds positively deranged; it’s the perfect theme for these star-crossed dingbats, who wasted 11 lives, or 13, if you include their own, in two months in 1959.

Where were they headed anyway? A runway, perhaps; Starkweather certainly could have been a professional model. But, then, he was the sort of guy who might hold an entire fashion show hostage, cluthching a Gaultier-designed shotgun. And that’s the sort of fashion show I want to go to.

Criminally underdressed: RetroRama at the History Center; ‘Badlands’ at the Walker