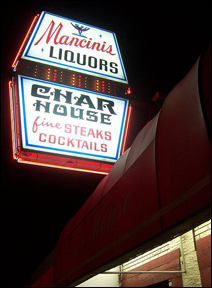 City Pages had their Best Of party last night. I remember writing for that issue, years ago. I don’t think they completely trusted my tastes, because while other writers snapped up “best local celebrity” or “best manicure,” I was always saddled with “best bathroom” and “best adult gift shop.” And so be it. I was always a little suspicious of best-of issues anyway. They always struck me as being crassly motivated. Readers snap up best-of issues, but are they really that useful, especially now? Best bike shop? Best florist? I can go online and get recommendations, or see reviews of local businesses. I don’t really need to wait for the one time per year that City Pages’ readers and staff pick winners, and their choices always seem somewhat arbitrary. Heimie’s Haberdashery gets listed as best men’s clothing store, and so it is, if you have a waxed mustache and wish to dress like you’ve joined a barbershop quartet. However, if your tastes are for lizard-skin cowboy boots and Nudie’s of Hollywood-style western shirts, Heimie’s is not your place.

I know a newspaper’s sales staff positively drools over best-of issues. It’s one of the few times in the year the wall between editorial and sales breaks down, and perhaps this isn’t worth remarking on. Newspapers have to make their nut somehow. If it’s by declaring a bunch of local business to be the best at something or other, well, maybe this sort of mutual back-scratching society has its uses. At the very least, we get a party out of it.

The party was at Mancini’s Char House in St. Paul, which is one of the great St. Paul eating institutions, a swank steak house with an accompanying bar that’s just loaded up with leather-bound booths, looking like the sort of place Frank Sinatra, Dean Martin and Sammy Davis Jr. might meet at after hours to plan a heist. Mancini’s was credited with having the best martini in the Twin Cities, and I had one at the party and immediately threw it out. A vodka martini is not a martini, and this is the sort of thing I throw embarrassing fits about. I’m also quite specific about the vermouth used, and will send a martini back if it’s not cold enough. I am so particular about my martini that I should be the one writing about who makes the best one.

(I’ve had very good ones at the Bradstreet and at Cosmos, which are convenient just upstairs and downstairs from each other, which makes it easy to stagger from one to the other and back again; I especially recommend Plymouth or Boodles gin, although I’ll sometimes have Old Raj if I’m feeling spicy, and I like Noilly Pratt vermouth when I can get it.) However, I suspect it is my extreme finickiness that guarantees I will never be asked to write about the best martini. Most people drink vodka martinis, and don’t want somebody like me coming up behind them and shrieking that what they’re imbibing is actually a drink called a Kangaroo, and its only defining characteristic is that it mostly tastes like olive and rubbing alcohol. 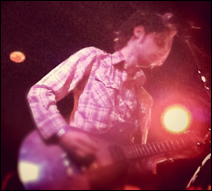 Ketel One was offering samples of other drinks, though, and it had one that combined its Citroen-flavored vodka with lemonade that I rather liked, and so I drank about 40 of them. I was there with my girlfriend, Coco, who writes for City Pages’ Dressing Room blog, and when the drinks took effect she grabbed a plate of cookies and walked around Mancini’s bar like a cigarette girl, offering baked goods to anyone seated at a booth. We then settled in to chat with a woman we’ve seen for a few years tootling around town on a motor scooter, which had always struck us as seeming very chichi, so we had been wanting to meet her for years. At it turns out, she manages bands, and so she immediately whisked us off to Seventh Street Entry to see Phantom Tails, whom City Pages selected as their best new band.

I don’t write about music as much as I’d like to, and, when I do, I usually try to focus on the sorts of noises that go uncovered or little-covered elsewhere. There are, after all, quite a few rock journalists in this town, and they seem to do a good enough job covering the scene as to make anything I might write redundant. But I do like rock music — I am, after all, in a punk pop band that I expect will be declared the best new band of 2012. And I like the Seventh Street Entry, although I rarely go. I expect it’s because somehow I always manage to show up when something extraordinary is happening, and I don’t especially want my track record ruined. I’ve been there on the first night Babes in Toyland ever played the Entry. I saw Gwar there once, which was a preposterous show to see in such a tiny space, as the band dresses like villains from The Mighty Morphin Power Rangers and acts out scenes of brutality and dismemberment, with accompanying geyseric eruptions of fluid.

The last time I went to the Entry was to see a psychedelic noise rock band from Japan called DMBQ. At the end of the show, the lead singer dissembled his drummer’s trap set as the drummer valiantly attempted to keep playing it. The vocalist moved the drum set out into the crowd and built a little tower out of it. He then climbed to the top of the tower, opened his pants, and set fire to his pubic hair.

That’s a hard show to top.

Fortunately, as it happens, last night didn’t break my Seventh Street Entry streak. Phantom Tails aren’t quite so outré, but they are excellent, combining poppy guitar and bass riffs with a drum machine and a Korg synthesizer, and the results sound a little bit like somebody decided to base a rock band around the soundtracks to home computer games from the ’80s. They were followed by a two-person band called G-Biz, who got in a bit of hot water some months back for promoting a show with a flier that coupled Michele Bachmann’s name with an obscenity. I believe they were in earnest with this expression of contempt for the congresswoman, but the results functioned like a classic piece of trolling. She got upset and made a public stink about it, which gave the band a lot of free publicity and some street cred, and made her look a little silly. After all, who cares what a rock group you have never heard of says about you? When you’re going to feud, always feud with people who are at your level or higher; that’s just basic PR.

For some reason, G-Biz is sometimes identified as hip-hop. Maybe they made hip-hop at one point. Last night, they mostly produced what I recall as one long, uninterrupted roar of noise, all coming from a little electric box and the singer’s relentless vocals. (The singer’s name is MC Gringo Blingo, by the way, which is impressive.) I had been exploring Seventh Street Entry’s selection of rums for about two hours at that point, so I apologize that my memory isn’t clearer, but I do recall liking it quite a bit. I guess I just like noise, and a lot of it.

I was also impressed with the lead singer, who disrobed during the show, ending up in his underwear. He seemed to be in some sort of ecstatic trance, and would leap off the stage every so often, and just plummet off it now and then, taking part of the sound system with him and causing tech guys to scramble out from wherever they usually are to pick up scattered amps. MC Gringo Blingo then danced in the audience, some of whom attempted to dance with him; he ignored them, and also ignored Coco, who had similarly been exploring the rum and was now standing on one end of the stage, shouting at the performer to take the rest of his clothes off.

I suspect Michele Bachmann would have hated everything about this show. But, then, I’m guessing she can’t make a decent martini, either.

Ketel One at a City Pages party; rum at the Seventh Street Entry