I am not in Minneapolis just now. I am in Omaha, Neb., a place that popular culture seems confused by.  Bob Seger once sang of it “On a long and lonesome highway East of Omaha,” and that’s about as close as anybody wants to get. The Counting Crows could scarcely be bothered to look it up on a map, even when they named a song after the town. Where is Omaha? “Somewhere in middle America,” according to Adam Duritz. Groucho Marx tried to be more specific, and failed, singing, “There’s a place called Omaha, Nebraska, in the foothills of Tennessee.” In fairness, he was only off by 944 miles.

So what am I doing in this Bermuda Triangle of the Midwest? I am attending a theater conference — The Great Plains Theatre Conference, specifically. So I am surrounded with actors and directors and playwrights, and that can mean only one thing.

There may be no more superstitious group. Theater people genuinely are like the sorts of paternal descriptions anthropology textbooks used to offer up of indigenous tribes from some overlooked corner of the world, who have managed to avoid such modern advances as light switches, telephones and Shake Weights: They are a primitive and easily frightened group, given to gathering in small groups and worriedly discussing the occult world that surrounds them, offering suggestions for amulets and counterspells that can protect them against the supernatural. Don’t believe me? The Guthrie Theater was once exorcised. In 1994.

While I am usually annoyed by this sort of woo woo — it crops up in discussion of science and politics far too often — I actually think a hint of the occult is good for the arts. And so I listen with pleasure to stories of hauntings here on the Fort Omaha campus, where the conference is taking place. It’s an old military fort, dating back to 1868, and has the unusual distinction of being America’s first military balloon school, which is rather badly named, calling to mind images of Civil War generals creating balloon animals as excited troops look on and applaud. But is there an old military fort that isn’t haunted? I suspect not. And so we hear of pale girls who wander through the barracks at night, wordlessly seeking lost family members who have been dead for a century. I have yet to see this spectral child. If I catch her in the gift bag of candy that the conference gave me, I shall perform an exorcism of my own. 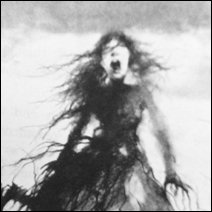 MinnPost photo by Max Sparber
Detail of an illustration by Stephen Gammell for “Scary Stories to Tell in the Dark.”

But I am not here to write about Omaha. No, I brought two books from Minnesota with me, both appropriately spooky, that I wish to introduce you to. I will start with a children’s book that I suspect, if you’re of a certain age, you may already be familiar with, and might have left you quite unhappy as a child. It is called “Scary Stories to Tell in the Dark,” and was authored by Alvin Schwartz in 1981. Schwartz was both a fan and a scholar of children’s folklore and urban legends, and collected and published them. This is the first of three books retelling the sorts of spooky tales kids tell each other when they are at a sleepover together, or gathered around a campfire, or, this being the 21st century, chatting on Facebook, I presume.

The stories themselves are fun — a lot of them are slow builds, of shambling creatures slowly approaching a hapless victim, and you, the story’s teller, are supposed to lurch for a listener at the climax, with the only goal being to recreate on the cheap that moment in films when something jumps out directly at the camera to make the audience members fling their popcorn in the air with terror. But it wasn’t the stories that really made the book famous, not among my friends. And it wasn’t the stories that made the book Minnesotan — Schwartz was a lifetime resident of New Jersey.

No, it was the illustrations, by a man named Stephen Gammell, who hailed from Iowa but now lives in St. Paul. I cannot be sure how Gammell created his illustrations — they look to be pencil, but often quite smudged out. But they have a terrifically disturbing quality to them — they all seem to be vaguely decomposed, even the living figures. All have features distorted, as though by the rictus of rigor mortis. If there is a fabric in a Gammell drawing, it will be battered, frayed and threadbare. Faces are often eyeless, or the eyes are rolled up. Images are often bathed in shadow, and the figures seem to be bleeding into the shadow, as though the shadow were pouring out of them, or, worse, into them. Limbs turn inward, mouths stretch outward, fingers twist into claws, and heads are often too large, inflated like a balloon.

This was a troubling book to a lot of people. Between 1990 and 1999, it was the most challenged book in school libraries, and the seventh most challenged between 2000 and 2009. I honestly think it was Gammell’s illustrations that caused a lot of the upset. I may be wrong, but it’s worth noting that a reissue of the books has been announced — with new illustrations by another illustrator.

The Twin Cities are a pretty literary town, but there are a few genres we tend toward. There are a lot of poets in this town. For some reason, we have more than our share of mystery writers, but not that many horror authors. I can’t say precisely why this is — perhaps something about our temperament causes us to prefer our bloodshedding to be human in origin. But when you’re staying in a haunted military fort, you don’t necessarily wish to read about a scrappy female detective whose Thanksgiving with her Norwegian parents is interrupted by the ax murder of neighbors Don and Tillie Olsen. No, you want spooks. 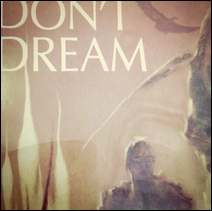 I am reading “Don’t Dream” by Donald Wandrei, a Minnesotan who was a contemporary of H.P. Lovecraft and touched on some of the cosmic themes Lovecraft explored — in fact, with a Wisconsin horror writer with the suitably Lovecraftian name August Derleth, Wandrei cofounded the Arkham House publishing company, which kept Lovecraft’s work in print. This story is a saga in and of itself, and I don’t have the space to detail it, but I may return to it.

For now, I wish to celebrate Wandrei, not celebrate his celebration of Lovecraft. He was certainly a minor author in the canon of contemporary horror, but pleasurably so. Lovecraft expanded the language of horror to include a cosmic component; his was not a world beset by ghosts or werewolves, but haunted by ancient and sleeping gods from twisted dimensions whose waking would spell the end of the earth. The knowledge of this could, and did, drive men insane. But Lovecraft’s contributions are frequently undermined by his idiosyncratic use of language — he often seems to be in a self-created competition with Edgar Allen Poe as to who can create the most tongue-twisting sentence with the greatest amount of gadzookery and thesaurus-raiding. Additionally, Lovecraft was a bit of a crank, and wrote xenophobia into his stories that is as disturbing to modern readers as the horrors he conceived.

Wandrei has a cosmic sensibility, but wrapped into more traditional horror stories. His tale “When the Fire Creatures Came,” as an example, has a meteorite creating some sort of atmospheric disturbance that causes anyone who ventures outdoors to spontaneously catch fire. There’s an elder god connection here, but the real pleasure of the story is a more quotidian, ground-level view of a Roland Emmerich-style apocalypse. “Uneasy Lie the Drowned” is a still-more traditional ghost story, but a darned effective one, in which a man in a canoe suddenly notices a pair of hands have risen from the waters and seized the side of the boat.

He was published in pulps, and so Wandrei was often pulpy, but there is real pleasure in that — where else are you going to find a creature named Fthaggua, Lord of Ktynga, who, as it happens, is a fire vampire. And Wandrei shares Lovecraft’s suspicions about foreigners, but while Lovecraft funneled it into stories of New England towns that had been taken over by monstrous ethnic types, Wandrei simply presents the outside world as being filled with geographical locations of horror, such as an area in the Congo, described in his story “The Tree Men of M’Bwa,” where some unfathomable horror seizes travelers, lops off their legs, and plants them in the ground, where they grow.

I’d share these stories with my fellow theater professionals, but, frankly, they’re still scared by Ouija boards. This sort of horror may be too advanced for them.

Midwestern horrors: The illustrations of Stephen Gammell and the stories of Donald Wandrei