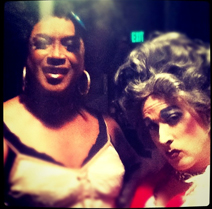 Gender is a funny thing, isn’t it? Men are supposed to be from Mars and women from Venus, but, through some cosmic trick, the two alien races manage to resemble each other so much that they can be mistaken for each other and can surgically swap back and forth. And that’s not even counting those who were born with attributes of both sexes, who really should be counted. The genders are more alike than they are different, and while the French say “vive la différence,” sometimes I honestly think we make too much of a fuss about it. We live in a puzzling world of sexual balkanization, where the genders are treated as though they speak their own languages, have their own customs, and can barely comprehend each other, and it’s biology at fault.

So thank goodness for performers like David Hanbury, who has created the character Mrs. Smith and is currently performing at Bryant-Lake Bowl. I’ve mentioned Mrs. Smith before, but here is a quick reminder: Hanbury’s character is an older Boston dowager driven frenetic by the loss of her cat. Hanbury likes to use this simple premise to push his character into increasingly unlikely circumstances. Mrs. Smith was haunted by poltergeists recently, and later threw a fundraiser to help others who had likewise lost cats, which caused her such paroxysms of maniacal grief that she destroyed her own event.

Now Hanbury has placed Mrs. Smith in the least likely circumstance yet: smack dab in the middle of a 1970s women-in-prison film. The title of the play is a bit saucy, so if you’re easily offended, cover your eyes for the next few sentences. His play is called, in full, “Mrs. Smith & The Sisters Boil in PUSSY PEN: Death-Row Dykes and Luscious Ladies in Lockup!,” which is the sort of title that will either have you lining up to see the show or fleeing it in terror. (Here’s the slightly NSFW trailer if you need further convincing one way or the other.)

It’s an odd genre he’s satirizing, one that found its apex with 1974’s “Caged Heat,” which was directed by a very young Jonathan Demme, and found its nadir in 1982’s “10 Violent Women” by St. Paul-born filmmakers (and Mystery Science Theater 3000 favorite Ted V. Mikels.) It’s a short trip from the top to the bottom with this sort of film, though; the two I named are virtually identical. And so Hanbury plucks out the elements that seem to frequently crop up in these sorts of films.

His prison is ruled with an iron fist in a silk glove, so to speak, in the form of a female warden whose sadomasochism has her resembling a dominatrix more than a law-enforcement official. The prisoners are a collection of lesbians and men playing lesbians, all eager to fight; one, named Grier, is openly based on Blaxsploitation great Pam Grier, who made her share of prison films. Another female prisoner is, for some reason, based on Jodie Foster in “Nell” — although, if you think about it, without Liam Neeson’s intervention in that film, Foster probably would have wound up in prison.

There’s a plot, sort of, in that the warden is performing unspeakable sex experiments on the prison population, but mostly the play is an excuse to see what happens when Mrs. Smith lands in the middle of one of film’s less appreciated exploitation genres. Hanbury is a tour-de-force performer, and so Mrs. Smith instantaneously takes over, first by redecorating (she hangs Chinese lanterns), then by menacing (it just takes one mention of her lost cat to reveal to the prisoners how dangerously psychotic Mrs. Smith can get), and then by organizing a prison break.

All of this is frequently accompanied by musical numbers, sometimes with Mrs. Smith holding a guitar and playing lightning-fast Jimi Hendrix guitar solos, a skill that is both bewildering for Mrs. Smith to possess and also quite unsurprising.

Aside from its satiric qualities, which are superb, the play itself is a sort of prison break — it’s a production in which gender is just a suggestion, to be adopted or cast off as needed, and anybody can play any gender role, assuming the costume looks sufficiently fabulous or terrifying — this play is satisfied with either. Drag performances have historically tweaked gender assumptions, but Hanbury et al. take it one step further, exploding them. And good riddance, at least for two hours at Bryant-Lake Bowl.

I read a quote from Jerry Lewis recently about women. Lewis is about to retire from hosting his telethon, and it’s probably time. The man has far outlived his era, and while his work deserves attention, his mouth should probably be ignored. And so it was that he said, in essence, that he didn’t think it is proper for women to do comedy, because he respect them too much to imagine them with their hands under their arms, making flatulent noises with their armpits.

That’s a pretty limited view of comedy, although, in fairness to Lewis, it is what an awful lot of contemporary cinematic comedies insist of their actors, along with a dose or two of homosexual panic. Lewis is right — it’s not very becoming for women to do this sort of joke. It’s not very becoming for men to do it either. But humor is not about dignity, and women can be just as skilled at dropping their dignity as men. 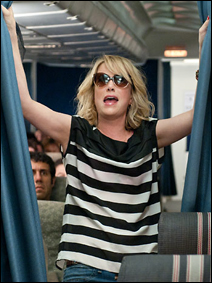 Case in point: “Bridesmaids,” which is a sort of distaff version of juvenile but very funny comedies that producer and director Judd Apatow has been turning out for the past few years (he produced this one). It has all of the Apatow signatures, including one of the best qualities he brings to his films: that the comedy comes necessarily from the little heartbreaks and jealousies of friendship. Kristin Wiig gets a lot of credit for this in “Bridesmaids” — she cowrote the film and stars in it, and she has long been one of the most engaging talents to come out of “Saturday Night Live.” However, Hollywood never seems to know what to do with a funny woman, so she has been relegated mostly to a series of supporting roles as girlfriends or snippy professional women. She does both well, but she’s a genuine comic star, and needed a vehicle to demonstrate it.

She’s given herself one. She plays a 30-something in the middle of a private meltdown, unfortunately timed to coincide with her best friend’s wedding, and as a result Wiig’s contributions to the wedding are pandemonium. There’s very little of the truly undignified comedy that Lewis complained about — just one scene of pure scatology. But Wiig’s character experiences chronic humiliation, mostly caused by her own jealousies and insecurities. She’s dazzling in the role, and has surrounded herself with a spectacular group of supporting players, including Maya Rudolph as her best friend, the bride. The two have an improvisational affection for each other that feels genuine. One can see why Wiig might get a little bonkers if that friendship is threatened.

Alas, the film is being pitched as a “chick flick,” and is set in a world that is as devoid of genuine male agency as Apatow’s films are usually devoid of female agency. And while it’s a pleasant change of pace to see a movie in which the lone significant male character is stuck in the boyfriend role, this is a film that can easily be enjoyed by anybody of any gender. America does not need two separate categories of comedy, one for women, one for men. We are not the sexual Balkans.

Mrs. Smith at Bryant-Lake Bowl, and ‘Bridesmaids’ on screen