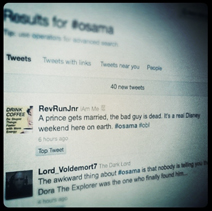 It’s been quite a weekend, hasn’t it? This is the sort of moment that can leave an art critic, and, by extension, the arts community, seeming woefully out of touch with the rest of the world. How do you start your column the day after Osama bin Laden was killed by helicopter-borne Navy SEALS? Do you just launch into a review of “Fast Five,” which I saw this weekend and, by the way, rather liked?

Well, the arts are not so terribly disconnected from the world around it. With some art, it’s going to be a bit hard to respond instantly; after all, theater takes months or years to produce, as does film and literature. Paintings take days. A dance cycle? Forget about it!

Music can be a little faster, especially nowadays; there are already quite a few songs on YouTube memorializing bin Laden’s death. As an example, there is a fellow named samlawhorn, who has posted a video of himself singing and playing guitar in the style of a folk song, providing a mockery of the dead man using a dizzying number of rhymes that end with “odd” (“Osama hid out somewhere near Islamabad / But poor bandwidth choked the download of H. and Maude / He went to a mansion to plug in his new iPod”). And of course he has; folk music has a long history of being topical; it was always a sort of daily newspaper for the poor.

TheAdventurous500 provides another guitar-based song, a light, appealing series of bright chords that you could imagine Israel Kamakawiwoʻole singing “Somewhere Over the Rainbow” over. The TheAdventurous sings with a high, sweet tenor, a somewhat profane song of celebration, grinning throughout. “Osama just got shot in the head!” he sings, clearly thrilled by the news.

Rapper yungshaq08 provides his own vaguely arrhythmic, stream-of-consciousness response that sounds as though it was recorded at the exact moment Obama announced the death of bin Laden. “I wanna hear this,” the performer mutters over a cinematic, action-film-soundtrack string section, “I wanna hear what he’s gonna say.” And how does the artist respond to the announcement? “I’m like … ‘quit playing.’ “

I can’t tell if bigntall08’s song is satiric or not. I suspect so. Jeez, I hope so. Dressed in an American flag T-shirt and star-and-stripes headband, the singer strums a guitar and asks us about our precious memories, such as our first kiss. “Well all of those memories don’t matter anymore” he says, and then he and several friends launch into fist-pumping chants of “U.S.A.! U.S.A.!”

A Canadian named cbfiddler1975 provides a word of congratulations from up north, clearly thrilled by the news, before pounding on a piano like Mark Russell and providing a series of rhymes that effectively, and awkwardly, convey his pleasure at the news: “I was in New York on nine-one-one,” he sings, and adds, “I’m Canadian and happy as a clam!”

There was bound to be a dubstep version, and the one provided by DubstepPromoter is pretty straight to the point, consisting of nothing but a thumping dance beat, electronic noises, and a voice telling us, over and over again, that Osama bin Laden is dead. I am not sure precisely who has been waiting for someone to toss the news over a wobble bass to complete their dance party, but I’d like to suggest that there is a corollary to the Internet rule 34, which states that if something exists, there is porn about it. It seems that if something exists, no matter how terrible or bizarre, somebody will try to dance to it. No exceptions.

It’s impressive just how much music has been produced in the 12 hours since the official announcement of bin Laden’s death; a search of YouTube will produce dozens of additional songs that I didn’t link to, some because they were rather monotonous (everybody seems to be rhyming “dead” with “shot in the head,” which seems to be the “June/moon” cliché of the hour), some because their lyrics slipped into Islamophobia and other expressions of contempt, including a fair amount of casual homophobia. (Just a note: bin Laden hated gay people too.) These first responses to yesterday’s news aren’t enormously sophisticated, and some of them are rather crass and obvious acts of gimmicky self-promotion. Nonetheless, I can’t help but enjoy being in a time when something momentous happens and people’s first impulse is to offer up an artistic response to it, however slapped-together.

And they didn’t do much worse than the paid pundits on national television, whose commentary was generally a collection of guesses, clichés, and barely contained celebration. In fact, quite a lot of the public’s punditry was considerably better than what you could find from the mainstream news. If folk music was once the newspaper of the poor, Twitter is the newspaper of the now — after all, it’s where news of bin Laden’s death inadvertently was broken, while it was happening, when a Pakistani neighbor inadvertently live-tweeted the event (“Helicopter hovering above Abbottabad,” he began).

And so it was that millions streamed to Twitter to supplement their news with a communally created, sardonic commentary. Jokes about the need for a “long form” death certificate abounded (I was guilty of one of these, I am afraid.) A fellow named Nick Stern noted that “Only a Democrat would kill bin Laden this far away from an election.” Minnesota’s own Bill Corbett tweeted “How’s it going, Royal Wedding news?” A Tweeter named Matt Warburton opined that this was a “confusing night for racist uncles.”

Some took to Twitter to scold people who were feeling celebratory, and some immediately created spoof accounts for the deceased bin Laden — one account had him as a ghost, commenting from beyond the grave, and one had him the afterworld, commenting from hell. I tweeted that the authors of late-night talk-show monologues were probably watching Twitter and cursing the fact that so much comic commentary was being burned through so quickly. About a dozen people responded and told me the authors were undoubtedly watching the Twitter stream, pencils in hand, looking for material to steal.

But the oldest, and still most popular, creative language of the web is something called the macro, consisting of nothing more than an image with some text superimposed on top of it. Usually, it’s a picture of a cat doing something, but the macro that seems to have gotten the most play in the past 12 hours is an image of Obama in sunglasses, grinning and pointing. “Sorry it took so long to get you a copy of my birth certificate,” the accompanying text reads. “I was too busy killing Osama bin Laden.”