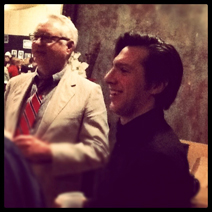 It’s been interesting to chart the career of Joseph Scrimshaw, which I’ve followed for about a decade now. He’s about as much a fixture on the Twin Cities theater scene as anybody, and he’s working just as hard to make a living at it as anybody, but he didn’t come up through the usual channels. He’s not a theater-program graduate who started out doing community theater, got a few gigs at larger places, went through the Playwright’s Center, auditioned at the Guthrie, and spent summers performing in touring productions of educational plays, as a lot of local theater people did. It’s a pretty typical career course, if you can call something that is almost impossible to make money at a “career.”

No, Scrimshaw is the product of a sort of shadow history of Twin Cities theater, and so has had what we will call, for lack of a better term, a shadow career. He’s a product of our comedy community, although he’s never really pursued stand-up. For years, he and his brother Josh had a regular sketch comedy show, which also made a lot of use of improv and, in an experiment that’s never been repeated, novelty dance.

Scrimshaw is also a product of the Fringe Festival, as much as anybody. He’s had a show in pretty much every season of the Minnesota Fringe Festival, and sometimes multiple shows. As a playwright, producer and performer, he’s made extensive use of local cabaret spaces, especially the Bryant-Lake Bowl. He’ll appear every so often in a play at an established theater — last year, as an example, he played Dudley Riggs in a play about the man at the History Theater. But, for the most part, Scrimshaw’s career has run parallel to mainstream Minnesota theater. 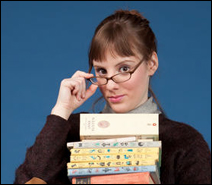 He’s been laboring for a few years now, with his wife and producing partner Sara Stevenson Scrimshaw, to have his own theater company, Joking Envelope. As a result, he has given himself the herculean task of authoring or co-authoring enough material to have an entire season of plays. He’s got one going on right now, called “Sexy Librarian,” that’s playing at the Minneapolis Theater Garage. And it is, like a lot of his plays, quippy and fine and likable. Like a lot of his plays, the set doesn’t feel designed so much as discovered, like it was assembled out of furniture you might find left out on the side of a road. In this case, the stage is loaded with crappy bookshelves filled with battered books, along with an old computer that you might find at a thrift store.

And, like a lot of his plays, he’s filled out the cast with some enormously appealing comic actors. Often Scrimshaw stars in his own shows, but in this case the lead performer is an actress named Anna Sundberg, who plays a small-town librarian whose interaction with her spectacularly dense patrons consists almost entirely of sarcastic retorts. Sundberg plays her character with a snarl and a stooped posture, as though the act of tending to the literary needs of morons has caused her to grow prematurely aged.

Underneath Scrimshaw’s writing, there is often a kernel of heartbreak, and here it comes from the librarian’s knowledge that we have been lied to, all of us. We have been told that you just need to be yourself and somebody will love you. But with her mousy features and wardrobe of mustard and drab yellow clothes, nobody looks twice at her. Nobody, that is, except her boss, himself a mousy man in drab yellows, played by Sam Landman, who has lost the use of his hands due to years of restocking shelves. And though he has a desperate, obvious crush on her, she chooses to ignore him, as she’s not attracted to him.

In a plot twist that might have come out of a live-action Disney film from the ’70s, she finds  magic spell in the library’s attic that allows her to do what librarians don’t do in ’70s Disney films, but instead do in 1970s adult films: She unties her hair, takes off her glasses, and reveals herself to be a sexpot. She immediately rushes to the home of the town’s only beefcake, played by Mike Rylander, who is unaccountably single. Scrimshaw has written this character as a cliché, which he then attempts to take back. The beefcake is dim, and he’s given the sort of stage action dim characters get, in which he tries and fails to use big words, and tries to behave cleverly and fails. Some of this, to Scrimshaw’s credit, is quite funny — Rylander has a scene in which he has planned to handcuff himself to the library, but, when putting the handcuffs on, neglected to actually attach himself to anything. He attempts to fix this by slowly reaching for the edge of a desk in an effort to hook himself onto it, a gesture that self-evidently will not work, and the rest of the cast call out to him to stop it. They all seem a little depressed by this gesture, Rylander as much as anybody.

But Scrimshaw also gives Rylander’s character a degree of self-awareness, and an earnest desire to communicate, and Scrimshaw similarly tries to make all of his character something more than the sitcom types he has established for them. Sundberg’s character isn’t so much an ugly duckling as a confused and socially ill-adjusted young woman, and the moment she gets pretty she becomes a shallow lech. Landman tries the magic spell at one point, and turns into a wildly gesticulating bully. Nobody is great shakes to start out with, and nobody is improved by magic. There are secondary plots that arise, the sorts of things that are resolved with a phone call in a sitcom, and they are left unresolved. “Sexy Librarian” closes with the same song it opened with, and it’s a despairing piece of music, with Sundberg in circumstances very similar to those at the start of the play. The only message of the play seems to be that magic fixes nothing, and that sometimes love is not the answer. This is a radical rejection of the sort of story “Sexy Librarian” seemed like it would turn into, but I guess if you have a shadow career in theater, you end up telling shadow tales. They resemble stories you might hear elsewhere, but only superficially.

I just mentioned a song, didn’t I? “Sexy Librarian” is a musical, of sorts. There is a live band onstage, with the guitar player, Adam Whisner, acting as narrator (and Scrimshaw himself drumming). The music is noisy proto-punk rock and roll by Mike Hallenbeck, overamplified so that the lyrics can be hard to understand, and it’s a bit hard for me to put my finger on just why this play is a musical. Scrimshaw has worked within genres before, but usually he parodies them. Not here. People simply sing. And the songs function in the way songs do in a traditional musical, coming in at the moment when emotions overwhelm the characters and they must sing — but none of the characters really seems like they would bust out with Iggy and the Stooges at these moments. It doesn’t work, precisely, but neither does it … not work. At its best, it’s not a distraction from the main action of the play, but at no point did this story feel like it needed to be a musical.

But, then, does anything ever actually need to be a musical? Scrimshaw might have added songs to this because he thought it would be fun, and it often is, and because he thought it would be funny, and it often is. Scrimshaw isn’t a product of the Twin Cities musical theater community. His background is in comedy. And if he thinks that it might be funny if somebody starts singing, that’s an impulse he should follow. He’ll get it exactly right eventually, and I’d be curious to see what a shadow musical looks like.

A shadow career in theater: Joseph Scrimshaw and ‘Sexy Librarian’