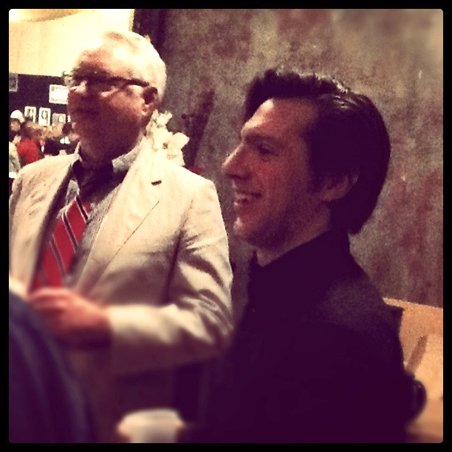 This past week, news of Tom Poole spread the way news spreads nowadays — Tweets, and Facebook updates, and, eventually, a few news stories. Poole is a local playwright, one of the founders of Thirst Theater, which performs short pieces in area bars. Poole also runs his own talent service, and as a result of all this he is the sort of person a lot of people in the local theater scene know. I have some passing familiarity with him, having met him a few times as various theater events, as well as working with him briefly during my three-month tenure as editor of “Minnesota Playlist.”

The news that spread was unhappy news. Poole had attended a new piece called “I Like You” by local choreographer Laura Holway. Exiting the theater at about 11 p.m., on his way to the bus, Poole was struck by a car — it’s been widely reported that the vehicle’s lights were off, but according to news reports this is still being investigated. Whatever happened that evening, it left Poole in critical condition, with a fractured skull and “”acute bleeding in several places in the brain.” The last quote comes from a CaringBridge site set up by Poole’s family, where they have been providing regular updates about Poole’s condition. He is, at the moment, stable. He’s also in a coma.

The Twin Cities is not a very large theater community — if you’re routinely active in it, you pretty soon meet almost everybody, and Poole has been active in the community for two or more decades. Poole’s family posted these two bullet points yesterday on their CaringBridge journals:

There is a place on CaringBridge for offering comments. Poole currently has 15 pages of them, comprising more than 200 expressions of concern and well-wishing. Local playwright Bill Corbett, best known for his work on RiffTrax and “Mystery Science Theatre 3000,” has helped set up a fund for donations to go to Poole’s family. “It’s to cover day-to-day stuff,” he told me. “The basics are that a whole bunch of people wanted to help. A situation like this is overwhelming to the family. The fund was set up just to keep the family functioning. This has become the center of their lives right now.”

According to Corbett, the money will be used to make sure the family has basic needs taken care of, such as hiring a cleaner for a couple of weeks to help keep Poole and his wife’s place clean. When you’re tending to a loved one in a hospital, everything is reprioritized — the injured loved one moves up to what Corbett calls the “hierarchy of needs,” with everything else falling below that. This fund will make sure some of the needs that are lower on the hierarchy are taken care of, freeing the family to focus on their primary concern, Tom Poole.

Corbett has known Poole for about 21 years. Both are transplants, and Corbett appreciates that. “He’s an Arkansas transplant, and it never left his voice,” Corbett told me. “Poole is smart, well-read, sardonic, writes crazy, smart, hilarious plays. He’s a great host and a great cook.”

In fact, the last time I saw Poole was with Bill Corbett at a play by Joseph Scrimshaw — both have written for, or with, Scrimshaw in the past few years. I asked Scrimshaw for a few comments regarding Poole, and he emailed me this:

“I’ve been very lucky to get to know Tom as a human being and as a creator/lover of comedy. One of the first times I met him was at Thirst Theater. He was drinking a huge martini and laughing at his own play. It was understandable, as the play was hilarious.

“I’m ashamed as a writer that I have nothing but clichés to say about Tom Poole, human being. He is a truly kind, supportive, fun-loving and honest man.

“As a comedian, he’s inspiring.  I’ve co-written two plays with Tom, and my theater company, Joking Envelope, produced his play ‘Safe As Houses.’

“For publicity reasons, it’s always easiest to describe Tom’s plays as ‘dark comedies.’ It’s more accurate to say Tom’s plays are ‘honest comedies, but most people don’t like to deal with the horror of reality.’ To me, Tom’s viewpoint, as a comedian and a human being, is the essence of comedy. He mines difficult, dark subject matter and by laughing at it, he finds and shares the joy in it.

“So it’s both horrifying and comforting for me to think of him in such a dark condition and wonder what jokes and what joy he would find in it. For now, I keep thinking of a line from ‘Safe As Houses.’ It was a line I got to deliver as an actor. One of my favorite lines ever. Some people didn’t get it. Tom and I once had a joyful conversation describing the myriad of mini jokes in this simple line: ‘I believe it was Mark Trail who said the reports of my death are f—ing wrong.’ “

About Tom Poole: The Twin Cities theater community bands together in support of an injured playwright