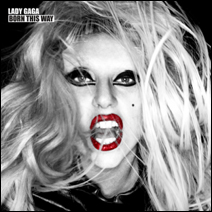 I would like to talk about Lady Gaga, although everybody, just now, is talking about Lady Gaga. It seems they have been for a few years now, because she’s endlessly connected to one aesthetic outrage or another: a dress made from meat; a series of startling videos; a public fallout with Target over its support for anti-gay politicians. It is as though Lady Gaga’s real genius is for living a life that easily converts itself into a series of spectacular press releases.

And this is what I would like to discuss. Lady Gaga has a new album out just now, but it doesn’t interest me enough to review it, except to say that she makes competent dance music, and to spend a paragraph or two noting a few details. I was one of the purchasers who spent $1 million on Lady Gaga’s newest album, “Born This Way,” and I gave it a few solid listens and probably won’t again. I appreciate its production value — all of her songs make exceptionally good use of something called “separation,” in which every instrument and voice is given its own sonic space, in part by its placement left or right on the stereo spectrum, in part by trimming the highs and lows of a sound so that it inhabits its own frequency, and in part by highlighting — or even distorting — a sound to emphasize its uniqueness.

Lady Gaga’s producers do this to such an extent that her songs sound less as though they were mixed as that they were remixed, like her songs are a collage culled from a hundred different recordings and a hundred different recording styles. This isn’t an uncommon approach to making music, but it especially jumped out at me on Gaga’s album, and I think it’s an example of how the jury-rigged art of innovators eventually goes mainstream. In this case, the source is the baldly combined — and often appropriated — sounds of early hip-hop, which really did mix together a variety of tracks from a variety of sources. In the ’80s, it was pretty rare to find a sound engineer who would deliberately do this; music was intended to sound as though it was created by a group of people who were all playing in the same room at the same moment. Now, music is supposed to sound assembled.

Gaga flirts with religion a lot on this album. I say “flirts,” because she’s a songwriter with a taste for an unexpected turn of phrase (“disco stick” may be her permanent contribution to the English language) and nervy themes, but she’s more an author of single-phrase anthems than a philosopher converting a sophisticated worldview into the epigrammic language of the pop song. She seems to be trying to reclaim the language and symbols of Christianity to support her longstanding dedication to near-absolute inclusively.

In her past few albums, she has recast the dance floor as a revolutionary spectacle, where anybody is welcome, and outsiders are especially entreated to participate. Now she expands this to include the Biblical pantheon, who look down upon the discotheque with approval.

“It doesn’t matter if you love him or capital H-I-M,” Gaga sings on her ode to gay acceptance, “Born this Way.” Even Judas has a place in Gaga’s world, declaring herself in love with him, and a holy fool, in a song named after Christ’s betrayer. All of it is expressed through short, punchy lyrics; it’s the theology of the pop song, and so if you’re looking for an in-depth radical re-evaluation of Christianity, you’re going to have to look elsewhere.

Nonetheless, it points out Gaga’s remarkable skill at self-promotion. She’s not a superstar because she’s producing the most interesting music out there — in fact, but for its eclectic mixes and occasional bursts of Mediterranian-sounding minor motifs — you might mistake her for any number of theatrical dance music performers, from T’pau’s Carol Decker to Bonnie Tyler. No, Gaga gets the press because of her commitment to spectacle. She’s often mentioned in the same breath as Madonna, and there is no denying that Gaga seems to have performed a postmortem on Madonna’s career for pointers on her own.

But Gaga is also an heir to Grace Jones, from whom Gaga seems to borrow her high-fashion-meets-sexual-underworld taste in wardrobe, and seems to have gotten many of her ideas for her music videos from art filmmakers such as Matthew Barney and Eve Sussman. I had long thought that the dominant art form of this century was to be collage, and with Lady Gaga, we find an artist who sometimes seems like nothing but; everything about her seems like a remix.

I can’t say whether she does this primarily for the sake of outrage or for the sake of revolution. The cynic would look at her as an appropriation artist — she rarely credits her sources, except with Madonna, whose influence on the song “Born the Way” is unavoidable. Gaga actually contacted Madonna and got her seal of approval on the song, which strikes me as a clever way of circumventing criticism. Of course she sounds like Madonna — even Madonna knows this, and approves!

But Gaga doesn’t seem to have done the same with Grace Jones, or Matthew Barney, or Eve Sussman. Now, there is nothing wrong with appropriation — in fact, appropriation is widely used in modern and contemporary art, with artists like Sherrie Levine, who once rephotographed a series of photos by Walker Evans out of a catalog of his work, and then exhibited that. However, Levine titled the show “After Walker Evans,” and much of the tension of appropriation art is knowing the source of the original, and asking what it means when another artist makes use of these images.

When Gaga borrows, she doesn’t seem especially concerned with crediting her sources, and that deflates the tension. In these instances, she seems less like an appropriation artist and more like a plagiarist, ransacking 20th-century underground art to create a spectacle that functions, mostly, to make her famous. Gaga keeps telling her audience that they are all superstars, but they aren’t; she is. Radical inclusivity is only meaningful when you’re actually including somebody, rather than simply claiming they are included but then going off to your own little club.

Many of the promotional techniques Gaga uses aren’t especially new, and now, with the Internet, a lot of them are available to anybody, but Gaga has yet to write a pop song encouraging her fans to issue their own press releases. And there are a lot of artists out there creating bold, astonishing new works of art, some of which Gaga borrows from for her own spectacles, but she doesn’t seem to be doing much to direct some of the attention coming her way back to them, even though some of them really should be superstars. At the very least, they could probably do with some credit.

I imagine this is why some people get suspicious when Gaga sings about religion, or homosexuality, or other hot-button subjects. It’s pretty easy to flame the flames of controversy to attract attention to yourself, but these subjects don’t benefit from being used primarily as mechanism for self-promotion. I don’t believe any of this is just lip-service on Gaga’s part, but it is possible to take anything she does — including her break from Target of gay rights issues — as being nothing more than extremely crafty promotional decisions. And her public stance in support of gay rights is commendable, and I think heartfelt; it would be a pity to undermine that with the sense that it’s a front for self-promotion.

Ultimately, I guess it comes down to a question of what it is Gaga is promoting — herself, her art, or her message. And because her art is far from transformative and her message isn’t clearly expressed, she really does seem primarily in it to get her name out in public — heck, she’ll often just call out “Gaga” during a song, and she’s given to pronouncements like, “I am a master of the art of fame.” And that’s all well and good on its own — everybody seems to crave fame nowadays, and I won’t kick Lady Gaga for sharing that desire and fascination. But there gets to be a point when it becomes important to demonstrate just why you’re a superstar — for the sake of more stardom, or for something else.