“Hobo With a Shotgun” is a marvelous name for a film. It’s not just a title, it’s a mission statement, an expression of artistic and aesthetic intent. In Hollywood, they have something they call a log line, which consists of a brief description of a plot and a film’s emotional hook. This is that, too. What is the story? A hobo gets a shotgun. And what is the hook, the selling point, the thing that will make audiences want to see the film? It has a hobo in it with a shotgun. 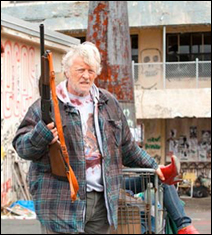 Courtesy of Alliance Films
Rutger Hauer in “Hobo With a Shotgun”

The film is the second to result from “Grindhouse,” a prankish one-off from directors Robert Rodriguez and Quentin Tarantino, in which they revisited the sort of exploitation fare that used to populate former burlesque theaters on 42nd Street in New York. They each provided a film — a zombie pastiche from Rodriguez called “Planet Terror” and a psychopath in a muscle car story from Tarantino called “Death Proof.” To make the double-bill feel more like a genuine grindhouse experience, they enlisted friends to make a series of trailers for non-existent films to play before and between the movies.

Last year, the first of those trailers became an actual movie. The film was called “Machete,” and starred Danny Trejo as a former Federale who has started fighting for the rights of undocumented workers in southern Texas. The film was scripted by Rodriguez, who had wanted to make a movie like this for years, so it’s not much of a surprise that it actually got made. But the journey of “Hobo With a Shotgun” to the screen was somewhat unusual. It’s creator, a Canadian named Jason Eisener, wasn’t invited to make it for “Grindhouse”; instead, he created it for a competition associated with the film, and won, and so his trailer was shown in some screenings of the film in Canada. And that should have been it — here’s the completely not safe for work trailer, and it’s impossible to imagine creating a full-length film from it.

But Eisener has, and what a film! Despite its pedigree, “Hobo” has less to do with the exploitation fare of the ’70s and everything to do with the sort of campy direct-to-video films that companies like Troma and Full Moon Productions churned out in the ’80s and ’90s. Superficially, it is a sort of Charles Bronson film, yes — it’s set in a world in which the criminals have taken over, and run rampant, and the only cure for it is a lone vigilante with a very big gun. But Bronson’s films were grim, humorless affairs. “Hobo,” in the meanwhile, is a comedy.

It may seem odd to describe it that way — after all, it’s a genuinely gruelling film, filled with outrageous bloodletting. But all of it is in service to a maniacal sense of humor — hardly a surprise to people familiar with Eisener’s work. After all, his previous effort was a short called “Treevenge,” which looked at Christmas through the eyes of the season’s trees, for whom it is a massacre, and who one day get even. The film is also available on YouTube, and also shouldn’t be watched at work.

So everything in “Hobo” is huge and satiric. The villains scream every line of dialogue, and, in an odd nod to the film’s Canadian origins, drive around ridiculous Canadian DeLorean lookalikes from the ’70s called Bricklins, which TIME Magazine declared one of the 50 worst cars of all time. But what else would bad men drive? The two primary villains are sneering yuppie punks, sons to a white-suited mob boss whose headquarters is a sort of ghastly funhouse of murder (one scene takes place in front of three topless women with baseball bats, beating on a man strung from the ceiling like a pinata). There really are no words from cinema to describe just how demented this film’s conception of evil is; we have to look to the fine arts. “Hobo’s” horrors are like something Hieronymus Bosch might have filmed, if he had a camera and a tank of nitrous oxide.

The film’s hobo is played by Rutger Hauer, an actor who, when he was younger, had a supermodel’s good looks and, as a result, often played murderous characters who seemed as though they had just walked off the catwalk to engage in bloodletting, and were due back to model something by Gaultier. He’s aged into a character actor, and, as a result, Hollywood hasn’t been sure what to do with him. I’m not clear how he became involved in this production, but he’s perfect for it — he delivers the film’s outrageous dialogue with a credible snarl, never betraying any awareness that everything he does and says is ridiculous. Hauer is an exceptional screen presence, and deserves memorable roles. Perhaps this is the start of a new stage in his career. Hell, I could imagine him making dozens of sequels to “Hobo,” and finding a devoted audience for each one. I’d be there.

There’s another movie out now that’s not quite what it seems, called “The Trip.” First of all, it’s not a movie, but an edited version of a six-episode BBC sitcom. Secondly, it’s not a sitcom. 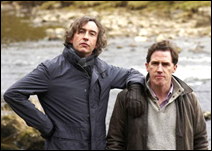 First, let me say that it works as a movie — quite well, in fact, thanks to the fact that it is Michael Winterbottom at the helm, and Winterbottom is an extraordinary director. Secondly, the film is quite funny, thanks to the fact that it stars Steve Coogan and Rob Brydon, playing fictionalized versions of themselves, and both are exceptionally funny people. They improvised a lot of their dialogue, and they’ve worked together long enough that they can catch and elaborate on each other’s comic ideas — whenever the two just start to go off on one of these improvisations, Winterbottom stays with them, and hilarity follows.

But the film tells of two men who are touring the restaurants of Northern England together for a magazine article, and both men are in quiet, but constant, competition with each other. This competition plays out in small ways — they will try to best each other with impressions, which both are quite skilled at. And it plays out in odd ways, such as Brydon secretly memorizing the work of poets who lived along their route, so that he can recite their work at seemingly impromptu moments, like he just happens to know Cooleridge. And the competition sometimes spills over into genuine viciousness between the two men, a viciousness made even meaner because it is always rooted in jealousy, and therefore always tries to undercut what each man does well. Especially for Coogan, this results in a portrait of a man whose personal failings are exacerbated by professional frustrations, leaving him, as a result, very lonely and often quite mean. But how do you market something like that? Come for the Michael Caine impressions, stay for the incisive look into a man’s corroding soul?

No, unless you have a hobo with a shotgun, it’s easier just to market something a comedy and leave it at that.

The violent and the cruel: ‘Hobo with a Shotgun’ and ‘The Trip’