Some weekend recommendations. Firstly, tonight Take-Up Productions ends its series of pirate films with what must be the ur-text of cinematic swashbucklers, 1926’s “The Black Pirate.” The film stars Douglas Fairbanks, who also co-scripted, and not only have pirate films borrowed this one’s daring stuntwork (Captain Jack Sparrow, in particular, owes a debt to Fairbanks), but later filmmakers actually lifted scenes from this film outright, splicing them into their own movies.

For those who haven’t watched a Fairbanks film before, the actor is a bit unexpected — he looks less like an action hero than somebody’s dashing uncle, and he totters around on what seem to be teeny, tiny feet. But he possessed a daring athleticism that still sets the standard, and it’s on full display here. Additionally, parts of the film were shot using a primitive coloring system, and this gives some of the more eye-popping scenes — such as an army of pirates swimming underwater — an accidental surrealism. Best still, when the Trylon plays silent films, they often have live musical accompaniment, a rare pleasure these days. Tonight, the music will be provided by the Poor Nobody’s. 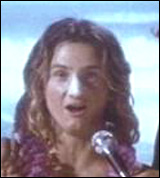 Speaking of films and music, Saturday at 11:30 p.m. the Riverview Theater will present “Fast Times at Ridgemont High,” which contains a score of ’80s hits that now seems epochal. It’s not quite new wave, if you’re going to be particular, but instead a sort of punkish Hollywood pop, featuring the likes of the Go-Go’s, Oingo Boingo, Joe Walsh and Don Henley. Additionally, the film makes extensive use of Jackson Browne’s “Somebody’s Baby,” a solid, angsty pop song about fretting over a girl who is so attractive that she certainly already must be dating. The director, Amy Hecklerling, used the song as an unexpectedly poignant counterpoint to a series of disastrous romantic encounters experienced by one of the film’s characters, Stacy, played by Jennifer Jason Leigh, who still looked about 16 when the film was made.

Stacy’s story remains one of the most daring presentations of young romance ever put onscreen. It’s awkward and graphic and eventually results in Stacy’s decision to terminate a pregnancy, which would never again be handled as straightforwardly as this film does. Some of the credit for this goes to the source material — screenwriter Cameron Crowe had returned, undercover, to high school, eventually writing a book about the school year he witnessed, which he adapted to the screen without changing much.

The film is also worth watching for the astonishing talent Heckerling collected, many of them in their first film appearances, including Forest Whitaker, Eric Stolz, Judge Reinhold, Nicolas Cage, and, in a role that threatened to define him, Sean Penn as the cheerfully stoned surfer Jeff Spicoli. If you grew up in the ’80s, you probably quoted lines from “Ridgemont High” the way people nowadays quote “The Big Lebowski,” and Spicoli’s character, with his Valley accent and beach slang, was responsible for most of it. In fact, to this day, if you hear somebody doing a surfer impersonation, they’re probably doing some variation of Spicoli.

For those of you in the mood for some fine art, check out the Burnet Art Gallery in the Graves Hotel in downtown Minneapolis, which has an entertainingly minimal collection of work by Alexa Horochowski called “Cloud Cave.” There aren’t many pieces in this collection, and quite a few of them are stashed away in the gallery’s window, so, as a result, when you walk into the gallery, there is a moment when you’re not sure if there is an exhibit going on or not. There literally only seem to be two images on the walls, both based on photographs taken inside caves. 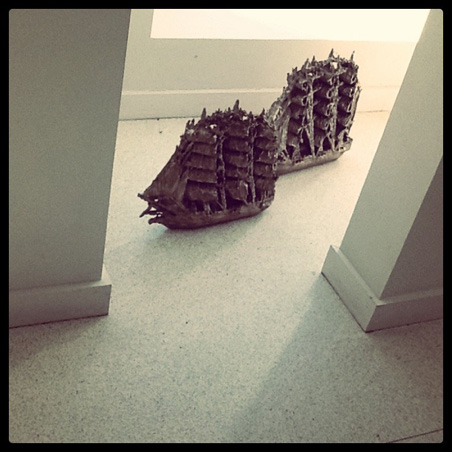 But there’s art there all right, once you start looking. Horochowski describes the show as “suggestive of 15th and 16th century explorers, maps, cave formations and other objects from nature,” and so there is a statue of an explorer in the window, and several marvelous, knee-high sailing ships rounding the window display’s corner and peeking into the gallery. But Horochowski’s world of exploration comes with a cost — a lonely and blackened skull lies in one corner, and, in another window, a neon colored fawn lies, dead.

Some of Horochowski’s pieces have an interesting, melted quality to them, as though they were created by dripping wax atop a statue; in fact, because they are near photographs of the insides of caves, they seem to be formed in the same way a cave produces stalactites and stalagmites, by a gradual dripping of mineralized water over thousand of years. And who knows? Maybe that’s how Horochowski actually made the pieces; I didn’t check her biography to see how old she is.

Of course, I would be remiss if I went without mentioning the Twin Cities Gay Pride parade on Saturday, which has gone from a heroic public declaration of gay identity to a near-universal celebration of it — it’s sort of like the gay St. Patrick’s Day, except, instead of everybody being Irish, everybody is gay, or, at the very least, straight but not narrow, as a popular T-shirt used to say.

And of course we are. Minneapolis is currently the gayest city in America, according to The Advocate, so we’re likely to throw one of the best parties. And we do — there is free music at Loring Park throughout the day, and, if you have a taste for the outrageous, those tastes can be indulged with abandon.