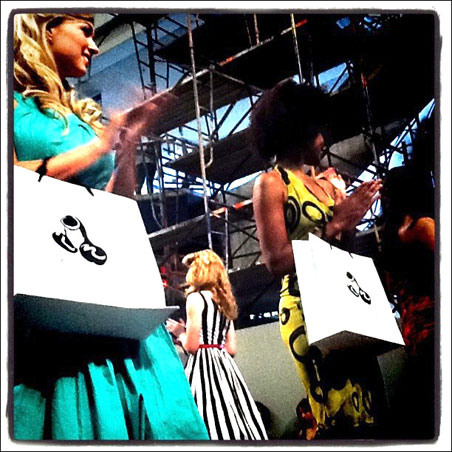 MinnPost photo by Max Sparber
Models in clothes from Bettie Page Clothing at the Mall of America.

I don’t often get to fashion shows, although I would like to go more often. But only if I can be seated next to the runway. As I understand it, that’s the true VIP area, reserved for the likes of Garry Shandling, Stephen Dorff, and Sandra Bernhard, if I remember “Zoolander” correctly. According to the book “How to Becomes Famous in Two Weeks or Less” by Melissa De La Cruz and Karen Robinovitz, those front seats are so coveted that if one becomes abandoned, fashion-show attendees will fight for them, presumably in the way survivors of the apocalypse in Cormac McCarthy’s “The Road” fight over the last remaining bottles of soda or cans of beans.

I think I’ve only been to two fashion shows in my life, and I was in both, sort of. The last was at the History Center’s Retrorama, which began with a regular fashion show and ended with fashion anarchy, as the audience themselves took the stage and strutted their stuff. So, of course, I did too. The only thing better than being in the front row for a fashion show is being on the catwalk.

The other time was for a reality show I was in about five years ago with my girlfriend, Coco, called “Instant Beauty Pageant” and set at the Mall of America. In it, Coco and I were accosted by former  host of “The View” Debbie Matenopoulos, who gave us several hundred dollars and sent us off in search of three new outfits for Coco, which she would then have to model at the end of the show. It was all supposed to look very impromptu, as though Matenopoulos was just seized with the urge to give us money in the MOA elevator; we had, instead, auditioned for the show weeks earlier.

We had originally schemed to just go to Ragstock and buy three ensembles, and then spend the rest of our time sleeping at MinneNapolis, the (sadly now closed) mall store that allowed you to get some shut-eye in one of several theme rooms. Alas, disaster struck. Not only could we not find the three ensembles we wanted at Ragstock, but the other customers seemed annoyed at our film crew. In fairness, the crew consisted of about a dozen people, including a producer, two camerapeople, a gang of PAs who would press release forms into the hands of anybody who accidentally got in the shot, and a wrangler whose job it was to hold the belt of any cameraman who was walking backwards and keep him from crashing into things. The wrangler often did this by just shoving people out of the way, so I can see why it might irritate other customers. Nonetheless, we loved it. We could go wherever we wanted in the very busy mall, at whatever speed (and the producer encouraged us to run about as though we were in a panic), and the film crew would just clear the way. I felt like a tornado, and sometimes I would see other contestants, across the MOA from me, with their own film crew swirling around them like a twister.

We were constitutionally incapable of taking the event seriously. We decided we would scream in terror every time Debbie Matenopoulos accosted us, which she pretended not to notice. We stopped dead on a broken escalator, feigning uncertainty as to how to get off it and pleading for help, much to annoyance of our producer. He wanted us to trash talk the other contestants, but we had barely met them; eventually, the producer told us one of the other contestants had started crying from the stress of the event, so we made fun of that. And, at the end, Coco dressed in her three new ensembles and walked the catwalk, and I cheered for her, and we cast votes for whoever we thought should win. I got confused and voted for the wrong girl, and Coco lost, and we drove home very late at night. We ran into one of the contestants on the way out, also in her car. “We already miss our film crew!” we said. “ME TOO!” she replied.

This past weekend I went to my third fashion show, also at the Mall of America. A new store has opened up there called Bettie Page Clothing, named after the iconic 1950s pinup model. The store features reproductions of the sorts of clothing pinup girls might have worn in the 1950s, and this past Saturday they arranged a fashion show to show off their wares.

The designer is somebody with a single name, Tatyana, and the stuff she sells at Bettie Page’s lies somewhere on the continuum between original ’50s fashions and the sorts of plastic costumes you used to be able to buy for children for Halloween — and the truth is, the closer it is to a costume, the more I like it. You should also be able to buy a little plastic mask with Bettie Page’s face on it, complete with an elastic strap to tie around your head. There are a lot of Twin Cities women who are rather taken with the era and the look represented by Bettie Page — you see them at rockabilly shows and hot rod events, with full-sleeve tattoos based on Vargas paintings, wearing cat’s-eye glasses and hair looped up into waterfalls of 1950s coiffures. If they decide to shop at Bettie Page, the store should do fine. They may, however, decide it’s the pinup version of Hot Topic and stay away, in which case the store may actually do better. You’ll never go broke selling a subculture to the mall crowd.

At the fashion show, The Bettie Page outfits all looked quite good on the models, but, then, garbage bags and hastily arranged bundles of sticks look good on models. It’s why you hire models. Nonetheless, the show presented an appealing selection of clothes, some with USO or WAC inspired themes, some looking like a costume designer’s idea of a female juvenile delinquent from a Nicolas Ray film, and some looking like the sort of thing Wilma Flintstone or Samantha Stevens might have worn on a night out. Very little looked like the sort of thing Bettie Page might have worn — although she is often called a pinup queen, that title properly belongs to Betty Grable, and the store’s merchandise is closer to the sorts of things Grable and her ilk might have modeled in. Page, at her most discreet, wore animal prints, fetishy underwear, and leather. At her least discreet, which was often, she wore nothing at all. She wasn’t pinned up to walls or painted on the fuselages of airplanes so much as her photos were kept in shoeboxes under beds. It wasn’t Betty Grable, after all, that Estes Kefauver dragged before a Senate Subcommittee on Juvenile Delinquency after a young man had died in a bondage-related accident, supposedly inspired by a Page photograph. 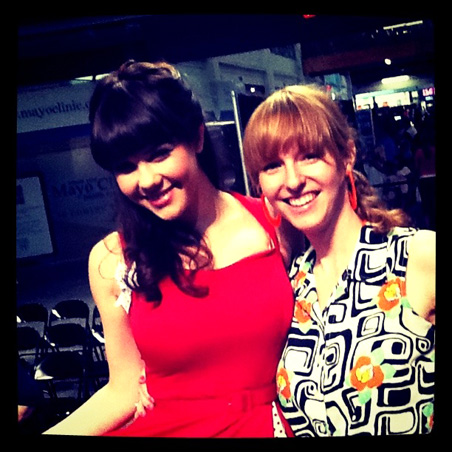 The closest thing on hand to the actual Bettie Page is the store’s spokesmodel, Claire Sinclair, who modeled some of the clothes and then autographed photos. Sinclair is Playboy’s 2011 Playmate of the Year, which probably explains the number of middle-aged men in baseball caps who stood in line to meet her; they didn’t seem like the sorts who would ordinarily malinger around a fashion show. Sinclair is very young, round-faced, with an appealing smile and a practiced friendliness. She chit-chatted with everybody in line as her sister, Angela, arranged photos for her to sign and obligingly took people’s cameras to snap photos of them with Sinclair. Angela has also modeled for Playboy, by the way, but she was in her street clothes and the crowd generally treated her like an assistant. There’s a lesson here, and it is this: Just assume everybody is a Playboy model.

We spoke with Sinclair for a bit while she signed a picture for us — she was going to spend the day hitting thrift shops and wanted to know which ones are good, and somehow intuited that Coco might know. She was right. After all, it was just a few years earlier that Coco had stood on that very catwalk, modeling clothes for a reality TV show. There’s a lesson there as well, one that Sinclair seems already to have learned: Just assume everybody is some sort of a celebrity.

Fashion at the Mall of America: Reality TV, Playboy Playmates, and pinup girls