The Fringe Festival is almost upon us, and when I say it that way, it sounds like the last words somebody declares in a disaster movie. One imagines a stricken look of terror, and then a shadow falls over the city, and then, with a sickening crunch, the Fringe Festival descends, crushing buildings, cars and hapless Minnesotans who didn’t know enough to buy their protective Fringe buttons.

While the festival undeniably consumes the Twin Cities — 168 productions on 18 stages for the week of August 4-14 — the early chaos of the Fringe has been tamed, and so shows typically start on time, and volunteers typically know what they’re doing, and everybody retires to Fringe Central afterward to drink and congratulate themselves on doing a show without killing anybody in the process. The only real risks for patrons and performers are the various tables set up outside the shows, where everybody places postcards for their own Fringe offering. These tables get stacked pretty high with postcards, and I can imagine one spilling over and burying some hapless passer-by, Fringe button or no.

You can’t avoid the postcards. They’re the spam of the festival. With so many performances going on, companies have to get the word out somehow, and so they march up and down lines of audiences waiting to buy tickets, pressing postcards into their hands. Or they lie in wait until after a show is over and leap upon you as you’re leaving a theater. “HI HOWAREYA COME SEE THREE DANCERS AND A JUGGLER EAT FIRE AT THE RARIG THRUST THURSDAY FRIDAY SATURDAY AND SUNDAY,” they shout, pressing cardboard into your hand. You’re left wondering what the heck just assaulted you, and then you look at the postcard. Based on the glossy photo on the front, which shows a corpse dressed up as a character from Shakespeare, this must be some sort of classical theater-zombie film-circus-hip-hop mash-up. But which one? There are so many! 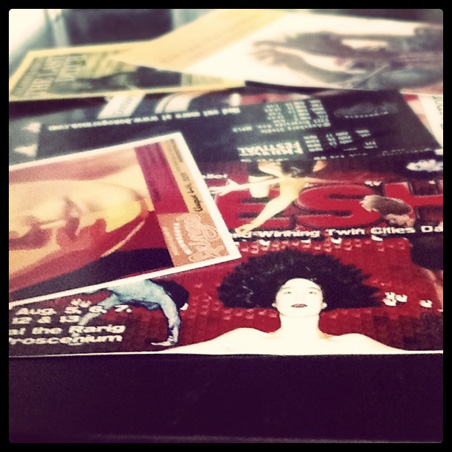 I’m not convinced the postcards actually ever get anybody to go to any shows. But theater people, for the most part, have a sort of cheap grassroots promotional sensibility based in panic. “How are we going to get anybody to see our show?” they ask themselves. So they send out Facebook invites, which immediately go in the trash with the 3,000 other Facebook invites we get every day. And they get their friends to game the Fringe page, so that the first three or four online reviews of their show all read “THE MOST BRILLIANT THING I HAVE SEEN THIS YEAR,” which everybody ignores. And they print up a few hundred postcards and pass them out at every possible event. I don’t know what other people do with them. I let the postcards pile up in my apartment, thinking I will make some sort of use of them, and then throw them out at the end of the week. I make decisions about Fringe shows based on a few simple criteria. Firstly, I go to shows by people I know and trust. Secondly, I go to shows where there is nudity or puppetry. Finally, I go to shows based on conversations I hear in line from other attendees or at Fringe parties afterward.

Oh, and I have one more trick: I attend the Fringe-for-Alls. There was one last night on the Mixed Blood stage, consisting of 30 companies each performing three-minute scenes from their forthcoming plays. It’s a dazzling exercise, sort of like seeing the entire Fringe Festival in a few hours. There is all the passion, all the desperation, and, more than anything, all the weirdness. And make no mistake, the Fringe can be a very, very weird place. The Festival is non-juried, with slots assigned according to chance, so pretty much anybody who applies has as much chance of getting in as anybody else. And so some people who aren’t usually seen on the Twin Cities stage get their chances to shine on like the crazy diamonds they are.

And I can’t complain. I am of the opinion that theater should be an ongoing experiment, and too often it’s a sort of reactionary cauldron in which the era’s current events are turned into a living-room dramas designed explicitly for the purpose of bumming you out. But the Fringe is like an alternate universe, in which theater is mostly made by people who make science-fiction-themed plays. I blame mission statements. Honestly, I do. Theater is made up of a larger number of nerds than you will find just about anywhere, except, perhaps, in the world of IT. But theater’s mission statements all say things like, “Our mission is to educate and inform our community, and to foster conversation, and to blah blah bladdity blah.” If their mission statements said, “Our mission is to boldly go where no theater has gone before,” all American drama would look like the Fringe. I honestly think most people in American theater want to make plays in which Jeff “The Dude” Lebowski fights Sleestacks, but are held back by theater mission statements.

And so, just as a sampling, last night’s Fringe preview offered a scene from a musical based on the 1986 film “Highlander,” in which Christopher Lambert battles immortals with a sword in a plot that demands everybody decapitate one another. There was something called “YARRRRH! The Lusty, Busty Pirate Musical!” which was precisely what it sounded like. There was yet another musical called “History Camp,” which seems to be a combination historical adventure (its cast includes Joan of Arc and Amelia Earhart) and a “Meatballs”-style summer camp comedy. Also on hand were some sabre dancers who were, at the last moment, attacked by zombies, and an a capella musical about puberty called “Balls Out.”

And after that, the deluge. At the end of the preview, exiting the theater, was a gantlet of actors passing out postcards. Mostly people I know. Oh, there was Natalie Rae Wass inviting people to a play about knitting and alternate dimensions! There’s Heather Meyer in a nurse’s outfit trying to get people to come to her show, which is culled from sex advice from 1960s women’s magazines! There is Ben Egerman holding a wolf-head puppet, encouraging attendance at his play that seems to be set in the future, in which animals have taken over the earth and gather to tell folk tales about extinct humans. Hi Natalie! Hi Heather! Hi Ben!

What, take a card? All right … I suppose I will.