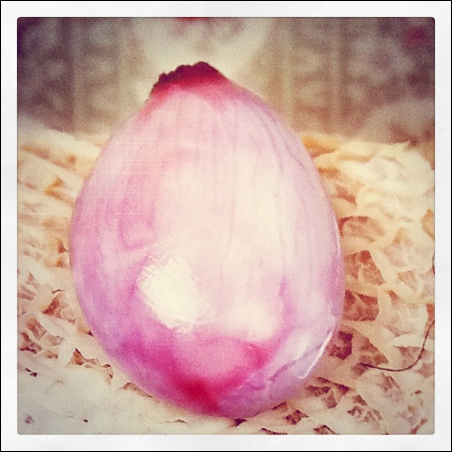 One of the best things about writing about the arts is that you occasionally get to write a sentence like the following: This past weekend, I saw perhaps the finest-looking testicle I have ever seen.

To a degree, one wishes one could stop there. It is, after all, a sentence fraught with possibilities. At this moment, any story is possible, so long as it ends in me looking at a testicle. Any further embellishment will make the world a smaller place. At this moment, it could be any testicle. Two sentences from now, it will be a specific testicle, and infinite possibility will be reduced to a specific event. Ah well; so be it.

The testicle in question is from a photograph by Erin Hernsberger called “Honeycomb Stomach and Cow Testicle,” currently on display as part of the Soo Visual Arts Center’s “Untitled 8” juried exhibition. Hernsberger has been very precise in her naming of her photograph: It is a large, pink and unexpectedly gorgeous cow testicle placed atop a bovine reticulum. Both are atop a florid tablecloth, and the photograph is framed in a faux-elegant white frame with some white filigree around it, providing it with just a hint of kitsch.

It’s part of a series of photographs by Hernsberger of generally repulsive things photographed and framed to look unexpectedly appetizing: a bloody liver in a teacup, a gray sheep heart with a melting pad of butter atop it, and, most startling, a translucent pig embryo, looking made from gelatin, its unformed bones visible through its skin as little red lines. This is presented atop a scoop of cottage cheese, as though offered as a healthy appetizer. You can see the whole collection on Hernsberger’s website, but that doesn’t quite do them justice. In life, the images are quite large, and their bigness, combined with their subject matter, makes them showstoppers.

Hernsberger’s work has been quite smartly placed opposite a series of images by Steven Lang, who was there at the exhibits and stared jealously across the aisle at her photographs. His work is a fabulous counterpoint to Hernsberger’s, though. Where she approaches her subject matter with exceptional precision, his work is an act of chaos, a sort of Eat Street terrorism. He takes food from local restaurants and upends it onto his scanner. “There’s some arrangement,” he told me, a bit too quickly, as though worried that the anarchy of, say, “Teppanyaki Grill and Supreme Buffet (To Go), $4.99/lb” might seem too anarchic. It is, after all, a riot of spilled rice, noodles, egg and corn, and it’s thoroughly unappetizing. To enter the “Untitled 8” exhibit is to walk a gauntlet of upsetting comestibles, although one half expects Andrew Zimmern to show up with a fork at the ready. Lang’s talent is that he makes, say, a McDonald’s combo meal look just as odd and unappetizing as anything Zimmern might consume over the course of his day. His scanned images produce the odd feeling known as “jamais vu,” the exact opposite of déjà vu, in which the commonplace becomes quite alien.

The exhibition was jurored by Batholomew Ryan, who is an assistant curator at the Walker, and he has a taste for the startling, it seems. There is, as an example, an example of video art by the wonderfully named Kate Cassanova, currently called “Ornament” but given the more bluntly descriptive name “(Untitled) With Hermit Crabs” on her website. It’s a six-minute, 22-second high-def video of three large hermit crabs crawling around on a woman’s head. She has her back to us, so we cannot see her face, but instead her braided hair, which the crabs explore with what seems to me to be no small amount of confusion. You can watch it on Vimeo, but it’s really best in a gallery space, playing on a loop. You watch it for 30 seconds or more, and then move on to other pieces of art. You look back a half-hour later, and the hermit crabs are still in a woman’s hair, still perplexed, and always will be.

On the other side of the hermit crabs are two pieces by Laura Hallen created by taking somewhat girly items, like a tutu and pompoms, and placing them in a plexiglass box. The result looks like one of those science experiments we had to do in grade school, in which we would take a piece of bread and toss it in a jar for a week, allowing it to become engulfed by cotton candy-like spores. I don’t think I will be able to see a tutu again without worrying that it might cause an environmental illness due to mold sensitivity.

Kitty corner from Hallen’s pieces are three works by Emily Bennett Beck that are likewise girlie in an unsettling way, and therefore I adore. I usually read artists’ statements and then ignore them, because I don’t really care what an artist thinks they’re doing, but instead am interested in how they do it. The meaning of art is always up in the air, and an artist’s statement sometimes only reflects just how confused an artist is about what they are making. But I think Beck’s is instructive, as she writes that her work reflects “an unceasing attraction to tragedy, excesses of glamour, and personal drama made public.” 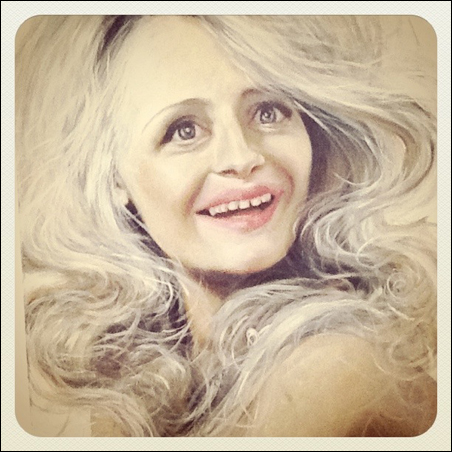 In fact, her work has what feels like a deliberately naive quality, as though somebody were painting something she thought was beautiful and just went hysterical with it, pouring so much emotion into it, and embellishing it with so many preposterous details, that it becomes grotesque. Even the titles have that quality: “Jenny Valentine’s Fantasy of Randy Whitehead-Goldentan,” which shows a man with television soap-opera-star good looks, hugged by a sort of teddy bear, his face marked with a lipsticked kiss. My favorite of her pieces is “Recent Bride #1,” a portrait of a woman’s face with her hair swirling around it as though a careful coiffure had just collapsed from exhaustion. The woman smiles maniacally, her eyes wide and pained, her lipstick a mess, seeming as though someone had tried to smear it off her face. She looks entirely unhinged; I wish the models in brides’ magazines looked like this. I feel certain that this is how people may actually feel on their wedding day.

There’s more, but, alas, I have limited room to write about things, and, of course, I got distracted by describing the testicle. That’s how things are. It really only takes one appearance of a generative organ for it to become the main subject of discussion.

At last, art for Andrew Zimmern: ‘Untitled 8’ at Soovac