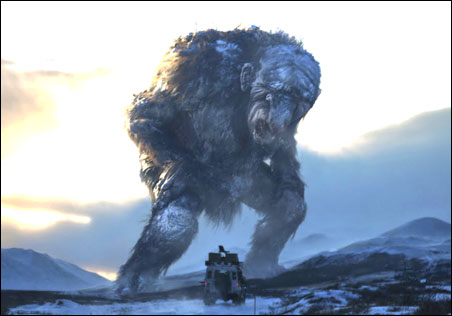 There is a movie out just now at the Lagoon Cinema that was lensed and set in Norway, and has a moment early on in which a group of student filmmakers follow a bearded man into the woods. For a few moments, there are loud, inhuman bellows, and then the bearded man rushes out toward the students, crying out “Troll!”

In a perfect world, this would be one of those moments when a film becomes a regional favorite. It used to happen with some regularity — a movie would just click someplace, and play there for just about forever. Minnesotans were mad for “Harold and Maude,” and the film played at the Westgate Cinema in Edina from 1972-1974, clocking in a grand total of 1,975 showings. I met a film critic a few years ago who had spoken with Bud Cort, the film’s Harold, and said that Cort had credited Minnesota with keeping his career going during a lull.

Minnesotans also went apey for “Babette’s Feast” and “My Life as a Dog” — I don’t have the exact stats for these films, but I recall both enjoying extended runs at the U Film Society. It happens in theater as well, with Minnesotans having a peculiar love for “I Do! I Do!” a light musical that once starred Mary Martin and Robert Preston on Broadway, and had a healthy life of 560 performances, and then was mounted by the Chanhassen Dinner Theatre, which ran it for 20 years.

Unfortunately, the era of the regional favorite may have come to an end. Movie theaters aren’t independently owned or managed as they once were, with a local staff that can decide to just endlessly run a film that catches fire. Movies are booked into theaters for a few weeks, and then pushed out on DVD or for online viewing — although Netflix does have a feature where they tell you what is popular in your area. Currently: “Bizarre Foods” with Minnesota’s own Andrew Zimmern, and also the locally made doc “Urban Explorers.” I don’t know if they are finding the sort of mass following that “Harold and Maud” did, but at least we know Minnesotans still have a taste for homegrown stuff.

But if this were the ’70s, and we were at the Westgate Cinema, I wouldn’t be surprised if the abovementioned troll film, “Trollhunter,” managed to find a two-year audience. In a lot of ways, it is perfect for Minnesotans. First, we have a lot of Norwegians here — the biggest population in America, if I’m reading my population charts right, numbering some 868,000. Second, we have trolls in Minnesota.

Not real ones, of course. But if you head into Scandinavian gift shops, you’ll see shelves covered with the beasts, including a store in Glenwood called The Valley Troll that is nearly overrun by the creatures. The wonderful LARK Toys in Kellogg is home to what seems to be hundreds of trolls, many riding the store’s signature carousel. The privately owned Holly Skogen Park in Starbuck is filled with statues of trolls (as well as gnomes) by Arne Pederson; locals apparently leave notes for the monsters. You just never know when you’re going to bump into a troll — you might be strolling through, say, Spring Grove, Minn., and there, right in the town square, is a troll statue.

They’ve invaded our literature as well. A lot of us grew up with “The Troll with No Heart in His Body” by Duluth resident Lise Lunge-Larsen (who declares herself to be a “troll expert” on her website) and illustrator (and fellow Minnesotan) Betsy Bowen. But there’s also “Tree Trolls! in the Rommegrot Pot” by locals Marjory Johnson Wood & Teresa McCue, which tells of trolls in Minnesota’s North Woods.

And, of course, it is possible to see trolls every single day in the online comments section of our daily newspapers.

So Minnesota seems to be an ideal market for the film “Trollhunter.” I’m frankly astonished that the filmmakers didn’t fly over here with the cast and set up residence in the Swedish Museum for a few weeks, and just go ahead and declare July “troll month,” or something. But I guess the days of that sort of ballyhoo are behind us, as the era of the regional favorite may be.

Still, the film has a run at the Lagoon, and I’ll be curious to see how it does. It is, in some ways, a very slight film, and many Norwegians reviewers were a bit ho-hum about it as a result. Thank goodness I am an American and a flibbertygibbet, and so don’t care if a film is slight or not, as I found “Trollhunter” to be a delight.

The film is shot in what I’ll call “film student vérité,” leading to inevitable comparisons with “The Blair Witch Project,” as both involve a lot of scenes from the camera’s point of view as the cameraperson pitches in terror through a darkened woods. And the “Blair Witch” comparisons are compounded by the fact that the film purports to be found footage, and the filmmakers have disappeared, which is the exact same gimmick “Blair Witch” used, although it’s an older gimmick than that, dating back at least as far back as “Cannibal Holocaust” from 1980.

But “Blair Witch” was a horror film, or, perhaps more properly, an improvised microbudget art film using the trappings of a horror film. “Troll Hunter” is a comedy, of sorts, although its sense of humor is at once wild and dry. It barely tips its hat to its comical intent when Norwegian comedian Otto Jespersen shows up as the eponymous trollhunter — a fact that would only be meaningful to Norwegians anyway. And Jespersen plays his role completely deadpan, as a weary public functionary whose job is akin to that of a slaughterhouse employee.

But the wildness is in the details, and this is one of the most minutely detailed films I have ever seen. Writer/director André Øvredal has taken great pains to make the trollhunter seem like a credible tracker, and so he scans the forests of Western Norway for signs of troll activity — broken trees, tossed stones, animal carcasses. And because Jespersen is a government employee, he has reams of paperwork he must fill out, and we see the forms, which demand to know such details as how many heads the troll had. Realism has always been about the accumulation of surface detail, until you’ve added enough to create a believable fabrication. Øvredal prefers to pass the moment of credibility, so that each new detail he adds in starts seeming satiric.

This is all in service of three or four set pieces in which our student filmmakers face down computer-generated trolls, and the trolls are magnificent, looking just like illustrations from Theodor Kittelsen brought to life — tree-sized man-like beasts with oversized noses and scowling, droopy mouths. In an abandoned mine, the trollhunter and the student filmmakers are confronted by dozens of such trolls, all flatulent and sniffing the air like dogs, nothing but their massive proboscises visible under their matted hair. “Mountain kings!” the troll hunter declares with utter gravity, and it’s a moment that captures the tone of the film just right — hysteria passing itself off as seriousness, lunacy presenting itself as mundane reality, and nonsense masquerading as reasonableness.

Which, come to think of it, describes Minnesota’s online comments-section trolls quite well too.

Of trolls and Minnesota: Why ‘Trollhunter’ should be a regional favorite