Some weekend recommendations. We’ll begin with Robert Altman, as Take-Up Productions is offering a retrospective of his work at the Trylon Microcinema. It began last night with “M*A*S*H,” Altman’s 1970 comedy about the Korean war that offered up a gang of mobile hospital doctors as countercultural heroes, and which everybody universally decided was actually about the madness of the war in Vietnam. But there’s another, more troubling way to read the film — that Hawkeye Pierce and company are privileged rich kids whose status as noncommissioned officers gives them license to wildly abuse everyone around them, and whose few moments of heroism, such as standing up to the incompetent and bullying Frank Burns, doesn’t entirely balance out their own bullying, such as their decision to repeatedly sexually humiliate Major Margaret Houlihan. 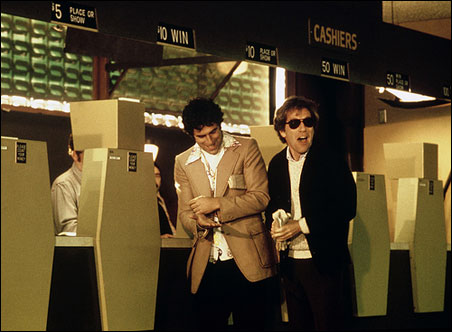 But never mind — that film has screened, and tonight it’s on to both 1974’s “California Split” and 1976’s “Buffalo Bill and the Indians.” The former stars George Segal and longtime Altman muse Elliott Gould in an unexpectedly realistic comedy about gambling. The film benefits from a few things — it was co-written by a former gambler, and its other author was a very young Steven Spielberg, who was originally slated to direct. The two wrote marvelous overlapping dialogue, and Altman used this as his cue to record the whole film using an eight-track sound system, which would become one of Altman’s signatures — he could have everybody talking at once and then edit the sound so that fragments of conversations jump to the front.

He cast as extras members of Synanon, a group for recovering gambling addicts, and often lets their conversations drift to the front, giving the film an unexpectedly complex and realistic quality. And the film benefits most from Gould, then at his performing height, who himself had periods of obsessive gambling. He has the jokey manner of the casual insider, and he dazzles and baffles Segal, playing a character new to the world of gambling and growing increasingly — and dangerously — obsessed with it.

“Buffalo Bill” is an oddity, in a few ways. It was adapted from a play by Arthur Kopit called “Indians,” but it’s an exceptionally loose adaptation and, in general, is an exceptionally loose film, following the day-to-day business of the circus act William F. Cody had created out of the mythology of the West. Cody is played by Paul Newman in a terrifically eccentric performance, treating the man as washed-up and ridiculous, convinced that his fairy tale of the taming of the frontier — and his heroic part in it — is truth.

Into this comes Chief Sitting Bull, played by Frank Kaquitts with stoic dignity. Sitting Bull will not play Cody’s version of the West, especially his version of the Battle of Little Big Horn, which Cody wants presented as a cowardly victory. After all, Sitting Bull was one of the main players in the actually history of Little Big Horn, which, if anything, was a battle for survival against genocidal soldiers that had decided to annihilate Native Americans. But, as with typical Altman films of the era, this plays out episodically, interrupted by comic vignettes and exceptional attention to detail. And, as he had done with “California Split,” Altman allowed much of the story to be told by side-conversations and overlapping disalogue; it’s like a revisionist Western that is being revised by its own extras.

Speaking of film, there’s a theory that Japanese movies created film studies departments at colleges. Specifically, the enormous popularity of Akira Kurosawa’s samurai movies, which led to an explosion of critical writing as scholars wrestled with the fact that stories from so foreign a culture, set in a period in Japanese history that would only be familiar to students of the subject, and performed in a language and making use of dramatic idioms that would be entirely alien to most American audiences, would nonetheless work as popular cinema here.

I don’t actually think there is anything too complicated about it, as Kurosawa was a fan of American Westerns, which may be why his movies could be so freely adapted into cowboy films — “Yojimbo” became “A Fistful of Dollars” and “The Seven Samurai” became “The Magnificent Seven.”

However, the paired Japanese storytelling forms of Manga (comics) and Anime (animation) can be a tougher nut to crack. Although both also sometimes borrow from American inspiration, the results can be highly idiosyncratic, and both have storytelling conventions that are meaningless to the uninitiated. For instance, in both, peculiar things can happen to a character’s nose. They might spontaneously get a nosebleed, which means they are sexually excited, for whatever reason. Or a bubble might appear at a character’s nose, and this means they are asleep. There’s no way to just know this by watching, but, fortunately, American fans of the two media take great care to self-educate, through websites, and, every so often, conventions. There is one such convention for fans of anime this weekend called AniMinneapolis, starting tonight at the Northland Inn.

It features the usual assortment of stuff you find at conventions — film screenings, special guests (including a number voice-over actors responsible for redubbing original films into English), and booths selling collectors items. But anime fans are especially fond of something called cosplay, in which you dress up as characters from animated films. As anime typically has a rather wild look, these costumes are often dazzling to see — people look like they are made out of plastic, with their hair crowning their heads in sharp points. And you’re not going to go to, say, a neurobiology conference and be greeted with a strict set of rules about realistic-looking weapons, as is the case here (they must be holstered at all times, except at a staged photo area, and must never be pointed at anybody).

Additionally, this conference features a number of performers who work in a hip-hop idiom called nerdcore, which is precisely what it sounds like. There is a performer named Dr. Awkward, as an example, whose songs include “Geekquilibrium,” which can be enjoyed on YouTube and includes the following sage advice: “Never trust a man wearing flaming attire.”

And this allows me a logical transition into talking about music, and, specifically, a style of music that had its own cult spring up around it: the waltz. This European folk dance, performed socially, very closely, and in three-four time, has been around since at least the 16th century, but everybody went absolutely mad for it around the time of the American Revolution. And there was one undisputed waltz king, Johann Strauss Jr.

The Minnesota Orchestra offers up a selection of Strauss’s compositions tonight as part of its Sommerfest program, including “Blue Danube,” one of his most popular, and a composition that has gone on to become sort of the unofficial theme song to Vienna. Keep in mind, though, the waltz, with its mad twirling in close proximity, was once considered so erotically charged that it was condemned by the church. So if anime has it right, there is a risk that, as you listen, you may get a nosebleed.