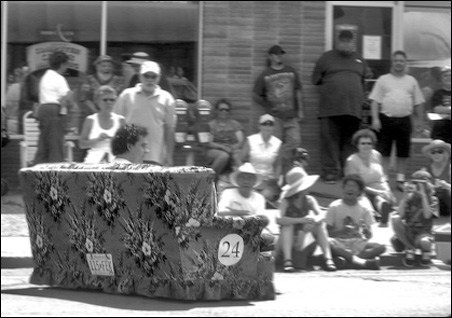 I recently watched a fascinating documentary about the Australian film industry’s exploitation filmmakers, called “Not Quite Hollywood” and available for instant viewing on Netflix. And if there is one thing that Australians did well, it was fetishize cars. With reckless abandon, they souped up already menacing-looking vehicles, set them out on local highways, and went as fast as they possibly could, filming the entire time. It’s no surprise that Australians produced “Mad Max” and “The Road Warrior” — their attitude toward the automobile seems perfectly summed up by the character Nightrider from the former film, who roars across a post-Apocalyptic wasteland screaming, “I’m a fuel-injected suicide machine!”

In general, we Minnesotans aren’t quite as strung out on speed. But we do like to muck with our cars, and we have our own festival dedicated to the results: the annual art car parade (which now also includes art bikes). Tomorrow at the Lake Harriet Bandshell, starting at 6 p.m., you’ll be able to see what happens when you give a Minnesotan a vehicle, a lot of time, and too much imagination. The results are often quite funny — I remember an art car from a few years ago that was nothing but a wood-paneled station wagon with a baby carrier on its roof, rigged with a realistic baby doll that cried quite loudly. Another enterprising fellow rigged his sofa to drive around like an automobile, and, as this year’s announcement mentions a couchmobile, he must be back, despite the fact that such a vehicle seems as suicidal as anything you might find roaming the Aussie outback.

If your taste is less for automobiles and more for motorcycles, well, Saturday has you covered as well, thanks to the Bearded Lady Sixth Annual Motorcycle Freak Show, starting at 2 p.m. at the 331 Club in Northeast Minneapolis. We can safely expect this to be an especially loud event, unless everybody has suddenly gone for those electric motorcycles that make no noise at all. If they have — well, there’s still music aplenty, as the day’s programming includes The Brass Kings, as well as two bands with names that sound exactly right for this sort of event: Rumble Seat Riot and Crank Shaft.

There’s a film playing at the Walker that I haven’t had a chance to see yet, but it sounds utterly fascinating: “Hampton Alexander,” lensed by 19-year-old Timothy McKinney in 1972 and filmed in the Rondo neighborhood of St. Paul. The hour-long film tells the story of a Vietnam veteran on a mission of revenge. The film was, in part, a product of an organization called the Inner City Youth League, a Selby-Dale neighborhood organization that worked with at-risk kids. At that time, the neighborhood was reeling from the construction of I-94, which went right through Rondo, uprooting many of the residents; From descriptions of “Hampton Alexander,” this sense of displacement runs through the film, which was itself displaced for quite a long time: It was discovered a few years back in the attic of the Youth League offices.

Finally, we’re in an odd transitional period between the closing of the Southern Theater, which has long been home to many of Minnesota’s most innovative dancers, and the opening of the Cowles Center in September. Fortunately, the annual “Momentum: New Dance Works,” presented by the Walker Art Center in association with the Southern, is still on and still at the Southern. Tonight will feature Kenna Cottman and Mad King Thomas. Cottman specializes in West African dance and drumming, which she parallels with contemporary hip-hop dancing, while Mad King Thomas are hard to place in any specific genre of dance, instead inventing movement based around themes, or scenes, or particular ideas they want to explore.

With the opening of the Cowles Center, we’re likely to see everybody discover something that should be a secret to nobody — that the Twin Cities are home to an extraordinarily vibrant and inventive dance community. This has, unfortunately, sometime seemed like an open secret, and even among patrons of dance, they’ve sometimes gravitated toward one or two companies and missed what the rest of the community has to offer. As many different companies will be sharing the Cowles Center space, we’re probably going to see a new audience, one based around the center and is amenable to whatever is playing there, from ballet to contemporary choreography. I expect things will change quite a bit for the local dance community as a result. This makes this performance of “Momentum” particularly interesting — it may be one of our last chances to experience Twin Cities dance as it has been for the past decade or so, before the potentially transformative deluge of attention that often comes with the opening of a significant institution.

This weekend: cars, motorcycles and dance