Every so often, I wind up with a dozen or so things that I’ve done, none of which I really have enough to say about to make a full column, but all of which I have something to say about, and so I’m going to group them all into one column today. There used to be a name for this sort of thing, omnium gatherum, but that phrase sort of sounds like a tome some bearded wizard might take with him when a shadow falls across Middle Earth, or a six-piece melodic death metal band from Finland, which it is.

So I don’t have a good name for this sort of thing. Titles aren’t really my thing anyway. I tend to just call a thing what it is. For instance, my last play was about a group of inebriated musicians trashing their hotel room, and I called it “Effed Up Rock Stars Trash a Hotel Room,” except I didn’t use the word “Effed.” So we’ll just called this “Bunny Unloads His Notebook” and move on from there.

Firstly, in film: There’s no denying Daniel Craig makes a good action hero, although I’ve always thought he looked like a mean version of Monty Python’s Michael Palin, who himself was occasionally capable of meanness, such as slapping people with fish. Put Daniel Craig in a cowboy suit and have him fight aliens, as is done in “Cowboys and Aliens,” a film made by people who also favor obvious titles? I will go see your movie. And the film is closer to a western than a science fiction film, as the aliens are basically strip miners, and serve the same function Indians used to in cowboy movies: as rampaging marauders. There’s something a bit oogy about this, even though the film includes Native American characters as heroes. Since these sorts of westerns are closely linked with the actual history of the U.S  government’s genocidal war against this country’s native population, it feels a bit like a filmmaker decided to remake “The Eternal Jew,” but make the titular wandering Hebrew into, I don’t know, a troll, and then have the heroes include a few Jews who set out to kill him.

But this is the sort of thing that causes me to be accused of overthinking things, so I will recommend the film based on one specific aspect: Harrison Ford. He’s always been best as the thinking-person’s action hero, but I don’t think he’s really been in a film that properly showcased this since 1997, when he did “Air Force One,” and that film was a bit preposterous. You have to go all the way back to 1994’s “Clear and Present Danger” to find a really superb example of Ford in an action film. But he’s a pleasure in “Cowboys and Aliens,” playing a gruff, aging Civil War general who has long come to terms with violence, and the uses of it. He’s grouchy, exasperated, sharp-tongued, and taciturn with affection, which are the exact character traits of many great cowboy movies characters. Ford’s so good in this, his character should get his own film. Preferably one that doesn’t have any aliens in it. 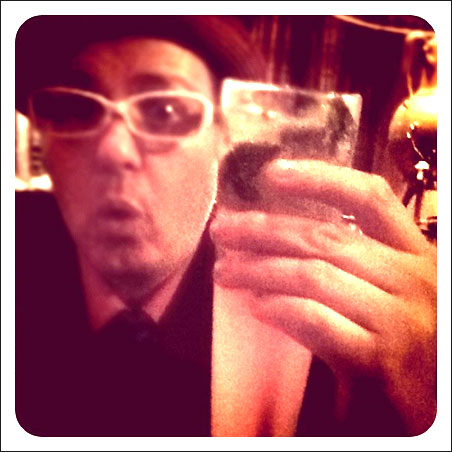 Photo by Coco Mault
The cranberry mojito at Kincaid’s

And now, on to alcohol, which, this being me, I probably should have started with. I recently had drinks at Kincaid’s in St. Paul for their late-night happy hour. I’ve been there a few times because they have a marvelous corn bread which they affix the name “Santa Fe” to, perhaps because it includes hot peppers. I have the dietary restrictions of John Travolta in “The Boy in the Bubble,” so can’t eat bread unless it is gluten free, which means I can only eat bread that tastes like bread created by somebody who has never tasted bread, but only heard about it. But I can eat corn bread, and when I get the chance, man, I eat my share.

Kincaid’s also has a quite reasonable happy hour — specialty drinks are only $4. I had two, their pomegranate margarita and their cranberry mojito. In both cases, there is an ingredient added that isn’t in the original recipe, and they put it right in the drink name. Margaritas are usually tequila, orange liqueur and lemon or lime juice — no pomegranate. Mojitos are usually rum, sugar, lime juice, sparkling water and mint — no cranberry. And usually I am particular about adulterations of traditional recipes. But I have repeatedly had good experiences with traditional cocktails getting goosed a bit with fresh fruit, or by infusing the alcohol with fruit, and that’s what has happened here. In both cases, the fruit flavor is subtle but enjoyable. And aren’t we supposed to have more fruit in our diets anyway? Problem solved.

As I mentioned a while ago, my favorite art collection is at the Chambers Hotel in downtown Minneapolis because it’s all either irritating or terrifying. I’d like to point out my favorite example of irritating art at the hotel, a piece called “Pile” from 2004 and created by British artist Gavin Turk. The fellow is famously annoying in the way really entertaining artists can be annoying — for instance, he was refused a degree from the Royal College of Art in London because his final show consisted of just a white gallery, empty but for a plaque that celebrated Gavin Turk as being a historically important sculptor. “Pile” is just a bunch of full trash bags. 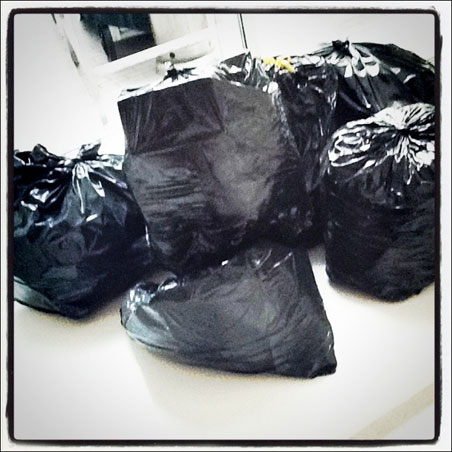 Sort of. When John Waters was in town, he talked about cleaning ladies as being contemporary art’s greatest enemies, because they always mistake it for trash and throw it out. Turk has solved that problem — his trash bags are actually bronze sculptures of trash bags, carefully painted to look convincing like plastic and trash, and so any cleaning lady who tries to get rid of it is liable to herniate herself.

Speaking of irritating British artists, I just completed watching both seasons of “Saxondale,” an English sitcom from 2006 and 2007. It was cocreated by and stars Steve Coogan, an actor who has never been afraid of being pathetic, and really rose to fame playing a character named Alan Partridge, who is sort of England’s answer to Ted Baxter. In “Saxondale,” Coogan played Tommy Saxondale, an aging rock and roll roadie who has retired from the road, working as a pest exterminator while regularly attending group sessions for his temper problem.

What starts off as caricature — in the early episodes, Coogan is obviously enjoying exploring the physicality of an older, slightly overweight man who still carries himself like a young rocker — quickly develops into a marvelous portrait of a man trying to maintain his self-identity as a rebel well past when it fits him. There is much to like about the character, including the fact that he considers himself quite well educated about the world in general, but has only one point of reference for contemporary music. He knows the name of English singer songwriter Dido, and will use her to represent any kind of music he can’t stand, including techno. But the most surprising thing about the show is Saxondale’s temper. It’s very rarely showy — he rarely raises his voice or becomes violent. Instead, it tends to manifest itself as a sort of sputtering incoherence, where the ordinarily loquacious Saxondale suddenly stops making sense altogether, stammering our embarrassing non sequitur and looking bewildered, like a dog that’s just heard a very loud noise.

“Saxondale” is available on Netflix instant view just now, and I recommend it. I think the show will be especially resonant with America audiences. We are, after all, the original rock and rollers. More than that, we come from a culture of rebellion, and Americans are pretty good at convincing themselves that whatever they’re doing is an act of sticking it to the man, even when they’re supporting the status quo. We’re an entire nation of Tommy Saxondales, and so we’re either going to appreciate the show, or it’s going to make us very, very cross.