It’s easy to mourn the end of the era of the character actor, which seemed to reach its apex in the 1970s. Back then, films starred people with distinctive faces and intelligent, troubled personalities. America’s top actors include Al Pacino, Dustin Hoffman and Gene Hackman. Our leading actresses included Ellen Burstyn, Geraldine Chaplin and Lily Tomlin. A crime film might star Walter Matthau or Elliot Gould. Even actors who could have traded on their looks alone showed unexpected soulfulness, such as Sally Field, an actress who had made a career of adorableness, but who played Norma Rae in 1979. I’ve often felt that we’ll know serious change is afoot in this country when college revolutionaries stop wearing T-shirts of Che Guevara and start wearing T-shirts of Sally Field holding a sign that reads “UNION.”

Nowadays, the ranks of Hollywood sometimes seem filled out by generalized, semi-anonymous beauties. There are still character actors, to be sure, appearing in the background of mainstream films, or starring in little-seen art house movie. We have our Steve Buscemis and John Turturros. But you look at the exceptional career of somebody like Irish actor Brendan Gleeson and it’s almost all supporting roles. With his stocky frame and his wry face, which looks like some sort of folk-art project carved out of a potato, he’s not your traditional leading man, but he’s as magnetic on the screen as anybody.

He’s made four or five films per year for a decade now, and he’s always wonderful in them, but you’ll usually find him standing behind Liam Neeson or menacing Leonardo DiCaprio for a few minutes, and then he’s gone. In the ’70s, he would have been a star. 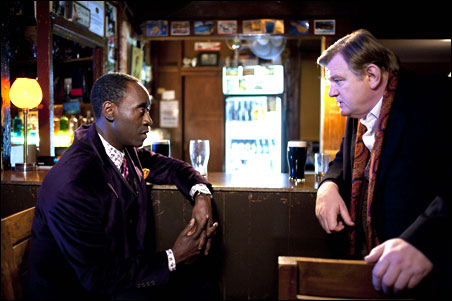 And what might that have looked like? Well, thankfully, there’s a film out now called “The Guard,” and it cast Glesson in the lead, which goes a long way to reminding us that it can be an awfully good idea to cast a character actor as the star of your film, rather than just as background color. The movie was made by John Michael McDonagh, brother of Irish playwright and director Martin McDonagh, and Martin recently made use of Gleeson in what was pretty close to a lead role in a film called “In Bruges.” The above-the-title star was Colin Farrell, and he was certainly the focus of this entertaining crime caper, in which two hit men flee to West Flanders after an assassination goes disastrously wrong. But Gleeson had a big role in the film, and the most active role, as Farrell’s character was both ignorant and a bit dense, and so it was up to Gleeson to make decisions for them.

But “The Guard” gives him a proper lead role, and it’s magnificent. He plays Sgt. Gerry Boyle, a policeman in the Irish-speaking west coast of Ireland. Boyle is a small-town voluptuary — everything he does has a hint of indulgence to it, from the pink socks he wears under his police uniform to the velvet smoking jacket he throws on when guests arrive at his modest, but modern, little home. On his days off from work he hires prostitutes to come in from Dublin dressed as policewomen and parades them around town. He discusses Russian literature with his ailing mother and steals MDMA off the bodies of party kids killed in car crashes.

And more than anything, he takes great pleasure in taking the mickey. In his thick Connemara accent, he likes playacting the bumpkin, pretending to be much dumber than he actually is. It’s a sort of an Irish twist on Columbo, played by another great character actor, the recently deceased Peter Falk. But Columbo pretended to be rather thick to get people to underestimate him. There isn’t enough crime in Connemara for this to be a useful tactic for Boyle, and everybody knows he’s much smarter than he lets on. One gets the sense that he does it mostly because he thinks it’s funny. He enjoys getting under people’s skin, and he particularly enjoys doing it with an FBI agent in town on an international drug case, played by Don Cheadle. The FBI man is easy to irritate, and so Gleeson does so nonstop, oafishly insulting the man’s children, profession and race, all with a look of wide-eyed innocence.

We also follow a gang of criminals, and they’re great fun — part of a long tradition of wisecracking bad men dating back to, oh, at least “Performance” from 1970, which is a clear stylistic influence on most contemporary British crime films, such as “Layer Cake” and “Lock, Stock and Two Smoking Barrels,” but probably dates back much further. These are criminals who only interrupt a constant stream of sardonic commentary long enough to kill somebody, and then immediately return to their conversation. They’re the only ones in the film who underestimate Gleeson, and it’s a mistake.

The film is almost ridiculously pleasurable to watch. It’s directed with great verve by McDonagh — many of the scenes have a punchy energy, encouraged by quick cuts and off angles. It’s goosed further by an unexpected soundtrack choice, an American alternative country band called Calexico, who scores the film a bit like a Sergio Leone film, with fast-strummed Spanish guitars and soaring brass. This leads to the film’s climax feeling a bit like an Old West duel at noon, despite it taking place late at night on a nondescript dock that leads out to the Atlantic. It also succeeds at something I rarely see in films anymore — you end up worried about Gleeson. He’s outmanned and outgunned and does not believe he can survive the encounter, and isn’t sure he should. For a moment, he drops his wisecracking persona, asking Cheadle if it hurts to get shot. He isn’t happy with the answer, and we aren’t either. I have never worried for Tom Cruise or Dwayne Johnson when the guns come out. It takes a character actor to have you fear that he might die in a firefight. 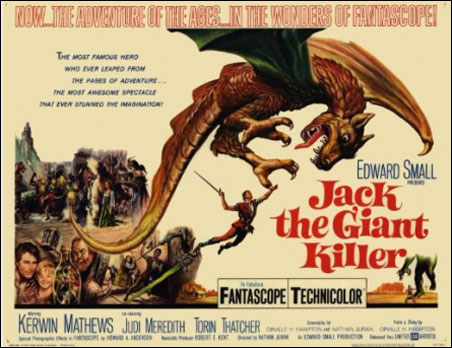 One more fast film recommendation: In 1962, a film came out called “Jack the Giant Killer,” which is generally regarded as being awful. (At the time, the New York Times wrote the following: “The acting is terrible, the dialogue is even worse, and some extremely jarring touches of the macabre — yowling skeletons and witches, splashed around in rather messy special effects — simply aren’t for the small fry.”) Worse still, it was made as a musical, not because music belongs in the film, but because Columbia Pictures, which had its own giant monster franchise in the Sinbad films, threatened to sue if “Jack” was too close to what they were producing. Filmmakers have produced bad films ever since the motion picture camera was created, and what to do with them? We could just avoid them, or, in the spirit of British criminals, we could gather around them and offer up a nonstop stream of sardonic commentary.

We Minnesotans didn’t pioneer this — Susan Sontag wrote about this exact sort of behavior in “Notes on Camp.” But we figured out how to turn it into a cottage industry, thanks to “Mystery Science Theater 3000” and its various spin-offs. One of the cleverest of the post-MST3K projects is RiffTrax, featuring the last cast of MST3K: Michael J. Nelson, Bill Corbett and Kevin Murphy. They’ve found a way to circumvent the difficultly of licensing films to make fun of — their commentaries are downloadable audio tracks that you synchronize with whatever film you’re watching, which allows the cast to mock literally any film that is available for viewing.

They still perform live now and then, though, and tonight at 7 p.m. they’re tackling “Jack the Giant Killer” via NMC Fathom, which produces live theatrical events that are simulcast to movie theaters. The live commentary can be experienced at at least seven Minnesota theaters, so check your local listings to see where the show can be caught.