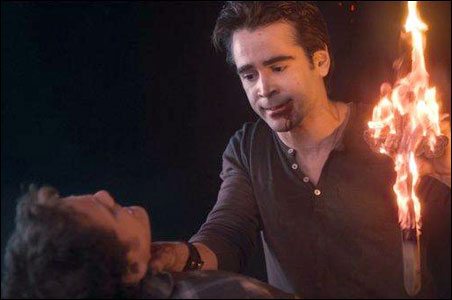 Two films opened this past weekend that are remakes or, as is often done now, “reboots,” in which a whole franchise is started over from scratch. Films and comic books have been the two mediums most often rebooted, but I’d like to see this trend extended to other arts. Reboot the Beatles, reboot Mark Twain, reboot Andy Warhol; let’s see what they’d be like in this modern world.

Alas, as is often the case with Hollywood, these two new films are cleverer, slicker and better-produced than the earlier versions, but have lost much of the crazy character that made the originals so memorable. Let’s start with “Fright Night,” a remake of 1985 vampire film that keeps most of the original’s plot points and a surprising amount of the original dialogue. In fact, it even places in the film something that previously was only found in the novelization: That the main character, Charley Brewster, has started to outgrow his childhood geekiness, which means he has also started to outgrow his childhood friends, and is doing it badly.

Both films tell of what happens when a mild-mannered vampire named Jerry moves in next door, and there is a lot to recommend the new “Fright Night,” not the least of which is its vampire, limned by Colin Farrell. The Irish actor gives his bloodsucker an odd sort of casual menace — he’ll approach you to murder you with exactly the same sort of “howdy neighbor” mannerisms that he might use to greet you at a neighborhood cookout. Stalking Brewster in a club, he sees the boy across the room and nods and smiles at him, just as you might when you unexpectedly see somebody you know and like. Farrell’s Jerry is the kind of guy who calls everybody “guy,” but he does it just before he kills them.

The film also has an unlikely vampire hunter in the form of Peter Vincent, a Las Vegas magician with all the swagger of a sodden rock and roller. He’s played by former Dr. Who David Tennant, but it’s a role that seems written for Russell Brand, who has utterly mastered both the charm and the childishness of a certain black top hat school of English rock. Tennant has a lot of fun with the role, however, shirtlessly sulking around his eBay-purchased arsenal of vampire-hunting weapons, drinking Midori, screaming at his girlfriend (who screams back, and one ups him every time), and cowering in terror — not from the vampire, but from Brewster, who, with his tales of vampire attacks, seems like some sort of deranged fan.

Brewster himself is a bit of a letdown, but then, he was a bit of a letdown in the original film as well. He’s played here by Anton Yelchin, who took the role of the youthful Russian Chekov in the “Star Trek” reboot, and played the role with charming quirkiness. Here, that quirkiness is replaced with a sort of anguished teen earnestness. It’s not inappropriate — one gets the sense that he was both more interesting and more fun a few years back, when he’d dress up like a superhero in his backyard, and that abandoning the nerdy part of himself has meant abandoning the very things that made him fun and likable. However, this means that he’s a bit of a wet blanket. The film doesn’t really make much of the fact that fighting a vampire means returning to his geeky past, which, with his backyard live-action role playing, gave him the exact tools he needed to fight the vampire. Over the course of the film he should get geekier, and become weirder and more fun; he doesn’t.

But the original fumbled with this as well. William Ragsdale, the Charley Brewster of the original film, is the last interesting character in it. And part of the reason for this is something that’s absolutely been abandoned in the new version: Every single other main character in the original film is coded gay. The original Jerry isn’t a working-class bumpkin, but a fruit-eating, scarf-wearing dandy with a live-in carpenter (the two are physically affectionate) and an elegant last name, Dandridge, played by Chris Sarandon. Ragsdale’s girlfriend is a tomboy with short hair, played by Amanda Bearse, who later came out of the closet as a lesbian. His best friend, Evil Ed, is played by Stephen Geoffreys, a spiky haired character actor whose taste for irony seemed pitched at hysteria, and who is widely reported to have gone on to act in gay porn. And Brewster’s uncertain vampire expert, Peter Vincent, is played by Roddy McDowall, an actor whose gayness was one of Hollywood’s worst kept secrets. He played Vincent as a man of delicate, almost broken mannerism — he’s Vincent Price without the camp, as a sad, forgotten older man.

In fact, there isn’t much camp to be found in the original film, which, although a comedy, seems shot through with heartbreak. Early on, Jerry offers to “turn” Evil Ed, and it’s a striking scene, in which the older man tells the younger man that he knows what it’s like not to be normal, and to be despised for it. The scene has Ed sobbing, and ends with an embrace (and, of course, a bloodletting) — as many have noticed, it feels a bit like a seduction, and a bit like a coming-out scene. Later, when (spoiler alert) Brewster must dispatch Ed, the boy lies on the ground, weeping piteously, and both the film and Brewster watch his death with pity. There’s nothing like this in the new version, and, as a result, it feels like a lesser film. 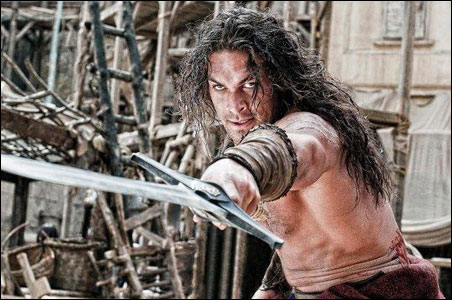 Photo courtesy of Lionsgate
Jason Momoa is “Conan the Barbarian”

This week’s proper reboot is “Conan the Barbarian.” I won’t go into too much detail about the new version, as it’s the sort of film you’re either going to see or not, regardless of criticism. Like “Fright Night,” it has its pleasures, although they are decidedly trashy — Robert E. Howard’s sort-of-Celtic warrior lives in a lost history of this world, after the fall of Atlantis, that consists almost entirely of swordfights and copious female nudity. This film is skittish about neither. Almost all women in the film are shirtless, although, to be fair, so is Conan. The fights are accompanied by eruptions of gore, showers of it, really. Although this story, in which the title character (played with a strange, delighted smirk by Jason Momoa) must stop an evil sorcerer, is built around the cliché of a man saving a woman, you get the sense that what Conan is really after is his father’s sword, stolen from him years ago. Which is what you want in a Conan film.

It’s not so much a reboot as it is an attempt to get back at Howard’s original writing, which had Conan as clever and unexpectedly ethical — he was a barbarian knight errant, redressing the world’s wrongs with an unflappable personal code, which, fortunately, included a taste for bloodshed. It is, however, a duller version of Conan than the one conceived for the original 1982 adaptation of the film. The film was less a product of Howard than it was of its two creators, the unlikely pairing of Oliver Stone and John Milius. Milius cowrote and directed, and is a notorious (and delightful) Hollywood blowhard, a raving, right-wing, military obsessed maniac who also happens to be preposterously entertaining. He is the basis for the character Walter Sobchak in “The Big Lebowski,” and he scripted much of “Apocalypse Now” and the Indianapolis sequence of “Jaws.” Stone, meanwhile, was a long way from being the conspiracy-obsessed filmmaker who’s been toiling on the edges of legitimacy for years now. No, he had a few horror film to his name, both quite freaked out (“Seizure” and “The Hand”), he had scripted the critically acclaimed “Midnight Express,” and his new prominence in Hollywood put him behind the typewriter for a selection of the maddest films of the decade, including “Scarface” and “Year of the Dragon.”

In Conan, Milius and Stone had an actor who was probably born to play the role, and was on his way to becoming an action icon: Arnold Schwarzenegger. And so they built a film around his oaken physique, his maniac smile, and the fact that his accent and wooden delivery made him, at the time, seem astonishingly dense. The original-film Conan is mostly about the spectacle of physical action, with an early scene having the character grow up literally yoked to a grinding wheel, pushing it in endless perambulations. Conan doesn’t have much dialogue, and what there is a suitably absurd: He answers the question “what is best in life” with a Genghis Khan paraphrase, saying “To crush your enemies, see them driven before you, and to hear the lamentation of their women.”

The new cinematic Conan is nowhere near as floridly mad as the original, which makes him a lot less fun. He gets only one moment like this, although it’s a great one. Talking with the film’s female lead, he sums up his philosophy of life with a line from the original writing by Howard: “I live, I burn with life, I love, I slay, and am content.” His female companion, a former Guess model named Rachel Nichols, hears this and stares at him, astonished by what he has said. It’s the sort of line that you’re either going to love or will cause you to roll your eyes, which is exactly what’s going to make you either want to see the film or not. Nichols must be the sort who would want to see a film like “Conan,” as she responds to his pronouncement with a kiss.