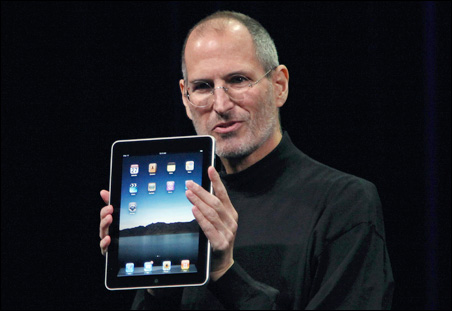 REUTERS/Kimberly White
Steve Jobs saw a creative potential in the device beyond its ability to quickly create spreadsheets, and it was in large part due to his vision that computing is used for so much creative output nowadays.

This tribute to Steve Jobs was originally published after his retirement as CEO of Apple.

You probably have already heard that Steve Jobs retired as CEO of Apple Inc. yesterday, offering up to his board, and, by extension, the larger public, a brief and to-the-point letter of resignation that suggested his departure is due to his declining health. There are not many businessmen whose retirement causes so much online chatter and such a frenzy in the news, but, then, there aren’t many Steve Jobses. He has been the chief visionary at Apple, on and off, since he cofounded the company in the 1970s, the company that ushered in the era of the personal computer. And while Apple never enjoyed market dominance — it was Microsoft and the various PC clones that did that — they all seemed to be chasing Apple’s tail in terms of innovation.

But if Apple never dominated the PC market, it enjoys a healthy chunk of the MP3 player market, and absolutely owns the tablet market — two of the more recent developments in our Information age. Both were nursemaided into existence by Jobs in one of the more remarkable late-career stories in history — Jobs serves as a rebuke to F. Scott Fitzgerald’s claim that there are no second acts in American life. His was dazzling.

And so there will be a lot of retrospectives today about Jobs as inventor and about Jobs as businessman. I’d like to offer a third perspective. Because, in my view, Steve Jobs didn’t just help make personal computing possible — that would have happened one way or another. But early computers were sophisticated adding machines, and early drafts of the home computer were extensions of this. Steve Jobs saw a creative potential in the device beyond its ability to quickly create spreadsheets, and it was in large part due to his vision that computing is used for so much creative output nowadays.

Bundled MacPaint and MacWrite
He’s always done this, to some extent. The Macintosh computer came bundled with both MacPaint and MacWrite, a graphics painting and a word processing program. Almost immediately, people began to create new art on the Apple — in 1985, Marvel released a comic book that was drawn using MacPaint, called “Shatter.” I recall it being very odd-looking when it came out, but, looking at it now, it had a bitmapped quality that is very appealing, looking like stills from the animated cutaways from early video games.

Apple computers still come bundled with creative software. The current Apple computers don’t have a graphics painting program — perhaps a legacy of the fact that Apple voluntarily stopped bundling MacPaint with its computers when third-party software creators complained they couldn’t compete. But, then, drawing with a computer is a laborious process, and all but a minority of computer users have tended to prefer clip art. As far as I can tell, Apple no longer manufactures anything like MacPaint.

Instead, all new computers come bundled with iMovie and GarageBand, and both the iPhone and the iPad come with built-in digital cameras. There’s no way to really quantify how much creative output has been produced as a result, in part because other computers quickly followed Apple’s lead and offered their own video, music and photo editing software. Collectively, this has led to an explosion of home filmmaking (currently, about 20 hours of video is uploaded to YouTube every single minute) and amateur photography (the Apple-based Instagram program, which can be downloaded free to the iPad or the Ipod for use with the device’s camera, has existed for only 10 months; it now boasts more than 7 million users and is responsible for more than 150 million photos.) It’s a bit harder to create something in GarageBand, but not much; I would guess the program is primarily used for making podcasts, which it is ideal for, as it makes it easy to edit audio and comes with a variety of radio-like musical stings and noises that can be cut into the recording. It’s impossible to guess just how many podcasts there are out there — back in 2005, it was estimated there were 60 million. But they’re a bit like blogs — new ones pop up all the time, and old ones are abandoned, sometimes after just a few episodes.

It’s getting easier to make music with GarageBand as well, thanks to a variety of digital instruments and “Jam Packs” filled with prerecorded sounds that can just be dropped into a composition. There’s no popular sharing site for home-recorded music, as there is for photos or video (for instance, both can easily be shared on Facebook), but videos of GarageBand-created songs show up with great frequency on YouTube.

Means of distribution
But it’s not just the software that has contributed to this explosive growth of user-generated content — under Jobs’ stewardship, Apple has been unusually perceptive to the fact that art doesn’t just need a means of production, but also a means of distribution. The web has served this function, and Apple has been particularly good at exploiting it. Its iPhoto program, as an example, allows you to share your pictures with a number of popular online photo sharing sites (including Flickr and Facebook). iMovie will send a video directly to YouTube. The iTunes store may be the world’s largest distributor of podcasts. It takes a bit more effort to get songs you make in GarageBand released on iTunes, but just a bit. And with Apple’s relatively recently released ebook program, iBooks, digital book publishing might enjoy similarly explosive growth.

I do not wish to make it sound as though I am giving Steve Jobs all the credit for this. Jobs didn’t write the software I described, he’s not responsible for many of the online sharing sites I have mentioned, and a lot of this culture of amateur creativity has been created by by users and third-party developers. But Apple has been unusually keen in both encouraging this development and exploiting it. Creativity on other computers has long been backbreaking, involving locating outdated and buggy software and then fiddling with it for hours to get it to interact with other programs, with printers, with sound cards, and with the web. Apple has always made it a priority to make this process as intuitive and seamless as possible. Moreover, it has made it a priority to make creativity an essential part of the computing experience. Under Jobs’ watch, software that encourages creativity has come free with your purchase of a computer. It’s not something that Apple offers as a premium option, or as separate software for interested parties. For Apple, its integral to the experience of computing, and has been since MacPaint first came bundled in on the Macintosh.

It is now so essential to our experience of computing that we can’t imagine personal computing without it. But look at other computers that came out at the same time as the Macintosh — they rarely came bundled with any software at all, and what there was usually consisted of spreadsheet programs, sophisticated calculators, and other data crunching programs. There were word processors, sure, but these were business machines, and one expects the word processors were included in the expectation that people would use it to write business correspondences. The revolution in home computing, as envisioned by other companies, was one in which the business computer was placed in the home; it’s as though they thought the only use for it would be to make shopping lists, or keep track of phone numbers, or balance checkbooks. But, with Jobs in charge, Apple really seemed to treat home computers as extensions of whatever we do at home, which is why it’s been so easy to, say, watch a movie on an Apple, or listen to music, or doodle. And what else did people do in their own homes? They went into the garage and formed bands. They kept their family photo albums. They read books at bedtime and newspapers at the breakfast table. They shot Super-8 movies and screened them in their basement.

Expanded our scope
Apple, with Jobs in charge, has taken all of these activities, recreated them on the computer, and made them essential to the experience of home computing. Further, he’s helped expand our scope of what can then be done with this sort of amateur home creativity — it can now easily be shared with the world. It’s a uniquely democratic approach to the creation of culture, which was always made be the average person anyway, but was sort-of officially made by professionals. After all, they had the money and the distribution network to reach the largest audience. That whole model of culture creation has fallen apart thanks to the home computer, to the disappointment of those who made their living from it. Mass distribution used to be limited and costly, and that enforced scarcity, and with scarcity comes profits. Now mass distribution is all but free, and we live in what’s called a post-scarcity world of art and culture.

For better or worse, Steve Jobs gets a lot of the credit — or the blame — for this state of affairs. But, in the next few days, we’re going to hear a lot about the technological and business revolutions Jobs helped create. I felt I should also mention the cultural and artistic transformation he also fathered.