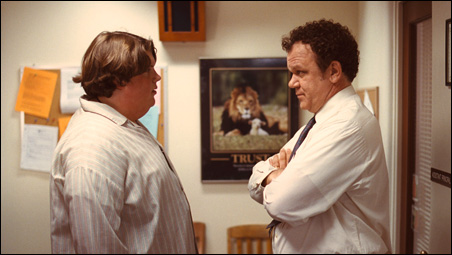 I saw a film called “Terri” this weekend, although I did so with no small amount of trepidation. Independent films about kids can be a bit much, and this one, which peeks in on a few months in the lives of misfit 15-year-olds, with the title character being a heavyset boy who is taking care of his dementia-prone uncle, looked like it might be a bit of a downer. I have strict rules about films with children in them. I won’t, for instance, see foreign-language films that feature children, because they are always a bummer. François Truffaut taught me that lesson with “The 400 Blows,” and I have never forgotten it.

But I am less strict about American independent films that feature children — although I approach the subject with hard-won caution. For every “Hesher” there are at least a dozen “The Squid and the Whales,” so I would guess that, with these sorts of films, I have a 12 out of 13 chance of walking out of the theater depressed. But “Terri” also features John C. Reilly, who has blossomed in the past half-decade into an actor of almost unsurpassed daffiness. (It’s always been there, lurking in the background; check him out in “Boogie Nights” for early samplings, including a superlative dancing nightclub magician scene at the end.) In the trailers for “Terri,” Reilly seemed to be doing what he does better than anybody else — playing an adult as though he were an oversized high-school senior trying to pass himself off as the cool kid.

I realize “will it bum me out?” is perhaps not the best aesthetic criteria. But it’s worth considering, as I realized years ago when I saw both “Leaving Las Vegas” and “Dead Man Walking” in a single afternoon and then spent the rest of the week moping about the fact. Thankfully, “Terri,” despite its subject matter, isn’t especially depressing. At one point, Jacob Wysocki, draws an emoticon to show how he’s feeling, and it’s a smiley face, but with a straight line where the smile would be. That’s about the mood of this film. Terri seems like a kid who would have a lot of problems — he’s started ditching school and, when he shows up, wears pajamas. But he also has a talent for finding little moments of pleasure. He has an understated appreciation for music, and a few scenes have him listening to old records or sitting near his uncle, who plays piano. He doesn’t smile often, but he smiles enough.

The film, written by Patrick DeWitt and directed by Azazel Jacobs, has an unerring eye for the awkwardness of youth. Terri is isolated and teased, and so lags a little behind the rest of his classmates in terms of social development — which isn’t necessarily a bad thing, as his fellow male students have developed a precocious and pushy interest in sex. This plays out badly for one of Terri’s classmates, played by Olivia Crocicchia, who is old enough to share that interest but still too young not to be stung by it. She finds herself ostracized from her classmates, but for Terri, who strikes up a friendship with her that would have been inconceivable before she became a social pariah.

Terri is part of an informal group that meets on a regular basis with John C. Reilly, who plays the school’s assistant principal, and who seems to have made it his life’s work to make himself a buddy and resource for the school’s misfits. However, he has a taste for cheap dramatics, and doesn’t realize that for Terri, being made part of this group, and being treated to Reilly’s showy attentions, just drives home that Terri is a misfit too. There are many moments where Reilly’s attentions end up hurting Terri more than they help him. “I’m just trying to help you, dude,” Reilly says at one point, and Terri sadly responds that he wishes he wasn’t the sort of kid who needs Reilly’s help.

It all reaches a climax of sorts at an all-night party at Terri’s, a sort-of impromptu date with Crocicchia’s character that is interrupted by the school’s spaz, played by Duluth-native Bridger Zadina, who shows up with alcohol. It’s a nerve-wracking scene of misplaces and misfiring romantic attentions. It’s a scene that could go very badly, as anyone who has seen “Kids” — the ne plus ultra of bummer juvenile movies — can attest.

It doesn’t go great; the night is fraught with little humiliations, with each kid attempting more than they are ready for, and failing. For anybody for whom the bruises of growing up are still fresh, I imagine this would be an immensely painful scene to watch. I’m old enough that these bruises have healed, and I saw the scene as being filled with compassion. I suppose one of the marks of growing up is learning that it’s all right to try something and fail, and you’ll take some lumps as a result, but the lumps aren’t so bad, and are worth the attempt. Terri — and the few misfits he makes awkward gestures of friendship toward — seem to take more than their share of lumps, but, then, we all do.

None of it is very easy for Terri, and the film doesn’t cover enough time for us to see him changed much by his experiences. But he seems sanguine, in a way — he’s come to expect that these things will happen, and he’s learned to deal with them as best he can. And for those of us who have experienced growing up, this is a hopeful note to end on, as those are the exact skills Terri will need.