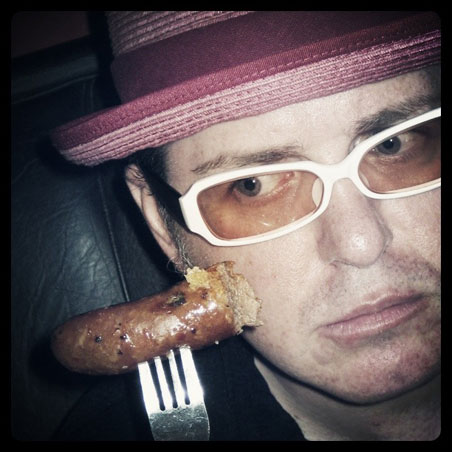 Photo by Coco Mault
Max: “So how is alligator meat? Well, as offered by the Bullfrog, it’s tough and spicy.”

I am going to take a brief break from covering the Fringe today to discuss alligator.

Before I get to either of them, let me start with an introduction. I am, as some of you know, a vegetarian. This came about almost accidentally, when I was a boy. I had somehow discovered Tao Natural Foods on Hennepin Ave., and, for whatever reason 16-year-olds get interested in subjects, I spent a few weeks reading books they had on the ethics of vegetarianism. I found the idea appealing, for what I remember as a combination of reasons. I did not especially wish to hurt animals, so there was that. But I was also struck by the austerity of it, which appealed to me. I then did not feel that I had very much control over my life, and the idea of controlling what I eat was appealing to me. I suspect it is often thus with people who adopt strict or unusual diets — part of the appeal is control.

I did not, however, think my parents would go for it. And so, rather than simply declare myself a vegetarian on the spot, I decided I would stop eating meat when I was 18. And that’s what I told my mother that evening, who, mishearing me, declared to my father upon his coming home that I was now a vegetarian.

They didn’t seem to care one way or the other, and so I have been a vegetarian ever since. I have not regretted it. Or, rather, I should say, I have rarely regretted it.

I sometimes wished I wasn’t so strict when I lived in New Orleans. Not that I would just abandon my diet and start wandering around the quarter with a shank bone in one hand and a live chicken in the other, alternating between taking bites out of one and then the other. But New Orleans is a pretty meaty town, and the city’s collective reputation for culinary excellence is nonpareil. I wasn’t unhappy — there were cheese poboys and red beans and rice and whatnot to keep me happy. But I would see my girlfriend, Coco, eating mudbugs or erstas, as New Orleaneans call crawfish and oysters, and she would roll her eyes with delight, and I would think, why so strict?

It wasn’t the seafood, really, that had me thinking of breaking my diet. It was another animal that cajuns call a cocodrie, and whose meat was sold as a sort of novelty in the Quarter, along with souvenirs of its head, its teeth, its claws, and, sometimes, its pizzle. I speak of the alligator, whom I always felt I could possibly forgive myself for taking a bite of. After all, it would forgive itself for taking a bite out of me.

I never did, though, and it’s one of my few regrets.

But, then, last night, I ate an alligator.

There’s a cajun bar that has opened along Hennepin called The Bullfrog, which seems to be a sister saloon to the Bulldog bars in Uptown and Northeast, and I had been meaning to stop in for a while. They serve Abita beer, a genuine Louisiana brew that’s hard to locate here, but marks the bar as making an effort at Louisiana authenticity. Abita is to New Orleans as, say, Summit is to the Twin Cities, in that everybody drinks it and thinks it is excellent. New Orleans also had a cheap beer called Dixie that was destroyed by the hurricane and subsequent looting, and was sort of the Pigseye of NOLA. The Bullfrog doesn’t offer Dixie, but, then, nowadays nobody does — it looks as though it’s one of the casualties of the storm.

They also offer a native New Orleanean cocktail that is made, and drunk, without any sense of irony: The Hurricane, which was created by Pat O’Briens in the Quarter, and was the last drink I had in New Orleans before I fled Katrina. It’s not a great drink — it’s a rum and fruit concoction that’s more popular with tourists than with locals. But as tourist drinks go, it’s one of the best — usually tourists are handed go cups of some slushy ground ice mixed with rum and artificial flavoring, and they wander about drinking it in the streets, inadvertently insulting the city that produced the original, and one of the best, cocktails: the sazerac.

The Bullfrog’s Hurricane is perfectly serviceable. It doesn’t taste like Pat O’s, but, then, as I said, Pat O’s doesn’t make a spectacular Hurricane anyway. The Bullfrog’s is very fruity — so much so that the first few sips actually tasted like plum to me. It is what you want in a Hurricane, in that’s it’s tall and made with a lot of rum and it’s quite easy to drink. But I wasn’t there for the Hurricane. I was there for the alligator.

The Bullfrog offers several alligator meat options. You can have it fried with hush puppies, or you can have it as a sausage. I chose the latter. It came in a large hot dog bun, covered with grilled onions and peppers, all of which seemed to be breaded. I ignored everything except the sausage, as, besides my obnoxious vegetarianism, I have the stomach of a character from a decadent novel who has ruined his health with a dissolute life, and can only eat a watery gruel. So no bread for me. However, as it turns out, I have no stomach issues with alligator meat.

So how is alligator meat? Well, as offered by the Bullfrog, it’s tough and spicy. There’s some gristle to it, which I had forgotten even existed, having gone without meat for 27 years; suddenly I found myself chewing on what seemed like hunks of rubber. I didn’t mind, though; this is alligator meat, after all, and I expect it to fight back. I had not, however, forgotten how meat tastes, which is good, and this is, I assume, why people eat it in such enormous quantities. An alligator sausage doesn’t taste all that different from a hot dog, except that it comes heavily spiced, which I appreciated. I know Minnesotans are afraid of spices, but I got hooked on them in New Orleans, where everything is made in a cloud of paprika and cayenne pepper. In fact, I added more spices to the sausage, in the form of Louisiana hot sauce.

New Orleaneans add hot sauce to everything. They put it on pickles, and breakfast eggs, and burgers, and poboys, and potato chips, and once I thought I saw a man adding it to ice cream. New Orleans restaurants will generally have a selection of hot sauces, all of which are made in Louisiana: Tabasco, of course, which is made at Avery Island, but also Crystal, made in Reserve, and Louisiana Hot Sauce, made in New Iberia. New Orleans gift stores sell novelty hot sauces, usually with images of, I don’t know, a mule kicking Osama bin Laden out of an outhouse while a trail of fire streams from his hindquarters. They’re all variations on the same formula — peppers in vinegar — and people can be quite particular. I’m a Crystal man myself, but the Bullfrog had Louisiana, and so it was Louisiana that went on my alligator. It’s a sharp hot sauce with a nice amount of heat to it, and seemed the right thing to be drenching a murderous reptile with.

So this is how my diet shall be from now on. I remain, as ever, a vegetarian, except when given the opportunity to eat something adventurous, whereupon I will retake, however briefly, my position at the top of the food chain. Prefereably with hot sauce.

I know I’m being a bit long-winded, but I’d like to tell a very fast Louisiana alligator story, because it’s terrific and I am involved and there is a song that goes with it.

A few years ago, thanks to the web forum Metafilter, I stumbled across the amazing tale of Devin Funck, a young boy from Slidell, which is just across Lake Pontchartrain from New Orleans. Funck had gone swimming in the local swimming hole, despite the fact that the lake was shared by a monster of an alligator known as Big Joe. For whatever reason, Big Joe decided Devin looked like a tasty morsel and went to take a bite out of him. The alligator pulled Devin below the waters and bit off his entire arm.

This happens every now and then. What made the story especially notable was Devin’s response to the experience, which was pure, unforced bravado. Local authorities hunted down Big Joe after the attack, and they presented the animal’s head to Devin. “He takes my arm,” Devin said, “I take his head.”

As to his arm, Devin demanded a replacement. “Give me a robot arm that looks like the Terminator,” he asked.

This struck me as having all the hallmarks of a folk hero, so I immediately set about writing a poem celebrating the boy, which I published on the site and can be read in entirety here. This being a site that thrives on collaborator, one of the site’s moderators, Josh Millard, immediately put it to music, which you can listen to at the end of this story. We sent a copy to Funck’s family, who responded fairly simply: “Wow.” I’m not sure what other response might have been expected. After all, a few days earlier their child had been attacked by an alligator, and now strangers on the Internet were sending them folk songs celebrating the event. But so it is with the Web.

And it was hard not to think about Devin Funck as I ate the alligator last night.

Lizards, if you’re listening; beasts, if you can hear:
There’s a killer out there that should make you slink in fear.

The vegetarian and the alligator: Reclaiming the top of the food chain at The Bullfrog