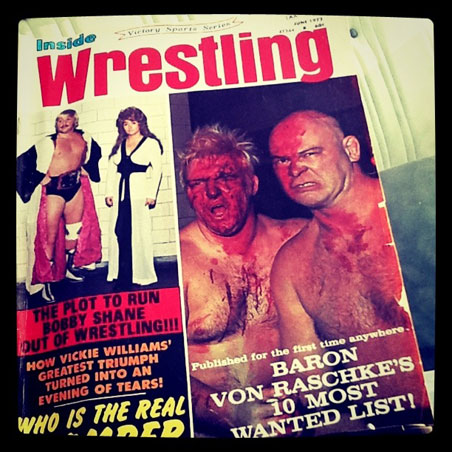 Like many people in the arts, I barely comprehend sports. I’m not constitutionally allergic to the undertaking, like many I know, but it’s something like, say, endocrinology. I know it exists in the world, and serves some sort of function, and when exposed to it I find it has a real fascination. But I don’t seek it out, and, when in the room with sports fans or endocrinologists, I feel certain that I am not sure what they are talking about.

But for pro wrestling. I don’t watch it now, but, like many Midwestern boys who came up in the ’70s, I grew up on a steady diet of weekend wrestling matches, filmed and broadcast locally and interrupted by commercials for polka albums (The Six Fat Dutchmen! Frankie Yankovic! Whoopee John!). My brother and I would eagerly watch burly men pin each other in the ring, all of whom had cartoonish, oversized personalities and a penchant for barking threats into the camera. “Everybody knows — EVERYBODY KNOWS the TRUTH, Wahoo McDaniels! The REF might notta seen them illegal moves you pulled, BUT THE FANS SEEN IT, and JUSTICE WILL BE DONE next Sunday in MILWAUKEE!” After this, my brother and I would wrestle each other into inevitable injury.

I was taken with the more floridly working-class characters. I was, for instance, especially interested in a Wisconsin wrestler named Reginald Lisowski, which isn’t the sort of name you use when you’re wrestling, so he went under the nom de ring of The Crusher. He was a blond-locked, cigar-chomping tough guy who liked to call his opponents “turkey necks,” and was responsible for one of my favorite commercials. Cigar in mouth, The Crusher would glare at the television screen while hoisting a televisions set. “Sicka yer old teevee?” he’d ask. “TROW IT AWAY!” And with that, he’d throw down the television set, smashing it. I presume this was a commercial for some electronics store that was trying to convince people to purchase new televisions, but, truthfully, I don’t know, and nobody has uploaded it to YouTube yet.

However, if YouTube is still lacking as the world’s greatest archive of old commercials, the site more than makes up for it by being the world’s greatest jukebox. I have discovered that, almost without exception, any song you can think of can be found on YouTube — sometimes people just play old albums and film the platter spinning on the record player. And so it is that another of The Crusher’s great media moments has been preserved. It seems I was not the only Twin Citian who  was intrigued by this man — no, in 1964, a group of high schoolers from the Morningside neighborhood of Edina created a theme song for the man. They called themselves The Novas, and they got signed to a local label called Dove in St. Louis Park. There they recorded their timeless ode to The Crusher, impersonating his gravel voice, calling listeners “turkey necks,” naming wrestling moves, and screaming “rage!” repeatedly.

The song has made its rounds. Rhino Records included it on its “The World’s Worst Records,” which gave it a sort-of proto-punk cachet, and as a result, it’s been covered by some notable performers. Psychobilly greats The Cramps, as an example, did a note-for-note cover, and it has also been rerecorded by rockabilly lunatic The Legendary Stardust Cowboy and actress Edith Massey, a Baltimore legend best known for her appearances in John Waters movies. But the Novas’ original remains the best, and, thanks to YouTube, I can share it with you:

I spent yesterday afternoon with one of The Crusher’s longtime foes, as was, and is, the way with wrestling. Wrestlers would either be good guys or bad guys (called “faces” and “heels” in wrestling lingo), and this would engender epic enmity. And so Thursday was a day for James Raschke, better known to wrestling fans as Baron Von Raschke, and even better known by his nickname, coming from his signature movie: The Claw.

Von Raschke was one of the most florid of a florid generation of wrestlers. He scowled constantly and threatened people with an open hand, coiled back like a cobra. He was one of the first wrestlers I remember who seemed to possess supernatural powers — his finishing move, sometimes called the brainclaw, consisted of clamping his hand on his opponent’s head, who would quickly collapse in agony. The spectacle of the brainclaw was so monumental that the WWWF would censor it, slapping a giant red X over the spectacle when it occurred. In backyard wrestling, we were forever threatening each other with the claw, and if one child grabbed another child’s head, we all knew what that meant. Lights out.

In fact, that stuck with me for so long that when I was in college, and worked at the University of Minnesota’s college radio station, WMMR, there was a fellow named Raschke, and every time he passed I would threaten him with a claw hand. Somebody finally pointed out that this was Baron Von Raschke’s actual son, Karl, and people had been making the claw hand at him his entire life, so it might be something that irritated him. Karl Rashke is now a photographer, and a few years ago I emailed him to apologize. “You are not alone if you did indeed reenact the Claw for my benefit,” he emailed back. “That still happens from time to time when my dad’s career comes up. It’s a small price to pay for growing up among a unique cast of characters.” 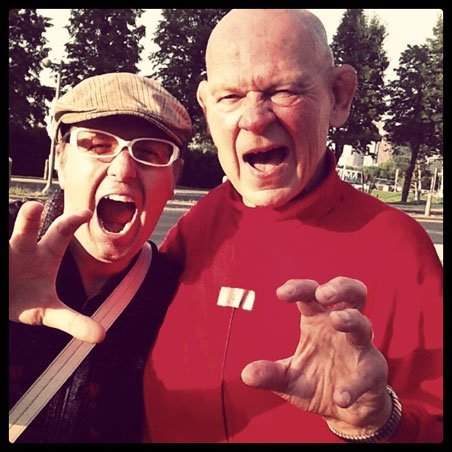 In his time, Baron Von Raschke bounced back and forth between being a face and a heel, but he was every bit the local legend, and never lost that quality — he shows up on commercials and music videos now and again, still in character. He has a terrific ally in his son, who cocreated a play about his father that enjoyed a successful run at the History Theatre a few years ago. This has now led to a kind of unusual documentary about Von Raschke — not so much a documentary as a dramatic recreation of the life of the Baron, created in piecemeal every now and then, directed by Phil Harder, who has made a few music videos featuring the Baron. So yesterday, Harder and both the Rashkes were at the Walker Art Center, filming a scene and offering up a short discussion with the wrestler.

I showed up for both — they needed extras for the film, dressed as though it were the ’70s. And so I popped by in a polyester shirt and stood behind a baby blue convertible car, begging Baron Von Raschke for an autograph (Karl gave me a spectacular magazine from 1972 that showed his father’s shaved pate drenched in gore). In the meantime, a reporter, played by Robyne Robinson, interviewed the Baron about a recent loss, which, in typical ’70s fashion, caused the Baron to directly face the camera and scream about how he was robbed and will have his revenge. Afterwards, we all retired to the Walker’s back yard, where Baron Von Raschke explained how he got into professional wrestler, and how he came to be known as the Baron — I filmed the interview, which you can watch below.