It’s starting to feel distressingly autumnal out there. And, sure, it’s lovely for all five of the days Minnesota has a fall, but then, alakazam, it’s winter again, and we’re back to bundling up like astronauts and watching newscasters throw pots of boiling water into the air, only to see the contents land on the ground as ice.

But there is something they say about clouds and silver linings, although I suspect the people who created this phrase never watched a bank of nimbostratus rolling into the city to bury us in icy precipitation. In this instance, from where I am sitting, at my corner office in the MinnPost Arts Journalism Complex, that silver lining is the return of arts events.

That’s not to say we have been entirely bereft of arts. But the number of them diminishes significantly over the summer — even artists have cabins on lakes, or, at least, access to them, even it it means breaking in through a window. There were weekends that felt like a cultural famine, but it’s back to feast. And so my list of this weekend’s events will be as it must be during such periods of abundance — specifically, a crime, as I simply cannot cover everything, and so some worthwhile events will necessarily, but criminally, be left out.

For instance, everybody decided to open their newest plays simultaneously. MinnPost’s own Don Shelby is in a production of “The Rocky Horror Picture Show,” as an example, playing at The Lab theater. It’s been interesting to watch our local news anchors after they retire. Robyne Robinson launched an unsuccessful bid to be lieutenant governor. Don Shelby hangs out with transvestites. And I am not sure who I respect more for it.

The Jungle Theater has a production of “Hamlet” going on. If you’re like me, you’ve seen so many productions of this play by the Bard that when the title character says “To be or not to be,” you must fight an urge to shout at the stage “NOT TO BE!” But then I settle down and discover I am actually enjoying the play. I used to say about Shakespeare that the mark of his genius is that he can survive so many bad productions, but now I think the real mark is that he can survive so many productions altogether and still be worth seeing. If anybody is going to do a production that’s causes you to think, ‘Well, maybe I’ll peek in again to see what’s rotten in Denmark,’ it is the Jungle. Especially as this production is by the theater’s artistic director, Bain Boehlke, and he has set it in the technological present, with characters interacting as much with their smartphones and iPads as with each other. Most versions of “Hamlet” that are set in a contemporary era just dress the characters in modern drag and let them do their Elizabethan thing, but it sounds as though Boehlke has really infused this production with a thoroughly contemporary sensibility.

The Mixed Blood theater has just begun their radical experiment in ticket pricing — their season is free to the public, as will be the case with next season as well. But there’s more reasons to head over to the theater than to see how its box office is going to work — they begin this season with Branden Jacobs-Jenkins’ play “Neighbors,” which is a deliberate exercise in unease. The play is thoroughly theatrical, in that it tells a story that cannot happen in the real world, but only in the world of theater: A black man watches as a new family moves in next door, and the entire family is made up of blackface caricatures of African-Americans. Reactions to blackface can be visceral. My own play “Minstrel Show” retells the killing of a black man through two fictional African-American blackface minstrels, and once, when the characters came out onstage, a woman in the audience spontaneously vomited. But minstrelry was the earliest theatrical representation of the black experience in America, and playwright Jacobs-Jenkins’ approach — playing an outdated form against a modern form of telling the black experience — is audacious and fascinating. 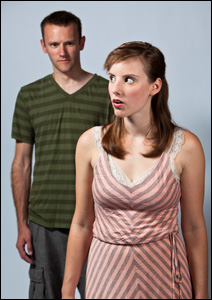 Speaking of unease, Walking Shadow is producing a play by Neil LaBute at the Guthrie. LaBute also has a taste for the provocative, and often provokes with cruelty. As an example, this play, called “Reasons to be Pretty,” is part of a trilogy of plays, connected thematically, and the last one in the series was called “Fat Pig.” (You’ll probably see the play’s title written in all lowercase everywhere else, but I give LaBute enough of a pass without also capitulating to his typographic whimsy.) Interestingly, while this play contains a lot of LaBute’s typical emotional violence, it also details, with unexpected compassion and gentleness, how people come to terms with their own disappointment in their bodies and faces, which they find imperfect and unsatisfying. That’s a theme that is likely to resonate with a lot of people, as so few of us are the world-class beauties we hoped we would be.

Pillsbury House opens a play this weekend that is decidedly adult in sensibilities: Alexi Kaye Campbell’s “The Pride.” The play is, to a small extent, thematically similar to “Neighbors,” in that it deliberately parallels the past and the present. Come to think of it, it’s a bit like Jungle’s “Hamlet” in that way, too. In this instance, however, what is paralleled is the gay experience in England in 1958 and 2008, telling virtually identical stories (the characters even have the same names). As the play jumps decades, it jumps in and out of the closet. This production features a typically fine cast — always a hallmark of Pillsbury House plays — including Paul De Cordova, Matt Guidry, Tracey Maloney, and Clarence Wethern.

Adventures in time and cruelty: The new theater season starts