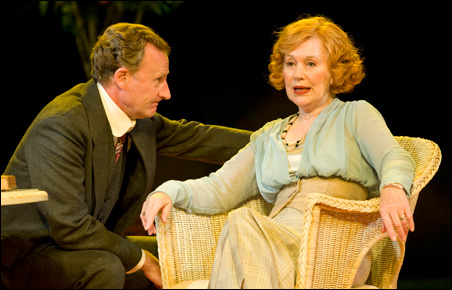 Photo by Michael Brosilow
Daniel Gerroll and Dearbhla Molloy in the Guthrie Theater’s production of William Shakespeare’s “Much Ado About Nothing.”

“Much Ado About Nothing” opened at the Guthrie last week. It’s a typically fine production, with the lead actors earnest and expressive and the comic actors positively balmy. But it’s got me thinking about a question I have puzzled about for a long time.

Why do we watch Shakespeare?
On the surface, this seems like a question with a pretty obvious answer. He’s the English language’s greatest playwright. Or: He wrote universal truths that still resonate. That sort of answer. And I don’t disagree with either of these, although some have taken issue with the first. As an example, George Bernard Shaw didn’t think much of Shakespeare. There’s a marvelous old article in the New York Times archive in which Shaw allowed that Shakespeare could be great fun, but otherwise said of the Bard that “he has no religion, no politics, no great concerns. He was a narrow-minded middle-class man.” He also calls the “to be or not to be” speech from “Hamlet” twaddle.

It’s enjoyable to hear one great playwright cut down another like this, although one suspects Shaw may have, in part, been motivated by professional jealousy — Shaw was notorious for comparing himself to Shakespeare. In fact, his second-to-last work was a puppet show called “Shakes versus Shav” in which the two playwrights duke it out, with Shaw telling his predecessor that he could not have written “Heartbreak House.”

But Shaw’s criticisms do raise a question: Just how did Shakespeare come to be seen as our greatest playwright? After all, in his own time there’s scant evidence that he was seen as being especially notable. At least, he didn’t attract the cult following that his contemporaries Philip Sidney or Edmund Spenser did, but when is the last time you saw, say, “The Countess of Pembroke’s Arcadia” by Sidney? In the meanwhile, there are at least two Shakespeare plays running concurrently in the Twin Cities.

It seems to help that Shakespeare’s plays were eventually printed. The details of this would consume a book, and there are unanswered questions as to the accuracy of the current versions we perform, as Shakespeare’s acting troupe took great pains to be sure his plays weren’t duplicated when he was alive in an attempt to prevent other troupes from performing them. We don’t have any of Shakespeare’s original texts, and it seems likely that some of the versions we have were transcribed by people in the audience, or remembered, years after the production, by actors who were in the plays. I won’t bother to discuss here whether Shakespeare was actually the author of his plays, which is a popular, if ultimately fruitless, conspiracy theory that will very soon be a motion picture directed by the same man who gave us “Independence Day” and “10,000 BC,” which featured aliens that can be defeated by a Mac computer and cavemen building the pyramids for unrelated space aliens.

The fact of physical copies of Shakespeare’s plays meant they were prime for plundering in an era called the Interregnum, during which Oliver Cromwell took control of the Commonwealth of England after a civil war, and during which time public stage performances were banned. Out of work actors took to fairs and inns to perform, and created something called “drolls,” which were typically a series of short scenes strung together with music and clowning. These were usually pillaged from Elizabethan theater, and so, as an example, Shaw’s despised “To be or not to be” scene had an independent life as a stand-alone scene in these semi-legal performances.

At this time, though, it would be hard to make the case that Shakespeare had any reputation beyond simply being another old playwright whose work was easily plundered. If you look at a book of these drolls collected in 1662, titled “The Wits, or Sport Upon Sport,” there are three scenes adapted from Shakespeare, but half of the total book is adapted from works by Shakespeare’s approximate contemporaries Francis Beaumont and John Fletcher, who often collaborated.

In fact, the two were held in such high regard that during the Renaissance while Shakespeare enjoyed frequent performances (often in debased productions, such as a notorious version of “King Lear” that featured Cordelia and Edgar getting married in the end, instead of Cordelia committing suicide), it was Beaumont and Fletcher who were seen as the English language’s most popular authors. There were, according to a contemporary account, two productions of  Beaumont and Fletcher for every one by Shakespeare. Is there a production of “Cupid’s Revenge” in the Twin Cities just now? “The Scornful Lady”? No. But, again, at least two plays by Shakespeare.

This would all change in the 18th century. And why? Well, in part, perhaps because of the development of literary criticism. Although Renaissance critics had developed some extraordinarily rigid ideas about what makes a good play, Shakespeare quickly developed champions — some, ironically, appreciating him the more because he did not really obey the Renaissance rules for good theater. And why? Well, these rules, called neo-classicism, were primarily argued by French critics. These rules never really found a following in England, and one suspects a sort of international theatrical rivalry was at the root of this. Critics such as  Thomas Rymer championed Shakespeare, in part because he didn’t fit the rigid French model of well-made theater. In fact, Rymer’s most famous piece about theater, “Essy of Dramatick Poesie,” is explicitly a defense of English drama as being just as good, and probably better, than French drama. It seems likely that much of the appeal of Shakespeare was how thoroughly un-French he was. He seemed completely ignorant of the classical unities, while Ben Johnson, who followed in Shakespeare’s footsteps, made use of them when he wanted to and ignored them when he wanted to.

If you follow the logic, the French were rigid, Johnson was semi-rigid, and Shakespeare was completely un-rigid. If you’re trying to find a playwright who is as not French as possible, Shakespeare’s your guy.

And so we came into the 18th century with Shakespeare’s reputation, at least in critical circles, firmly established; he quickly became the English language’s most popular playwright. And so we move into our modern period, one which Shaw called “Bardolatry,” which he saw as an excessive reverence for Shakespeare. Suddenly the plays of Shakespeare dominated the developing Victorian era (with a few problems — Shakespeare’s love of puns and sexual allusions were met with complaints.) He had managed, over the course of a half-millennium, to move from a successful but unremarkable playwright in his own era to being the finest playwright that the English language has produced.

I suspect it helps that he seems to have accidentally written plays that can easily be reinterpreted to each new era — take “Hamlet” as an example. It has enjoyed at least three local productions so far this year and is currently playing at The Jungle. It was very much a genre piece when it came out, an example of the revenge tragedy, but successive eras have revisited it as a dramatization of madness, heroism, the occult, and psychology, just as each of these themes became popular in their respective eras.

Depending on how you look at it, this might be evidence of Shakespeare’s genius. After all, we haven’t seen the same transformation in the works of, say, Thomas Kyd, who came from the same era as Shakespeare, and may have authored the original “Hamlet.” Unlike the speculation about the actual authorship of Shakespeare’s plays, there is evidence that Shakespeare based “Hamlet” on an older piece, called the “Ur-Hamlet.” Kyd, who fathered Elizabethan drama, is seen as a likely suspect for the authorship. We do have a play he wrote, “The Spanish Tragedy,” which is sort of the original revenge tragedy, and let’s look at the text. There’s a ghost. There’s a play-within-a-play. There’s a scheme to trap a murderer.

Holy cripes. It’s also “Hamlet.” Or, at least Shakespeare lifted quite a lot from Kyd. But do we perform the “Spanish Tragedy” nowadays? Not often.

I suppose some might argue that Shakespeare’s popularity is the product of his popularity, in a manner of speaking. That we see his work so often, and are so familiar with it, that we can insert ourselves into his ambiguities, and find contemporary meaning in even his most obscure work. Had enough of Kyd survived, and he had enjoyed the same ongoing popularity, he might have jostled into position as the defining English playwright. Shakespeare benefited from a large number of accidents of history. He was printed. He wasn’t French. Had the stars so aligned for another playwright, we might be seeing, say, Christopher Marlowe every few months, rather than Shakespeare.

It’s an interesting question, and I don’t have an answer for it. Depending on my mood, I flit between being a Bardolater and being Shaw. Sometimes Shakespeare’s works seem like they would necessarily be viewed as the works of genius, and sometimes he seems like an especially clever playwright who won a historical lottery, and who knows how long he might remain in the top spot. History is long and complicated, and the stars that aligned to put Shakespeare at the top might one day misalign and somebody else might find themselves catapulted into theatrical dominance.

Check back with me in another 500 years. We’ll know better then.