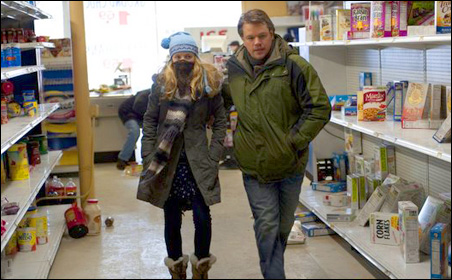 A lot has been made about the fact that the first thing you hear in the movie “Contagion” is a cough. But very nearly the second thing you hear in Steven Soderbergh’s disease thriller is the announcement of a flight to the Minneapolis – St. Paul International Airport.

So if you’ve ever wondered what it would be like if a disease ravaged the Twin Cities, well, your film has arrived, sort of. In fact, it’s not the Twin Cities — not really. Only a few scenes are identifiably Minneapolis, including the use of the exterior of the Armory building downtown, which is taken over for hospital overflow when the disease really starts to work its way through the population. “Find me three more just like this,” demands a field Epidemic Intelligence Service officer, played by Kate Winslet. Or, you know, you could just move the whole operation a few blocks down to the Metrodome. It’s got a roof and is considerably larger. And if that doesn’t work, well, you’re about eight blocks from Target Center … no? Not occurring to anybody?

Earlier in the film, she speaks on the phone to an infected man who is on a bus. “Where are you?” she demands. “Lake and Lyndale,” he answers. She then insists he get off the bus and … nope, that’s not Lake and Lyndale. There’s no Greek restaurant. No pizza place. No sound bar. No falafels. Just an anonymous urban street corner.

Of course, this is what Hollywood films do to Los Angeles all the time. A film set in Westwood, as an example, will have a character turn the corner and suddenly be in Brentwood. BRENTWOOD. Angelenos quickly become accustomed to the dream geography of film, where space is compressed so that one carefully location-scouted background can be right next to another. And “Contagion” is a film in which Minneapolis isn’t really supposed to be Minneapolis anyway. It’s instead a placeholder for any reasonably large Midwestern metropolis. Minnesota is occasionally Hollywood-speak for “not LA or New York,” a fact I learned years ago when I lived in Hollywood and met a number of the writers for “Coach.” This was sitcom that was approximately set at the University of Minnesota, although its exterior scenes were actually filmed at the University of Iowa. The writers were fascinated that I was from Minnesota and peppered me with questions about what it’s like to live here. As far as I could tell, none had ever visited, not even to research the location of their story.

“Coach” wasn’t the first example of this, though. I recall watching an episode of “The Mary Tyler Moore Show” in which Mary Richards and Rhoda Morgenstern go to a Mexican restaurant. They speak to the proprietor, expressing amazement that there are any Mexicans in the Twin Cities. “There used to be two,” he answers. “But then my brother went home.” Actually, at the time, according to the Census, there were 4,575 Mexicans in the state, mostly centered around Minneapolis and St. Paul.  Minnesota’s Hispanic population had been participating in the Festival of Nations since 1954. The Mo Pan-American Club used to sell tamales and burritos from a street cart at events while mariachis serenaded passers-by. Ballet Folklorico Guadalupe also frequented parades, festivals and schools throughout the ’60s, performing traditional Latin American dances. La Casa Coronado, a Mexican restaurant on Block E, had been open for at least seven years by the time of the “Mary Tyler Moore” show. How do I know this? Oh, mostly from newspapers and broadcasts from the era.

But, then, why would Mary Richards know about this? She was, after all, just a associate television news producer, which is hardly the sort of job that requires an awareness of the various populations of the Twin Cities, or covers cultural events. She works at WJM television, whose location is shown to be Midwest Plaza on Nicollet Mall, and that’s an entire block away from the old location of La Casa Coronado! But, then, Mary mostly eats at Basil’s in the IDS center, so perhaps she can be forgiven for being so culturally beknighted.

The show was scripted in Los Angeles, and mostly filmed there, but for Minneapolis cutaways, at CBS Studio Center in Studio City. And if the writers for Mary Tyler Moore were anything like the writers for “Coach,” pretty much all they knew about Minneapolis was that it’s cold and there are a lot of people of Scandinavian extraction.

I’ve been thinking about this a lot, for some reason. I suppose I don’t mind if filmmakers invent a Midwest to suit their storytelling needs, but I think I would prefer that when I am told a film is set in Minneapolis that it actually be set in Minneapolis. I don’t know that it’s too much to ask television writers and film writers to do some research before they set pen to paper — I do, and I get paid a lot less than they do. And geography can be a marvelous informant for storytelling, as anybody who has read “A Confederacy of Dunces” by John Kennedy Toole will know. Toole’s story is so thoroughly a product of New Orleans that you can follow the events of the novel on a map, and likewise Toole obsessed over the unique personality of his hometown, having his characters drink a local soft drink (Dr. Nut) and spelling out their regional dialect, the Yat accent, which sounds a bit like the Bronx accent. Despite the fact that this novel won a Pulitzer, New Orleans continues to suffer in films. Everybody speaks in Blache DuBois accents and every scene is set in the French Quarter, where it’s always Mardi Gras. I recall a scene in “Dracula 2000” that seemed especially confused about this holiday, showing lackluster groups on balconies (properly called “galleries” there) tossing beads down to a celebratory throng below, who caught the beads and then threw them back up to the people on the balcony. This is not how it’s done.

I watch repeats of “That 70’s Show” now and again, because I find it intermittently enjoyable. (Hey! It was also filmed at CBS Studio Center!) But I can’t help but think about what a wasted opportunity it is. It’s set in Milwaukee, which is another go-to place for Hollywood when they want to represent the Midwest (“Happy Days” and its spinoff “Lavern and Shirley” were also set there), but never actually looks like Milwaukee. “That 70’s Show” was a bit unusual in that it featured two actresses, Mila Kunis and Laura Prepon, who are both of Russian Jewish extraction — in fact, Kunis was born in the Ukraine and speaks fluent Russian. As it happens, Milwaukee has an enormous Russian Jewish community. Thanks to a massive wave of immigration in the ’70s and ’80s, Russian Jews represent about a quarter of the total number of Jews in Milwaukee and surrounding suburbs. Would the show have suffered had it actually been set in a Milwaukee suburb, instead of a fake Milwaukee suburb, and made use of some of the actual details of Milwaukee, such as its Russian Jewish community, which its cast was in a unique position to dramatize? I suppose the answer to that is a matter of taste, but, for my tastes, storytelling benefits from specificity.

It’s not like it’s never been attempted in Hollywood. Dashiell Hammett’s Philip Marlowe had his office on Hollywood and Ivar, and his detecting took place at real locations that can be pinpointed on a real map of LA.  James Ellroy’s books also take place in the actual Los Angeles, and intersect with LA’s actual history.

I don’t demand it all the time, and I’m not going to get it all the time. For the most part, when Hollywood represents itself, it’s a place curiously devoid of Hispanics, just like Mary Richard’s Minneapolis, despite the fact that they represent somewhere between 48 and 55 percent of the population of LA. The Midwest is usually going to be represented by picking a city with a recognizable name, almost at random, and simply dropping street names or references to weather to establish credibility. I know to expect this, and I’ll generally forgive it.

But once in a while, when a film is set in a real location, I’d like to see somebody start from a real place, turn the corner, and actually see what’s around the corner. I’d like to see something that represents the actual population of the location, and their distinct culture or cultures, and feel like, wow, this is a film that’s made by somebody who really knows the place they are filming. There it is, on the screen: That’s actually Minneapolis.

‘Contagion’ and the problems with location