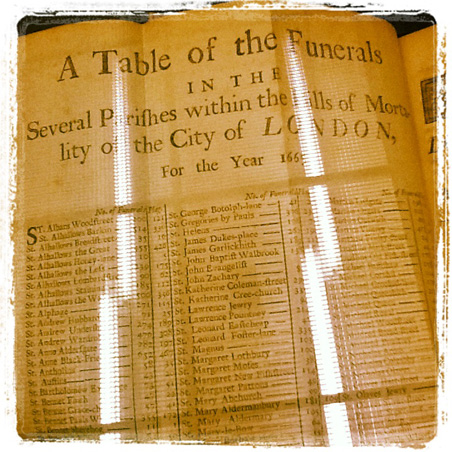 MinnPost photo by Max Sparber
Deaths during the Black Plague: from an exhibit at the Wangensteen Historical Library

I suspect I am predisposed to enjoying medical-themed exhibits, as I come from a medical family. My father, now retired, was a research professor on the subject of psychopharmacology, while my mother is a pharmacist. Dinner-table conversations would often revolve around various drugs, their effects on the brain, and their side-effects. I imagine this is also the sort of conversation you hear if you’re the child of junkies, albeit perhaps excluding my parents’ vocabulary, which included phrases like hippocampus and basal ganglia,.

But, then, perhaps medical-themed exhibits are just natively awesome. Many Minnesotans probably remember the Museum of Questionable Medical Devices, formerly housed at St. Anthony Main, now part of a larger collection at the Science Museum. The various devices are off-limits to questioning hands now, but when it was part of its own museum, you could touch and try out pretty much everything. These include orgone boxes, which were supposed to accumulate sexual energy, and phrenology helmets, which were supposed to measure the bumps on your head for clues to your character, including a score in something called “sexamity.”The only device that was truly off-limits was something that used to be common at shoe stores, a box that patrons could insert their feet into and then see their own foot bones. It was an X-ray machine, it actually worked, and it probably caused cancer.

In New Orleans they have a pharmacy museum, which used to obsess me, and I don’t think it is simply that I am the son of an apothecary. Victorian pharmacies were more like herbalists than contemporary drug dispensers, and almost everything they offered was a mixture of plant life, an alcoholic tincture, and liquid opium. The places smelled great, served cocktails and soft drinks (in fact, the creator of Dr Pepper was a pharmacist, and his soft drink was intended to taste the way his pharmacy smelled), and was probably as useless as much of what was on show at the Museum of Medical Questionable Devices, and sometimes as deadly as the X-ray shoe box. Museums of medicine are necessarily, to a large extent, museums of failed medicine — the New Orleans Pharmacy Museum had a pacifier created for Victorian children that was made of lead, because children, as anyone who has discovered them eating paint knows, like the taste of lead. Brilliant. Before the scientific method, medicine seemed about as likely to kill the patients as leave them be, and decidedly unlikely to cure them. It was a world of quackery and best guesses, and that’s what’s on display right now at the Owen H. Wangensteen Historical Library of Biology and Medicine on the University of Minnesota campus.

First, there is an exhibit called, cleverly, “Take Two Lyllie Rootes and Call Me in the Morning,” which is a collection of botanicals and medical receipt books, the latter phrase containing a bit of outdated English. “Receipt book” in this instance means “recipe book,” and that’s precisely what’s on hand: a collection of herbal cures for illnesses belonging to one Mary Pewe, who lived in England sometime between 1630 and 1690. Who was Mary Pewe? Nobody seems to know, although she was likely the wife of a relatively well-off landowner, and she served as a sort of combination small-town doctor and one the witches that gathers around a bubbling cauldron in “Macbeth.” The books are genuinely glorious, many handwritten in a crabbed, careful script, others containing exquisite illustrations of plants, and some containing lists of people who died from the bubonic plague.

On the subject of the plague, a lot of Mary’s recipes seemed to be advice on how to “break a pestilent sore,” which is something I hope never to have to attempt, although, thanks to Mary Pewe, I now know how to do it. Simply take the brains of a boar, combine it with the poor creature’s stones, stamp it all together and place the mixture on the sore. “In the manner of plaster,” the book tells us, “it will break incontinent.” Marvelous.

But there are all sorts of cures on hand at the library, including one for syphilis that includes white wine, cayenne pepper, mutton, fennel and mustard. Perhaps you’ll excuse me for saying so, but, with the right setup, I could whip these exact ingredients into a romantic meal that’s more likely to cause the transmission of a social disease than cure it.

And there is some handy advice on how to discover if a child has worms, although perhaps it only works on a childe who has wyrms. It involves, basically, covering a feather with spices and then putting it on the babby’s bellybutton. If the feather falls, the wee bantling is parasite free. If the feather sticks, you have a mite with mites of his own.

Mary Pewe’s books also offer some advice for dealing with melancholy, one which suggests that maybe a cocktail before bedtime would help. Another combines rare insects, stones, amber and ambergris, the latter of which is intestinal waste from a sperm whale. Then you add borage and gold to the liquid and there you have it, an expensive and impossible to procure drink that will help nothing at all. At least the ambergris is unlikely to be toxic — it’s been used to flavor food and cocktails for ages, and Charles II loved to eat eggs and ambergris. He lived to be 54, but back in the mid-1600s, when he lived (and when this collection of books dates from), the average life span was about 35, so he was relatively aged.

Melancholy, of course, was an early word for what we now diagnose as depression, and there is a second exhibit at the library on just that subject. Specifically, it details one Charlotte Perkins Gilman, who not only had the misfortune to suffer from depression but also the misfortune to suffer it at the end of the 19th century. Worse still, she consulted with a fellow named Dr. S. Weir Mitchell, who has his good qualities — he was a patron of the arts — and his bad qualities — the way he treated depression. He conceived of something called the “rest cure,” which involved, well, locking the afflicted person away and treating them like an invalid for months and months and months. As Wikipedia dryly notes, “It was not effective and caused many to go insane or die.” Weir primarily prescribed the rest cure to women, whom he saw as being inherently hysterical; he was working at a time when women were seen as having especially delicate emotions and feverish brains, and something as simple as an education could set them off.

Gilman was educated, and she was bright enough to know the rest cure wasn’t doing her any good, so she rejected it, along with her entire life at the time — she separated from her husband in 1888, feeling that doing so was necessary for her mental health. She then wrote a short story about the rest cure called “The Yellow Wallpaper,” which can be found online here. It’s a first-person account of a descent into madness as the result of Dr. Weir’s cure, and ends with a scene that is genuinely demented, in the literal sense of the term.

The story is considered an early feminist classic, and Gilman became an activist for women’s causes, which this exhibit addresses. It glosses over some of Gilman’s sketchier qualities — her views on immigration, as an example, would have made her a popular speaker at a contemporary Tea Party rally. But, then, this is a museum of medicine, not of politics, and Gilman was among the first people to offer both an insider’s look at severe depression and the failings of medicine, which, in her time, was less a science than a fiction, invented out of whole cloth and then never tested for effectiveness, and the best one could hope for from a doctor was at least a halfway decent cocktail he had invented while seeking a cure for ennui.