I’m a bit of a Johnny-come-lately to the world of podcasting. After all, the word has been around since at least 2004, when Aled Williams mentioned it in The Guardian as one possible name for a phenomenon that has been around since perhaps 1998, when people began putting audio content up on the web.

I mean, I have listened to podcasts on and off for ages now, but haphazardly. There has been so much else to distract me, aurally speaking, from audio books to the explosive growth of music sharity blogs, on which dedicated audiophiles digitize albums that have long been out of print. There’s so much, and it’s all … so … free.

And then the Twin Cities has never had a podcasting scene. There are a few individual podcasters. There are the Mustache Rangers, as an example. They’ve been improvising oddball space adventures for 212 episodes now, and have developed what seems to be some genuine popularity on iTunes. Minnesota Public Radio offers a selection of podcasts, some edited together from stories that appeared on the radio, some, like “Musicheads,” created exclusively for the web. “Musicheads” consists of a discussion between hosts from The Current about whatever music has attracted their attention most recently. This is a format that is both quite popular among podcasters and something the medium is uniquely suited to, as music journalism has always suffered from the question of how to describe music. In this instance, the hosts need merely play the song they discuss.

There’s also PodcastMN, The Sound of Minnesota, which sometimes talks about music, sometimes about  some other local topic (they had the Mustache Rangers as guests recently), and, to a large extent, Minnesota podcasts are in general this sort of miscellany of Minnesota sounds — bookstores will offer selections of in-store readings, political organizations will broadcast speeches, there are even local judges who podcast about judicial issues. There is one theater-goer, Joshua Humphrey (who has appeared as an actor in one of my least reputable plays), who podcasts about the Twin Cities theater scene with an admirable mixture of dedication and isolation. So we have our podcasters.

But the local podcasting community has never coalesced into a scene, as far as I can tell. At least, not as happened with the local blogging community a few years ago, where we all read and commented on each other’s blogs, went to each other’s parties, tweeted back and forth, and helped out with each other’s  projects. It was a community that gathered around a coincidence of technology, in that we all used online blogging platforms to communicate something, but, in truth, there wasn’t much more to it than technological kismet. The community fell together and drifted apart, as each pursued their own interests, and as blogging, as a whole, began to decline in favor of microblogging, such as Twitter and Tumblr, and the rise of social networking.

Additionally, I made it a point, when I edited MnSpeak, to gather the best blog posts I could find, a tradition started by the site’s founder, Rex Sorgatz, and continued, on occasion, on the blog Because Emily Says So. Twin Cities bloggers, for a while at least, were not working in isolation, and were aware of what else was going on in their particular, loosely affiliated community. Local podcasting has never had that sort of spontaneous regional structure, which, as I understand it, isn’t all that common anyway. And so local podcasting never came to my attention the way blogging did.

But I think we’re entering a sort of golden age of podcasting — it’s probably been going on a for a few years now, but I’m just catching up. One of the advantages of this job is that I must be out and about all the time, and, as a result, I have a lot of time during which I am transporting myself from one place to another. So I have been listening to an awful lot of podcasts. And it’s really exciting.

I have some background in radio. I was with the University of Minnesota’s student radio station back when it was WMMR (in fact, I gave the station its briefly contentious slogan “music should hurt”), and that’s where I did my first arts reporting. I also volunteered at KFAI for some time in their news department where, on occasion, they allowed me to report about the arts scene. I did this despite never having really been a radio listener. Morning zoo-style deejays are just so irritating, and I don’t like having other people choose my music for me anyway. Talk radio has been a cesspool for years. There’s National Public Radio, I suppose, but as James Crotty once wrote in his book “How to Talk American,” people who listen to too much NPR always seem to get really weird.

But even if I don’t like radio as it is, I had a great interest in radio as it once was, and radio as it might have been. When I was a boy, I bought an odd thing at a garage sale. Specifically, I bought a comic book based on the television show “The Partridge Family,” about a light-rock-singing family that travels in a psychedelic school bus. But the comic book wasn’t about the singers, it was the band’s manager, Reuben Kincaid, explaining that when he was a boy, he listened to radio dramas. The comic book then listed the various dramas, with appropriately dramatic illustrations: “The Shadow,” who has the power to cloud the mind of criminals; “I Love a Mystery,” about a boyish detective agency; “X Minus One,” a science-fiction radio drama. For whatever reason, the descriptions of these shows struck my childhood imagination, and so I sought out recordings of them, and listened to them obsessively.

And in my 20s, I stumbled upon a book called “Radiotext(e),” from AK Press; this was a selection of essays about experiments in early radio broadcasting and radical alternative theories of radio. But radio was then a limited resource, and controlled by the government. They decided who would have access to the limited available bandwidth, and they, along with the market, would govern what went out over the airwaves. And so we end up with morning zoos, talk radio, and at least there is NPR, as weird as it makes us. 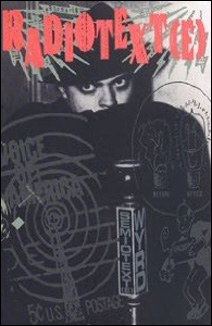 Photo courtesy of AK Press
Radiotext(e): A book about the lost possibilities of radio, which may be realized by podcasting

But podcasts are ungovernable radio, and I am starting to rediscover my long-lost excitement for the possibilities of broadcasted sound. I’ll provide a short list of a little of what I am listening to. Some of it actually does appear on regular radio shows, but the rest of it is just too oddball, too idiosyncratic, too personal, or has too limited an audience to find its way to the airwaves. And it’s funny to me that I have discovered that my issue with NPR isn’t that it makes us weird, but that it doesn’t make us weird enough. And, typically, I have started my own podcast, the first episode of which I’ll plug in at the end of this article. It is, as regular readers might expect, about alcohol, and includes a review of the Twin Cities Grill at the Mall of America, as well as a taste testing of Old Grand-Dad Bourbon and an especially naughty drinking game.

In the meanwhile, here is some of what I am listening to nowadays. All cost nothing to listen to and available through iTunes.

RadioLab: Ostensibly about science, hosts Jad Abumrad and Robert Krulwich instead take an anecdotal look at just how wild and puzzling our world is, bolstered by discussions of experiments that yielded unexpected results, field recordings of people doing entertainingly mad things, and one of the most relentlessly inventive uses of interviews and sound effects I have ever heard.

The Age of Persuasion: Host Terry O’Reilly has created a radio show/podcast that looks at the history of advertising, which, as “Mad Men” discovered, is exceptionally fascinating. Here are the real stories of Madison Avenue and beyond.

How Did This Get Made: While there may not be a podcasting community in the Twin Cities, there seems to be an exceptionally lively one in Los Angeles, made up of young actors and comedians. In this case, the show is hosted by Paul Scheer, June Diane Raphael and Jason Mantzoukas, who all share my taste for exceptionally trashy and ridiculous Hollywood movies. They meet every week to discuss the film they have just seen, not so much to mock it for its awfulness as to mutually thrill at the lunacy that results from a popular film falling apart.

The Sound of Young America: This is one of three podcasts I will recommend that is connected with Jesse Thorn, and this is one that you might hear on National Public Radio. Thorn hosts an interview show in his LA domicile (everybody from “How Did This Get Made” has guested, from what I can tell), and he’s a terrific interviewer. Additionally, it’s sort of amazing who shows up in his living room — one of the perks of LA living, I guess, is that the biggest people in the world are on hand to wander over to your house.

Jordan, Jesse, Go!: One of the pleasures of “The Sound of Young America” is Jesse Thorn’s dry, oddball wit; in this podcast, he is joined by his friend Jordan Morris, and it’s just an opportunity for them to shoot the breeze for an hour per week with a guest. There are a lot of podcasts like this, and most are painfully unfunny. This is quite the opposite.

Judge John Hodgman: You probably know John Hodgman as the PC on the Mac vs. PC commercials, or as the author of the enormously entertaining “The Areas of My Expertise,” or perhaps as the resident expert on everything on “The Daily Show.” In this Jesse Thorn-produced podcast, Hodgman takes on the role of judge, arbitrating people’s disputes, which tend to be pretty silly. It’s a bit of a satire of television judge shows, which I adore, but because television judge shows are always about unpaid loans or cell phone bills, whereas this is about minor squabbles that would never go before a real judge, it winds up being a lot more interesting.

And, finally, here is my podcast, “Bunny and Coco Get Smashed,” which should be available on iTunes in the next few days.