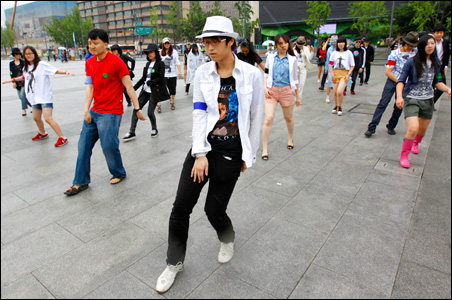 There were dancers, after a fashion, on Nicollet Mall yesterday and the previous day; they’ve shown up around town since the start of August, and will remain until Oct. 6. To be more specific, there were a dozen or so people of various ages, including a group of artists from China, all of them listening to earphones and performing rhythmic movements with more or less ability. Some performed hip-hop dance moves. Some performed the solo psychedelic hand-waving motions that I will call the Manic Pixie Dream Girl dance, with credit to film critic Nathan Rabin, who came up with the term. Some performed moves that seemed balletic or based on Tai Chi. And some seemed to be performing Elaine Benes’ spasmodic solo dance from “Seinfeld.”

This was organized by a group called Grace MN, which sounds like the name of a megachurch but is instead, in their words, a “conceptual and behavioral art studio.” These dancers were part of something called “Don’t You Feel It Too?” and there isn’t much to it except that volunteers don headphones and dance in unexpected places. I don’t have anything to say about this, really. If people want to dance someplace, go ahead and dance. It’s more entertaining than the sorts of people who you usually see clumped up outside buildings downtown, who are generally smoking with hunted, furtive looks, and universally seem to regard the streets and sidewalks of downtown as an ashcan.

However, when I first saw the dancers downtown, I flew into a rage. “Please stop dancing badly,” I tweeted. “I will not buy your product/join your church.” This is an unusually uncharitable thing for me to tweet about an art event, and I regret tweeting it. But let me explain myself: I thought it was a flash mob.

And this is what I have come to write about. Because there might be no social phenomenon that is simultaneously as degraded and as important as the flash mob. For those of you unfamiliar with the term, there’s not much to it. It was coined by a senior editor at Harper’s Magazine, Bill Wasik, back in 2003 to describe spontaneous events organized via any sort of instantaneous online media, such as emails, or text messages, or social media. Wasik actually intended the flash mob to be a satire, poking fun at collective action that nonetheless presents itself as nonconformist. After all, when you get a mob of people together doing things like shopping for a “love rug” — which actually was one of Wasik’s earliest flash mobs — they are all conforming to the same nonconformist act.

Strictly speaking, this is the only sort of thing that should be called a flash mob. They’re basically an updating of the 1960s happenings of artist Allan Kaprow, but made instantaneous by new tools of communication and, thanks to Wasik, shot through with a cynical parodic sensibility.

But things never remain within the narrow confines of one definition. Flash mobs were quickly taken over by people without Wasik’s sense of satire, in many cases to organize seemingly spontaneous dances. The most famous of these is probably the one that broke out in the audience for the kickoff party for Oprah’s 24th season, at which the Black Eyed Peas sang “I Gotta Feeling.” A few people started a synchronized dance in the first row, and then more joined in, and, eventually, 20,000 audience members all participated. And, to give the spectacle the credit it deserves, there is something genuinely astonishing about realizing that 20,000 people are in on an enormous prank, and seeing them all dance the same moves at the same moment.

At the same time, there’s considerable, well, let’s call it “mission creep” going on here. Already a lot of the spontaneity is gone. It’s less a sudden gathering organized using cell phones or email, and more of a publicity stunt. And, as the entirety of Oprah’s 24th Season opener was a promotion for Oprah’s show, suddenly the flash mob had become definitively a tool of promotion. (Note: purists, at this point, prefer that we call such groups “smart mobs” rather than flash mobs; some would also prefer we not use double negatives or split infinitives, but their chastising ain’t likely to change nothing, and what are they on about?)

You can’t have Oprah turn the flash mob into a PR stunt without every lazy, unimaginative advertising and PR firm in America suddenly leaping on the bandwagon. So, for a while, it seemed like it was impossible to shop for groceries without paid actors suddenly launching into operettas about the magnificence of some brand of toilet paper, and you couldn’t walk down the street without a gang of identically dressed Sherlock Holmses chasing you to promote a film about the famous detective. PR people absconded with the flash mob and turned it into the same tedious thing they turn every single legitimate social development: a commercial. There’s not a single new online innovation that people won’t try to use to move product, because why would there be any social or creative undertaking that can’t also double as an ad? Why would there be any place in this world where we can’t be sold to? I imagine marketers lay awake at night, furious that they can’t tap directly into our dreams to hawk liquor and cigarettes, and can’t break into our houses to be there when we wake with a humorous skit about the benefits of the antacids and breath fresheners they are promoting.

None of these so-called flash mobs make use of new media in any particularly inventive way, mind you. They’re usually the product of casting agencies or auditions notices on Craigslist, and they’re about as spontaneous as a bank robbery in a heist film. They probably actually should have a name other than flash mob, but I won’t be the one to offer a suggestion, as my suggestion would include an epithet.

This is not to say the tools for creating spontaneous gatherings have gone unused. No, they’re both used for political purposes and for criminal activities. I’ll mention the criminal activities first, and then dispense with them, as it’s a discussion that seems to inspire a lot of racism. In the past year or so, there has been a rash of mass burglaries by young people who, at a cue offered via text messages or social media announcements, converge on one store en masse to ransack it. It’s a clever, if definitively criminal, use of new media: So many people show up, and they work so quickly, that stopping the event is impossible, police cannot respond in time, and arrests are difficult.

Because the criminals in these instances have been predominantly black, this has given our country’s noxious racists a new opportunity to wave their fingers at the African-American community as a whole, to make the same tired complaints that somehow black people have a unique culture of criminality, and to use “flash mob” as a replacement for the similarly problematic phrase “wilding,” which has lost its cachet in recent years. Meanwhile, Wall Street has robbed America blind for decades, and it doesn’t need to use text messages to do so. Most of those guys are white, but you won’t hear one peep about this being indicative of a culture of criminality that the white race has somehow produced through, I don’t know, films like “Bonnie and Clyde” and rock songs that promote luxurious lifestyles and casual disregard for the law. No, it’s only an issue when a few dozen black kids steal several thousand dollars worth of Ding Dongs.

These same tools are also being used to organize social protests. Locally, we get to enjoy things like groups of self-proclaimed gay barbarians converging on the Bachmann’s counseling clinic to beg Marcus Bachmann to help them, and nationally the tools of smart mobbing have been so incorporated into the world of the protest that San Francisco’s heavy rail public-transit system, BART, recently (and illegally) shut down cell-phone access along the system to stifle a protest regarding a fatal shooting of a 45-year-old by BART police. And it’s not just in the U.S. — Iran’s failed Green Wave after the 2009-2010 presidential election was mostly communicated through online media and organized in the manner of flash mobs, as was the more successful recent Egyptian uprising. This sort of political organizing probably deserves its own name as well, but they’re definitely kin to the flash mob.

We’re at a time when information can move faster than it can be vetted or controlled, for both good and ill, and mass organization can happen almost in an instant. This wasn’t possible before the explosion of new tools of communication that has happened in the past decade, and it’s not going to slow down. It’s a sort of hit-and-run future we can look forward to, where everything including aid in emergencies, public entertainment, small business ventures, and revolutions are organized to pop up for a few moments and then disappear.

You may be in the middle of a flash mob right now, and don’t know it yet.

The rise and fall and rise of the flash mob