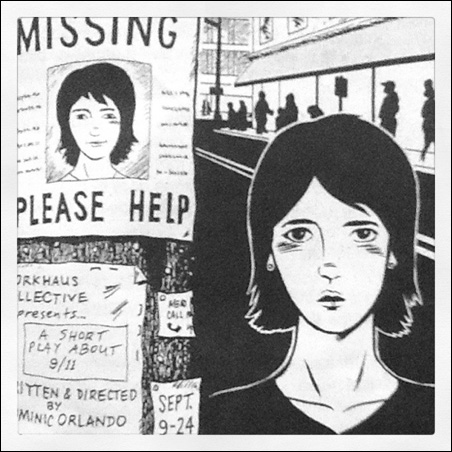 My experience of 9/11 is linked to theater. It’s just one of those coincidences of timing, one of those “where were you when you heard the news” sorts of thing, but I was at the University of Minnesota, where I had re-enrolled and was pursuing a degree in theater. I arrived on campus to the news that the towers and the Pentagon had been hit by airplanes, and I quickly went to an on-campus computer kiosk to see what news there was. It being 2001, the web didn’t have the immediacy it does nowadays; there was scant information, and it was slow to update.

So I went to my first class of the day, an acting class taught by Kym Longhi, whom I have since worked in collaboration with on a few plays, providing the text that she spoke in the play (she is, in fact, in “A Gift for Planet BX63” by Off-Leash Area, which is playing now and which I wrote the dialogue for.) Longhi’s background is in physical theater, and so we worked our way through various movement exercises with a pall over the class. There was a young women in the class with friends in New York, and she would excuse herself every so often to try to contact them on her cell phone. Finally, toward the end of class, she reached them. She returned to class stunned. “Both of the towers have collapsed,” she told us.

My next class was an introduction to theater, and it lasted for just long enough for the professor, Michal Kobialka, to announce the events of the morning to the class. He quickly received word that school was then canceled for the rest of the day and we all went home, to do what I suspect most people did then: watch the events unfold on television, and attempt to contact friends and family in New York to be certain they were all right.

I went to New York a week later. I flew to Troy, a small city near Albany, to work on a script I had been hired to write for a theater company out there. I was one of two people on the airplane, and we both eyed each other suspiciously. For some reason, while I was out there, I contacted a playwright named Lisa D’Amour, whom I had known in Minneapolis, where she was working with the Playwright’s Center for a year, but she was in Manhattan for a play she had written. It was canceled. She told me that one of the unexpected side-effects of the attacks was that theaters left and right were closing their plays. Nobody wanted to see plays just then, and the theaters couldn’t afford to play to empty theaters.

Playwright and director Dominic Orlando was in New York when the towers fell. He wrote what must be one of the first theatrical responses to the event, titled “A Short Play About 9/11,” scripted in the months after the attack. The play has, as I understand it, gone unproduced for 10 years, and was debuted this past weekend by Workhaus Collective, a company Orlando cofounded, in a production that Orlando directed. The play is, indeed, short, consisting of a series of six scenes about three characters: a television comic whose career may be ending as a result of his on-air joking about the event, a sodden Russian biochemist who has become something of a television news expert about chemical attacks, and a young woman who may have been in the towers on the day of the event, and has lost her memory as a result. They meet in Times Square at the end of the play, which has become something like an impromptu vigil and celebration, and they desperately try to be kind to each other.

That’s the whole play. It occasionally offers some bigger-picture commentary on our country’s march to war after the attacks, rather ingeniously placing them in the mouths of the television comic and the Russian, which gives Orlando license to say whatever he wants, as both characters are presented as people who can’t be trusted to be circumspect in their opinions. But, even now, with 10 years of perspective, I am not sure the big picture is the sort of thing a play can tackle well. It’s an epic tragedy, and plays are closer to short stories.

What interested me about Orlando’s production was its feel of on-the-ground reporting. Some of the best moments in the play come from secondary characters, such as a downtown boutique owner whose relentless cattiness can’t cover an impulse for compassion, and who muses about the smell of the fallen towers, which, at the time of the play, is still burning, and is likey toxic. With one exception, the New Yorkers in this play aren’t crying out for revenge. They’re desperate for normalcy, instead; they want to rebuild.

Everybody in the play is chagrined. The television comic is played by David Hanbury, who is perhaps best-known for his character Mrs. Smith. He is an actor who is extraordinarily practiced at the sardonic and the absurd, which are his character’s default reactions here. But he squirms with self-loathing every time he is called on it. He’s right about the way the fall of the towers has started pushing this country in a loathsome direction, and he’s right to speak against it, even just as part of a late-night comedy routine. But he loathes himself as well. Hanbury’s job in the play is to be a truth-teller, and that’s a task always marked by cruelty, and, as the play progresses, he just doesn’t want to be cruel anymore.

Likewise, the Russian, played bigly and loudly by Luverne Seifert, is a man of regrets. He has helped develop weapons of mass destruction, one of which he claims to carry in a vodka bottle in his pocket. He’s publicly falling apart at the start of the play, and by the end of it has become a slovenly drunk, mostly, it seems, to suppress a feeling that people can be so terrible that perhaps they earn whatever destruction comes their way. These are big characters with big moments, and they often seem like they were chosen so that Orlando could explore large ideas. But, for my tastes, the most striking moment in the play is one of the smallest — it’s one of the few memories that the amnesiac girl still has, and it torments her. It’s not from 9/11, but from years previously, when she witnessed a young woman become violently ill on a subway train. The amnesiac, played by Laurel Armstrong, recounts this experience with almost expressionistic shame, as her response to the sick woman was not concern, but rage.

The play is a snapshot of a terrible moment, 10 years ago, playing out on an almost bare stage designed by Paul Herwig (also of Off-Leash Area) which mostly consists of two massive black squares on the floor, likely representing the destroyed World Trade Center in the same way the New Yorker represented them after 9/11 by printing an entirely black cover with silhouettes of the tower printed in a very slightly darker shade of black — images designed to illustrate absence.

Like any snapshot, “A Short Play About 9/11” is necessarily incomplete — it’s a slim representation of a single moment in time. But it’s an unexpectedly hopeful snapshot, showing people at the edge of a tragedy attempting to band together, to comfort each other, instead of turning on each other. It’s a natural human impulse, and it’s one of our best impulses. Unfortunately, the event itself was surrounded by millions of additional snapshots, and they told takes of revenge, and unthinking nationalism, and xenophobia, and it twisted our country away from an impulse toward rebuilding and instead to an impulse toward destroying. Ten years after Orlando wrote his play, knowing what was to come afterward, it’s a very sad thing to see. In the face of tragedy, we could have shown the world ourselves as a nation at our very best. Instead, we couldn’t have been much worse.