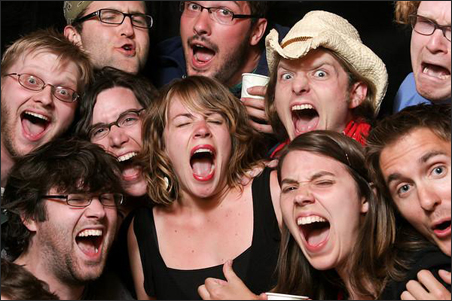 I don’t know about you, but I’m feeling a bit of post-State Fair malaise. There was a time, not so long ago, when I knew exactly what I would be doing for entertainment every single day, and it mostly involved cooing at piglets and eating food on a stick. What to do with myself now?

Well, there’s still an echo of the Fair in the Twin Cities. For instance, there will be a CD release party tonight for the Como Avenue Jug Band, a rollicking gang of friends playing self-taught music on self-taught instruments. Moreover, in the manner of the best jug bands, some of those instruments are just stuff you’d find in a kitchen. I played with them a few years ago, back when I was in a dirty hillbilly band, and they know how to whoop it up with the best of them. And not only are they named after the street the Minnesota State Fair is on, but their CD release is State Fair-themed! As it happens, the North Dakota State Fair was washed out this year, because of poor weather and poorer levies, and so the Como Avenue folks decided to go ahead and throw their own fair for North Dakota. It starts tonight at Club 331, and the lineup of guest stars features some of the best in local country-tinged folk music, including the Roe Family Singers and the Prairie Fire Lady Choir.

But what of food? After all, one of the great adventures of the State Fair is the opportunity to comestus various regional and ethnic comestibles. Well, we’ve got that covered as well. Northeast’s popular East European deli, Kramarczuk’s, is throwing a Kielbasa Festival this weekend. There will be music, of course, including polka, Latvian folk music, and Finnish-American dance music. But while you may stay for the music, go for the food, the list of which is long and lip-smacking: Moroccan lamb, three potato-cheese pyrohy, vatrushka, strudel. There will be a lot of beer on hand as well, but take my advice and go around the corner to Surdyk’s liquor store to pick up a bottle of the plum brandy called Slivovitz, which is popular throughout Eastern Europe and is functionally the national drink of Serbia. This is a drink that not only grows hair on your chest, but later sets fire to that hair. Živjeli!

I’ll tell you of something you used to find on the State Fair Midway, but is, alas, no more: They used to call them hoochie coochie girls, and they bumped and grinded in a tent that the children couldn’t get into. In fact, the word hoochie coochie comes from a dance that originated at the Philadelphia Centennial Exhibition of 1876 and then exploded to national popularity at the Chicago Word’s Fair of 1893, proving that fairs and burleycue go together like pink and lemonade. There was none to be had at this year’s State Fair, but, thankfully, we have quite a lot of burlesque in the Twin Cities anyway. For instance, Saturday night at the Ritz there will be The Playful Peacock Show, founded by Ophelia Flame and Gina Louise of Minneapolis’ highly regarded Lili’s Burlesque Revue and designed to train up-and-comers in the art of the tease. So I’ll see your zivjeli and raise you one ooh-la-la.

Actually, it’s quite a weekend for dance in the Twin Cities. If Little Egypt isn’t your thing, well, how about tap? Ballet? Modern? It all has a new home in Minneapolis, as the former Shubert Theatre completes its multi-year (and one-block — it was rolled to its current location from Block E) transformation into the Cowles Center. There’s a spendy, soon-to-sell-out dance showcase on Saturday night, and then on Sunday the Center opens to the public for a free celebration. There’s far too much going on Sunday to detail it all, so I shall mention some highlights: there will be presentations by James Sewell Ballet, Zenon Dance Company, and ARENA DANCES, as well as theatrical performances by physically inventive local companies, including Green T productions, which makes use of a variety of disciplines from Asia, and Live Action Set, who will be performing the entirety of “The Lord of the Rings” trilogy featuring just a few actors in just eight minutes.

Finally, if the State Fair is known for anything, it’s for its love of crafts, and, for many Twin Citians, that love continues year-round. Look no further than the Swap-o-Rama-Rama, starting Sunday at 11 a.m. at the Hack Factory. What is it? At its core, it is a clothing swap — bring a bag of clothes, or get a bag of clothes, or just trade clothes at the event. But it’s also a DIY opportunity, as the Hack Factory will be filled with various stations that offer the opportunity and supplies for attendees to take their traded clothes and make them into something new. Here’s hoping they have a station offering indigenous seeds, as it’s time we took our regional obsession with seed art public in a new way, with clothes coated entirely with multicolored grains.

Of course, there is a risk of being stalked by hungry birds. But, you know something? That was true at the State Fair as well.